With the slopes of the Sierra Madre boondocks, the lake shore of Laguna de Bay and the green ricefields in between as his childhood playground, Tutubi was able to experience so many things many kids these days won't even bother with malls in their minds and computers, cellphones and PSPs in their hands.

On the slopes of Sierra Madre, he learned to climb trees or harvest fruits e.g. lanzones (langsat), santol (wild mangosteen), aratilis (muntingia), mami and dambo (malay apple) and catch spiders for spider-fighting (spider wrestling) and sometimes trek up to the Tatlong Krus (Three Crosses) on top of the hill fronting his hometown and the waterfall down to the cold water of the creek feeding the river.

In the ricefields, he used to gather cherry tomatoes, and other vegetables grown alongside rice, run after field mice in muddy fields, gather suso (snails) and kuhol (escargot for the French) and lastly, the subject of this post, catch and eat edible frogs, called palakang kabakab, by following farmers preparing the rice field for planting by mowing it with a carabao or hand tractor called kuliglig or kubota or people using some sort of DIY gizmo for electrofishing. Some frog hunters hunt the edible amphibians at night using flashlights where frog eyes can be easily spotted. 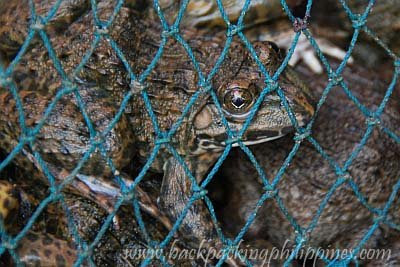 
The frogs he caught were decapitated by chopping off the head and maimed by cutting the limbs (at least the webbed part). The frogs are skinned alive using ash on his hands to peel off the slippery (and icky) skin, then eviscerated to remove the entrails. The lean meat was cooked by deep frying, the only cooking style he knew at that time.

This time, years after he saw and ate icky, exotic creatures he used to catch and eat, Tutubi saw live frogs for sale at the Lung Center Sunday Market that quickly brought back childhood memories of "Tutubi the Hunter" days. He bought half kilo of the leaping amphibians, six pieces in all, that he had decapitated, maimed and skinned by the frog vendor, unlike in those days when he used to do the "barbaric" task himself. 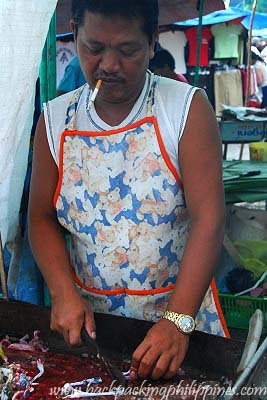 meet the vendor and butcher, from Cabiao, Nueva Ecija doing the dirty job of preparing the frog 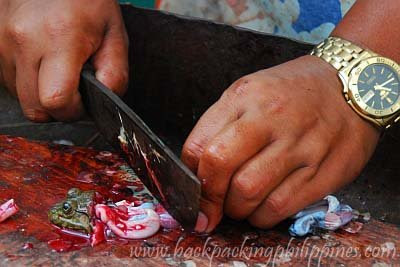 the head of the frog is cut first 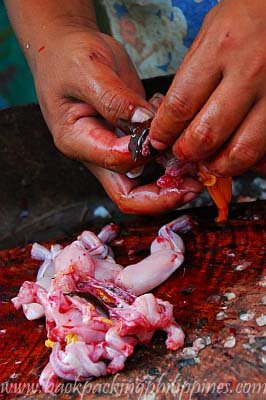 what's left of the frog: lean meat and bones, a gruesome sight! 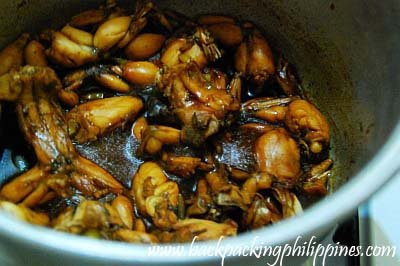 People of Pampanga, with the evident culinary prowess of Kapampangans, are proud of their betute, recipe of frogs stuffed with meat (a la relleno) and marinated in cane vinegar and soy sauce.

So, how would Tutubi describe the taste of frogs? It actually has the texture and taste of chicken unless your mind wants to reject the delicacy from your mouth thinking it's a frog bone tickling your palate.

Where to buy edible frogs:

A kilogram of live frogs, locally called palakang kabakab in Laguna, costs P250.00 (about US$5.50) at the Lung Center Sunday Market. There are cheaper ones sold at stalls on the highway of Laguna, particularly on the stretch of Bay, Calauan and Victoria towns (an area dominated by gardens selling plants, seedlings and flowers).

i have tried eating this when i was in college.. for our marketing something project... sarap din parang manok lang.. ^_^

OH MY GOD! suddenly, i regret scrolling down. haha. interesting. i know i love eating, but i honestly can't imagine stomaching that. haha.

There's something gross when you think of frogs, in the texture of their skin but I've fog legs in Calamba and boy they taste like chicken hehe :)

I have no problem eating as long as it is the right frog ( rice field variety) and not the ones living in the backyard. I will go for legs only though :)

I love palaka too, betute the way my mother made them when I was young. I learned to clean a frog too.

BTW, on the caption of your last pic, did you mean basil leaves or bay leaf? I never heard basil being added to adobo.

I have eaten frog legs when I was a kid and it was good...yeah, it tasted like chicken.

I don't eat frogs. Not too sure why. LOL!

carlotta, expensive at the lung center, cheap near the ricefields :P

Nina, it's all in your mind...it's really good hehe

acey, i should've put a warning before the pagebreak hehe

the dong, just for the exoperience, try it. fear factor ba? :P

bw, maybe you're referring to the toad, not the edible frog variety hehe

punky, header taken on the beach of calaguas island

There are many kinds of edible frogs in the Philippines ...and as far as I know "kabakab" or "kabkab" does not inhabit rice fields... it is much rarer and so it is really expensive! Those that are found in the rice fields are so common and does not command a high price, certainly not reaching 200 peso levels! Also I haven't heard of freshwater sea snake in Laguna de Bay, they can be found in Taal Lake.

anonymous, i grew up in paete laguna where as a child i catch those frogs that we call kabakab, it may be a a "lost in translation" for you. I bought the frogs featured here at the lung center for P250/kilo, quite expensive really but it's the only place i saw frogs on sale in the metro. the duhol of laguna de bay is different from that of Taal but still we call those snake duhol. Duhol may mean sea snake but i'm not sure of it.

munks, please ead the post before asking the question. the answer's there :(

Palakang bukid. That's the only name I know but I wouldn't be able to recognize it had it been stuck to my nose.

I grew up in the city (Sampaloc, in Manila) and only got to try them when we bought a house in Bulacan. There would be hawkers who go around the village selling these frogs when they're in season.

As for the taste, well it's frog. Nearest thing to it would be chicken but that's the same description most people use when they eat bayawak (monitor lizard), snakes (sawa), buwaya (crocodiles), kuneho (rabbits), kalapati (pigeons), pugo (quail) and what have you.

I Will have to visit the SIDCOR market one of these days. I miss eating crispy-fried frog legs.