A favorite haunt of Tutubi on Sunday mornings being just a fifteen-minute drive away or two short jeepney rides from home, the grounds of the Lung Center of the Philippines, with it's shady trees, come alive bustling with activity with food stalls, tiangge and dry goods for sale with regional specialties and products from almost every corner of the Philippines. 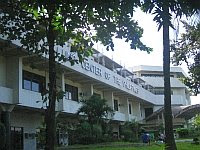 Shopping at the sunday market has become a routine for people near the area to shop for their food supplies for a week to cook at home. Various fish, seafood, meats, organic produce, vegetables, herbs and spices (e.g wheat grass, basil, thyme,) , regional specialties and exotic stuff can be found here at a cost lower than Manila's gigantic malls.

Many people asked Tutubi (a wannabe history buff) why the sunday market is called Sidcor, well, it's called Sidcor since in the 90's it used to be located at Sidcor Plaza, where the no-longer-extant Sidcor Resort also used to be, at the corner of EDSA and Main Avenue, the present site of Makro Cubao. 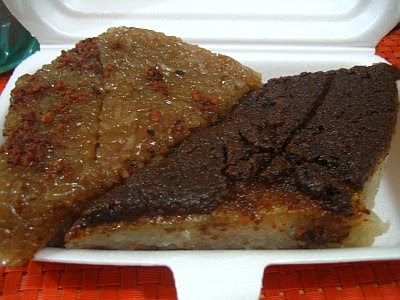 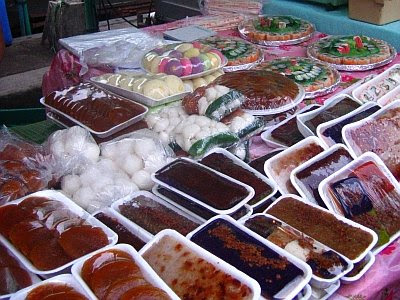 an assortment of kakanin for sale

For lovers of organic stuff, lettuce packs at 3 for P100. For comparison, similar items at SM malls cost P60/each making these organic greens about 50% cheaper.

eggs of Bayawak (water monitor lizard) P130 each (this is not recommended as the bayawak is an endangered species, therefore protected...there are live bayawak on display at the Protected Animals and Wildlife Rescue Center (PAWB Mini-Zoo) inside the Ninoy Aquino Parks and Wildlife just across the Lung Center) 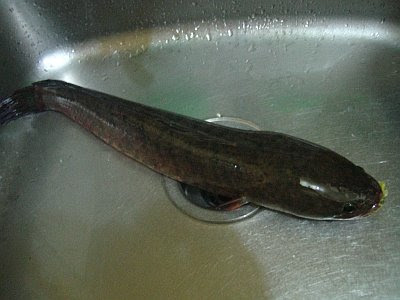 Live Dalag (Mudfish) P200/kilo. This specimen weighs 1.5 kgs and is about 30 centimeters long

Yacon (great for diabetics): P40/kilo (if you want cheaper at P20/kilo or less at wholesale price, look for them on the highway of Nueva Vizcaya particularly Bambang and the cold, upland town of Kasibu)

Vigan Empanada: P60/pc, not worth it though, still recommend the authentic ones at Vigan's plaza 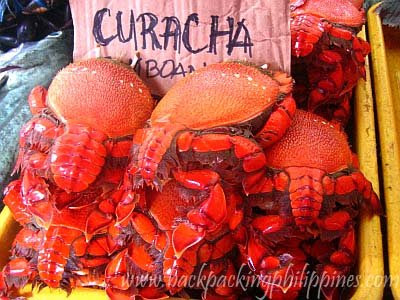 Curacha, (sea crabs) endemic to the waters of Zamboanga, Basilan and Tawi-tawi at PhP550.00/kilo (about $11/kg), expensive, yes, but it's the only place Tutubi has seen the sinfully delicious crustaceans outside Zamboanga City. It's already a steal in these low cost of living Philippine islands.

With various food finds and delicacies present, the Lung Center Sunday Market easily answers the question on where to find hard-to-find items, long before the Salcedo Weekend Market and the Legaspi Sunday Market came to be. The latter two were said to be inspired by the original Sidcor Organic Market in Cubao. The three weekend markets, plus Market! Market in Taguig City and Tiendesitas in Pasig City recommended stops for tourists, locals and foreigners, wishing to sample Philippine cuisine and food specialties without actually going to the actual places.

Lastly, should you happen to get there, note that Lung Center's specialty dish is the exotic BOPIS!

Tip: Use the second gate when parking to avoid the long queue of vehicles entering the first gate. More spacious parking at the left side than those on the right side though farther from the flea market and tiangge stalls.

How to get to Lung Center of the Philippines:

Commute: From MRT Quezon Avenue station, best to hire a cab or if you feel like really commuting, board a bus or jeepney bound for Fairview/Lagro/Philcoa or UP and drop off in front of the Lung Center of the Philippines. (this is opposite the pedestrian entrance of the Ninoy Aquino Parks and Wildlife Center) also on Quezon Avenue. From Manila, jeepneys and buses with signboard Fairview, Lagro and Philcoa all pass by the place. From LRT Monumento station (good for those coming from Cavite), you need to board buses going to Baclaran or Cubao then alight on Quezon Avenue before transferring to a Fairview-bound jeep or bus.

1. if you have a car, from Makati or SLEX, take EDSA going to Quezon City, right turn on Quezon Avenue (ilalim) then enter the hospital entrance gate about 300 meters from the corner of Agham road (the first traffic lights after EDSA). You need to pay a minimal parking fee.

2. From NLEX, it's best to take EDSA then North Avenue, passing by SM North EDSA and Trinoma Mall, right turn on Agham Road (pass by the neo-classical building Office of the Ombudsman, Philippine Science High School (PSHS or pisay) and Manila Seedling Bank) then left turn again on Quezon Avenue to reach the center.

3. From Manila, it's just a "straight" drive from Quiapo's Quezon Boulevard, Lerma, Espana, pass by Welcome Rotonda, to reach Quezon Avenue where the center is just near Elliptical Road and Quezon Memorial Circle.

4. From SLEX or Rizal province via C5, drive straight on C5 then Katipunan Avenue to pass by Ateneo de Manila University (AdMU) campus, turn left on C.P. Garcia (the University of the Philippines campus), right on Commonwealth avenue to make a U-turn going to Elliptical Road (Quezon Circle) then Quezon Avenue where you need to take a U-turn again to get to the other side.

The first and only time I experienced eating curacha was in a restaurant in quezon city. I must say, it's really delish!!! Can't even remember the name of the restaurant butI am hoping to go back there during one of my vacations...

Nice shots. I have heard this before too, I guess this is a fave hangout of bloggers :D.

Kaiser Permanente (hospital) also holds farmers market once a week, different days on different locations, during the weekdays. Haven't been but my brother said they have good selections too.

I guess this would encourage healthy eating if the farmers markets are inside the hospital grounds :D

wow! just a month ago we ate curacha at home. those are deep sea crabs. it came a long way from zamboanga. so tasty! didnt know that it's being sold there.

Love those sumans and sweets man. Now I feel like I want to go to the Pinoy store and score a few hehe :)

That curacha resembles cockroach. The name must've come from the Spanish cucaracha (cockroach). Those must be good, if they cost that much. But I love most of all are the bibingkas. I'm craving for them now.

ang sarap ng mga kakanin. have you tried our special puto and sweet delicacies here in cabanatuan and nueva ecija?

Wow, that place looks pretty much like a feast. I love these kind of places, whenever I'm in France, I always try to find time to go to one of the local markets.

anonymous, i;m a filipino ;P that's why i used mudfish. you mean to say i didn't get what i paid for? i weighed the fish at home and it sure did weigh that much before i took a picture of it on the kitchen sink

The Curacha (English: spanner crab or (red) frog crab) by itself is bland and not very flavorful. The secret to great tasting curacha is in how it is prepared. If you happen to be in Zamboanga city, the best bet would be Alavar's. I think they also have a branch here in Manila but I haven't tried them out.

The Alavar sauce goes very well with ANY crab. :) I'd prefer the Alimango, the Alimasag, even the lowly Talangka over the Curacha any day. (They don't seem to favor the Talangka in Zamboanga, so I get them there cheap. I once went to the wet market and an old local lady asked what I just got, referring to the talangka I had just bought)

I guess the only reason they're a specialty in Western Mindanao is because this is where they're often found, and not necessarily because of their great taste.

PS
The female curachas don't carry their spawn (alige). How sad is that?

coco sugar, been to Zamboanga if you happed to browse my old posts. sampled the curacha but not at alavars where a friend also requested for ginataang bagoong alamang there.

mary, the old LCP tiangge is now at Eton Centris Walk, EDSA corner Quezon Avenue, called Sidcor Weekend Market. There's also a new Sunday market at the Lung Center but I haven't been there to see

I heard that most of the sellers in LCP are also in the Centris market, pero ibang araw yata. Tama ba? Or meron pa rin ng Sunday?

Anyway, thanks for the reply!