Best Surfing Beaches in the Philippines

For those looking for extra adrenaline rush and muscle-flexing beyond the usual beach bumming, there are many known and unknown places in the Philippines where waves can be found that surfers, both local and foreign, will find challenging. Herewith is a list of surfing spots, both for newbies and surfers looking for "killer waves," gathered from various sources including various travel shows on TV.

Best Surfing Beaches in the Philippines:

Aurora: Baler's Sabang and Cemento Beach
If the ending scene of Francis Ford Copola's movie "Apocalypse Now" was shot in Pagsanjan Falls, Baler's beach was the location shoot of the surfing scene. To get there, board a Manila to Baler bus of Genesis Transport bus (terminal on EDSA, Pasay City) or a flight to Baler via SeAir.

Camarines Norte: Bagasbas Beach in Daet,
A surfing beach in the Bicol Region ideal for surfing lessons with fine black sand. It can be reached by buses going to Daet (Amihan, Philtranco and Superlines) followed by a short tricycle ride to the beach facing the vast Pacific Ocean. 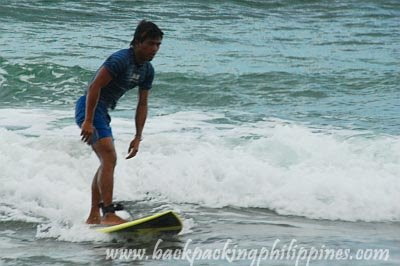 Surfer on a surfboard on Bagasbas Beach

Catanduanes: Puraran Beach, Baras
Known in the international surfing circuit as "Majestic," with its awesome long-barrel waves made spectacular by visiting typhoons

Eastern Samar: Calicoan Island, Guiuan,
The home of The Surf Camp with ABCD Beach has both left-hand and right-hand waves. Surfing season runs from April to November

Eastern Samar: Macate Island and San Vicente, Sulat town
An "off the beaten track" surfing destination without the surfing tourist crowd in the town of Sulat, Eastern Samar is Macate Island (and San Vicente) where about eight feet high waves welcoming surfers can on a deserted beach. To get to Sulat, book a flight to Tacloban City, from Tacloban Airport, get on the San Jose jeep to Duptours terminal or Tacloban Bus Terminal, followed by a van ride to Borongan (via Duptours with regular trips to Borongan via plus another jeepney to Sulat) or bus to Borongan to take you to straight to Sulat, Eastern Samar.

Ilocos Norte: Maira-Ira Beach, Pagudpud
In an secret area in Pagudpud known as Blue Lagoon. It can be reached by boat from Pagudpud's Saud Beach

La Union: San Juan
Perfect place for longboarders. It can be reached by any bus to Ilocos (Vigan, Laoag, Pagudpud) and drop off near the San Fernando-San Juan boundary.

Surigao del Norte: Siargao Island
Known as "The Surfing Capital of the Philippines" with the world-famous Cloud 9 waves of General Luna town facing the Pacific Ocean. Cloud Nine was named after a chocolate bar that surfers kept in their shorts. The surfing beach offers a powerful hollow right hander hailed as one of the ten best waves in the world comparable to the renowned surf of Hawaii and Indonesia. Besides Clud Nine, there's Jacking Horse, Tuason Left, Rock Island, Stimpies and Pacifico. Best time for surfing in Siargao is from August up to the start of November due to the presence of typhoon swells and winds. Waves are smaller from May to July while December to April the winds are strong with pretty big swell preferred by some surfers.

Zambales: San Narciso and Pundaquit, San Antonio
Good for newbie surfers, the beaches of Brgy Pundaquit in San Antonio and of San Narciso beckons Metro Manilans due to its proximity.

Skimboarding in the Phlippines:

Skimboarding (or skimming), another water sport gaining popularity is some areas is a boardsport in which a skimboard (a sort of little surfboard) is used to ride on an incoming wave.

Note that the places listed above are also ideal for skimboarding where the towns of Tanauan and Dulag in Leyte is gaining popularity.

Want to learn how to surf without heading for the beach?

I've never tried my hand at surfing, but then we don't really have the waves here. We do have board sailing, I tried that once, but I couldn't really keep my balance very well.

Siargao island really deserves its name as the "Surfing Capital of the Philippines". Its huge, powerful rollers have been ranked among the top five breaks in the world.