Flights to Baguio from Manila?

Thinking of ditching the more than 6 hour bus ride and instead fly to Baguio? Problem is there are no longer regular flights to Baguio as discussed on various blogs and websites. Asian Spirit, now called ZestAir, the only airline servicing the Manila to Baguio flight route, stopped the service due to many reasons: commercial, reliability and safety.

Most people from Metro Manila prefer the 6 to 7 hour bus ride or bring their own vehicle to visit the City of Pines high up the mountain. Baguio's Airport, called Loakan Airport, suffers from mountain weather problem i.e. flights get canceled easily when fog covers the airport which is a common occurrence. This is very unacceptable for businessmen who have no time to endure the long bus ride to Baguio.

Camp John Hay, located on Loakan Road, lies on the flight path of airplanes going to Baguio that's why Tutubi was able to get a hurried, silhouette-like (since he found no time to adjust his camera settings), shot of the airplane against the gray, cloudy sky of Baguio. 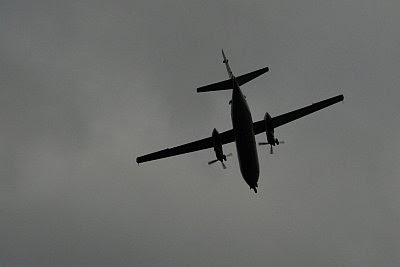 People may, however, get chartered flights to Baguio though not cheap. From Baguio Airport to the city it's easy for there are taxis waiting at the exit gate of Loakan Airport.

The nearest airport to Baguio as an alternative to Loakan airport is the newly-upgraded San Fernando Airport in La Union province but still, no commercial flights from Manila, Cebu or Davao fly to La Union airport. Asian Spirit, now ZestAir, used to fly from Manila to San Fernando but ceased offering prior to the airport upgrade. Philippine Airlines signified intentions last year to service the route but commercial operation is still not present (Tutubi tried a mock flight booking but found no flights to La Union). No news still for Cebu Pacific Airlines, SeAir or other airlines. Once flights to San Fernando Airport are offered commercially, you book flights to San Fernando then ride a bus to Baguio City. This option is best for those coming from Visayas and Mindanao. For now, only chartered flights from private companies use the airport.

Will post updated information on this in the future...

ohhh, zestair was asian spirit before.... i didnt know that. hehehe i was reading through other travel forums and they were asking for feedback on zestair.. i havent heard about it, so i just recommended cebupac and pal. hehehe still, i havent tried asian spirit then.

reeyuh, yep, Asian Spirit was bought by the owners of Zesto and renamed it ZestAir :P