Going to Baguio City with your own vehicle? Here's an updated route guide for you to get to Baguio the fastest and safest way via the Subic-Clark-Tarlac Expressway or SCTEx for short.

Driving Directions to Baguio via SCTEx:

From EDSA going to Monumento, turn right towards NLEX, drive towards the end of the modern tollway, take Dau exit toll gate and follow the SCTEx spur, pay the toll fees. Turn right on seeing direction signs to Tarlac City. On reaching the end of the expressway, turn left then right on MacArthur Highway. 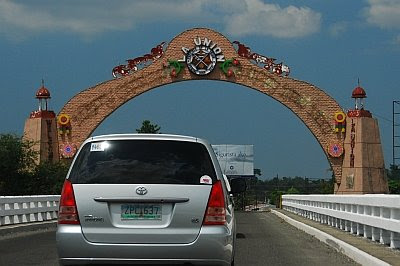 The welcome arch of the Province of La Union

On seeing a police station and a cockfight arena/coliseum in Rosario, you'll be facing a dilema whether to choose to turn right to get to Baguio via Kennon Road which is about 40 minutes from Kennon Road Toll Gate. If you choose left, you may take Marcos Highway to Baguio via Pugo (or the older entry point via Agoo) or drive all the way to La Union, and Ilocos (Vigan, Laoag, Pagudpud).

Which is better: Kennon Road or Marcos Highway?

If you're vehicle has a small engine displacement hence less power, take Kennon road due to less incline than Marcos Highway but not during the rainy season when Kennon Road is more prone to landslides and thus unreliable and dangerous. Marcos Highway, now called Aspiras Highway, is more reliable, lesser sharp turns and though longer than Kennon, takes almost the same time to reach Baguio City. Buses going to Baguio take Marcos Highway.

Kennon road is recommended if you're heading to Camp John Hay, Baguio Country Club and Mines View which is on the eastern side of Baguio for you will be able to avoid heavy traffic in The City of Pine's downtown area.

Kennon Road has the Lion's Head while Marcos Highway has the busted bust of former president Ferdinand Marcos. You'll encounter fog on both these highways in the afternoon. 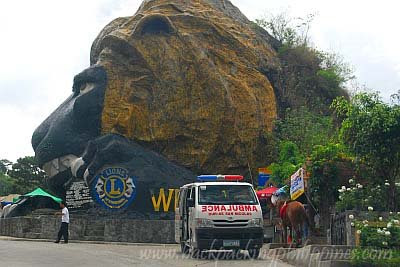 Giant Lion's head on Kennon Road, the first time Tutubi saw it for he always pass by Marcos Highway

Travel tip: Drop by Shell Select Station in Rosario, La Union for the road traffic advisory of Kennon Road, Marcos Highway, Naguilian roads. A short stop at the gasoline station can save you hours of frustration if you got stuck in traffic.

Alternate route to Baguio (longer but faster during the day or avoid heavy traffic in Tarlac City and Hacienda Luisita), on exit from SCTEx, turn right to the road going to Gapan-Cabanatuan and turn left when you see direction signs of alternate route to Baguio via Victoria town. At the end of the road, turn right where you'll see Victoria town plaza then left again immediately to the first road (there are signs so you won't get lost pointing to the alternate route to Baguio via Pura, Ramos and Paniqui). At the end of the road turn left to follow the route via Gerona (another route is via Guimba if you turned right). You will then turn right on MacArthur Highway (landmark: Petron Gas Station at the corner) effectively bypassing traffic in Tarlac City, even Isdaan Floating Restaurant in Gerona, the home to Taksiyapo). This route is just an hour from NLEX Dau exit and recommended during the day when traffic is heavy in Tarlac City. From there, follow directions stated above up to La Union and the choice of either Kennon Road or Marcos Highway.

From Baguio to other destinations

Baguio to Pagudpud can be reached via Naguilian road and Bauang, La Union.

Baguio to Sagada-Bontoc-Banaue route is via La trinidad Road and Halsema Highway which is about 6 hours away.

Note: future updates of this post will include waypoints/tracks for GPS users

baguio city to dagupan driving directions pls.. i need a detailed one. town per town. thanks a lot!