Slumdog Millionaire: A Tour of India's Taj Mahal and Mumbai

Who wants to be a Millionaire? Such is the the title of the popular TV game where the Oscar-award winning movie Slumdog Millinaire's plot revolved around.

Slumdog millionaire is about the story of Jamal Malik's rise to fame winning the largest prize of Who wants to be a Millionaire, his brother Salim and Jamal's childhood sweetheart, Latika. He was able to give the right answers to all the questions because of his memories associated with events in his life as a slumdog.

What got the curiosity of Tutubi for a long time about the movie was that it was shot in places he himself was able to visit during his three week stay in Mumbai, the present name of the city of Bombay.

The movie started in the slums of Mumbai, located only a few meters from modern skyscrapers offering a bleak contrast to the wealth of the place, India's economic center. There they became orphans with the killing of their mother by people hunting Muslims, turned into street beggars by a crimelord named Maman who they narrowly-escaped when he tried to blind Jamal (blind singers earn double working as beggars on the streets)

Street-smart brothers were able to hitch a ride on a train that took them to heaven...err...the world famous Taj Mahal in Agra (a place Tutubi wanted to visit then but didn't get there due to sheer distance from Mumbai if he traveled by train or dampened by the prohibitive cost of airfare) where they learned much money working as tourist guides.

The sight of the Dhobi Ghat, the largest in Uttar Pradesh, (There is a street and MRT station named Dhobi Ghaut in Singapore) is an awesome sight, made up of open wash tubs for washing clothes and linens, unique to India.

Just after killing the gangster Maman, the brothers plus Latika checked in at Tulip Star hotel; again a "memorable" one since it's the hotel where Tutubi stayed on his first day in Mumbai, but later transferred to the better Taj Lands End Hotel, a sister-hotel of Taj Mahal Hotel that gained world-wide attention during the recent Mumbai terrorist attacks.

The tryst place of Jamal and Latika turned out to be the UNESCO-listed Victoria Terminus, a grand train station sporting a Victorian architecture that Tutubi also was able to visit. 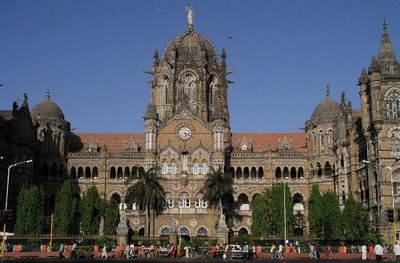 Of course, Tutubi won't narrate how the story ended including the climax (and thus Slumdog Millionaire's synopsis for your reaction paper if you're looking for one) to avoid being a total spoiler. He can only reveal it ended on a Bollywood note: dancing and singing with quirky movements of Indian traditional dance, beat and rhythm.

All in all, the plot, direction and actors/actresses were really outstanding even the child actors. A recommended for everybody for entertainment and for those wishing for a free tour or India from Mumbai to Taj Mahal in Agra.

Note:
to read more about Tutubi's Incredible India escapade, please click on the India link below the header

i loved this movie! totally oscar-worthy!

you're so lucky to have been to those places in india! must be an extra-special experience to watch that movie for you.

fortuitous faery, yeah brought back memories of the place...the beggars and street children that will put manila's own street children to shame...also remembered the peaceful Mumbai back then against the recent mumbai under siege by terrorists... i've been to the places attacked by the terrorists too

have not seen the movie yet, but will definitely put in on my netflix queue. how are you?

Nice to hear that you have visited India. I would like to go sometime and see its famous landmarks, esp Kashmir :)

nice movie i love it especially music is good

OMG!!! i regret not watching this in the cinemas while it was out. i suck. haha.

I watch this movie and it is nice. I consider this movie a truly world class. I hope that Philippines can do the same

watched the movie...i liked it!

I'm still giddy myself from sensory overload after my trip to India. What's most memorable in Agra was celebrating the Holi Festival and viewing the Taj Mahal during a full moon!