Probably the most luxurious hotel in the City of Pines, The Manor at Camp John Hay high up in Baguio City was the home of Tutubi for 4D/3N but mostly spent attending a recent convention leaving no time for him to explore more of Baguio's other charming attractions.

Tutubi left Manila around 8am and passed by NLEX, SCTEx then the winding snake-like Kennon road to reach Baguio in less than 5 hours where the cozy room of The Manor welcomed him. 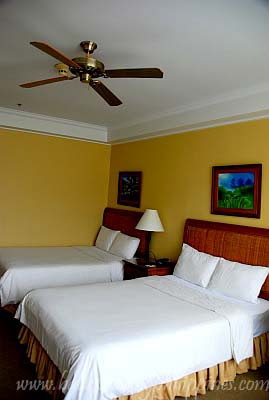 the cozy, inviting room where Tutubi slept for three nights all by for himself 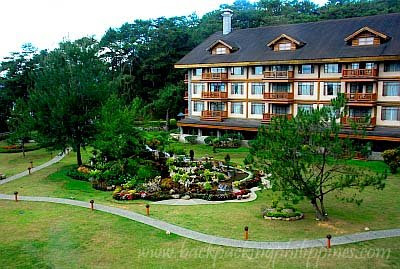 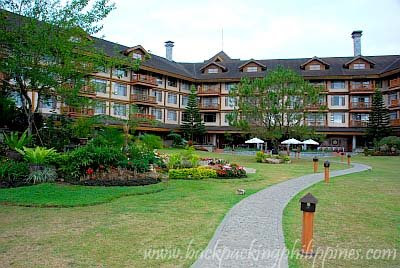 down in the garden with the veranda in view 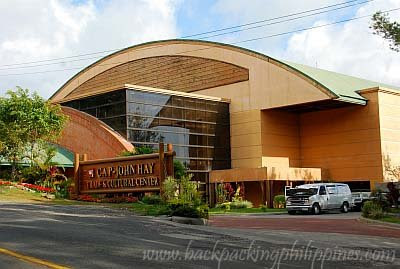 Rooms: very cozy with a good view. Tutubi requested for a garden view that's why he has that view of the place. There's no bathtub, something Tutubi looks forward to in a plush hotel where he loves to spend time on.

Food was ok, though not really outstanding except the salads with very fresh greens with vinaigrette with a a little sweet hint that Tutubi loved. Fresh strawberries, in season, were also served but quickly emptied from their trays.

Service was fast with staff courteous. One very helpful lady was Des, the convention manager, for her accommodating kindness but Tutubi found out she resigned and due to transfer to hotel near NAIA Terminal 3.

Other facilities inside Camp John Hay include a junior golf course (if you want a full golf course, there's Baguio Country Club nearby), the Camp John Hay Historic Core with the Cemetery of Negativism, Bell Amphitheater, Bell House, Art Park, Mini Camp John Hay, and a Butterfly Sanctuary (entrance fee of PhP40.00 but stupid opening time of 10am when most butterflies are getting ready to sleep)

Tip: If you're looking for cheap package and discounts, book at The Manor during the lean months of July to September for 40% discount on published rates.

How to get to Camp John Hay:

Commuting to Camp John Hay is easy with jeepneys going to Mines View Park pass by the gate but requires some walking to get to the hotel. The best way still is to flag a taxi in Baguio city center. It's mostly accessible from Kennon Road then turn right on Loakan Road.

hm! cemetery of negativism? been to camp john hay many times but i haven't heard of that. interesting, will look that up next time i go there. :D

That's a pretty decent place with looking clean and spacious rooms :) Tks for the tip. I could use this in future. FYI, my wife has never been to Baguio ever !

carlotta, i'm going to post something about the lost cemetery soon..stay tuned

anonymous, it's export industry and BPO suffering but not too many layoffs here. probably in the future.

Sounds like a perfect place to stay! I'll let you know when I want to visit :-)

it's got a niiiiice exterior and everything looks clean! lucky guy: you had 2 beds all to yourself. :D

this is my fave hotel when in the city. though it's costly, it's very peaceful and cozy at night. i love going to the nearby starbucks to spend a couple of hours or so late at night :)

I've always wanted a vacation in Baguio; I still do. That's the first thing in my agenda if and when I go for a visit.

Looks like "Des" left a very strong impression on you ! ;-)