To the average city dweller living in the north of the metro, camachile is just a place in Caloocan City with a flyover connecting traffic-prone Quirino Avenue (going to Baesa, Quezon City and Novaliches) with North Diverson road to NLEX with an Iglesia ni Cristo kapilya as landmark for commuters.

To people who grew up in the provinces, it's a tree and fruit that conjures images of ones youth, similar to memories of the aratilis of one's childhood.

Camachile (scientific name: Pithecellobium Dulce), like the aratilis, is not native to the Philippines. It's brought in from Mexico, where it's known as guamachil, by the Spaniards, spread to other neighboring Asian countries as far as India where it's called Manila tamarind. It's fruit is about one centimeter wide and several several centimeters long. The fruit is eaten by some people and taste a little sweet and sour, to some it may produce a pucker face though. 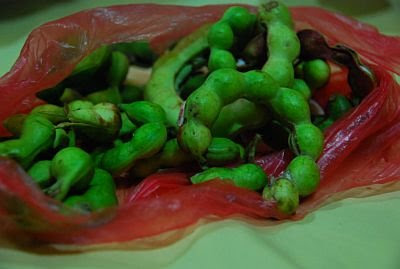 camachile fruits bought by Tutubi on MacArthur highway in Pangasinan for PhP20.00

When an officemate of Tutubi, a fifty-something man who grew up in the town of Sexmoan (the former name of Sasmuan, Pampanga), saw his camachile, he narrated a game he used to play where his childhood friends will get camachile seeds and try to peel off the seed cover without exposing the white pulp otherwise he'd lose the game. This game, however, is foreign to Tutubi since he has no childhood memories of the trees unlike the aratilis, lanzones, santol, mami (scientific name: calucarpum sapota), kaimito, guavas, and, of course, mangoes.

Lastly, is Camachile, Caloocan City named after the camachile fruit? Was the area planted with camachile trees that's why it's called that way? Will somebody please confirm history of camachile?

Some years ago, I went down south of the California border to San Felipe, Mexico. To my surprise, I found a camachile tree there. The Philippines has similar climate as Mexico, so camachile could thrive well there.

I never knew there's a Camachile town back home.

Hey I know the camachile game - however, our version is, if you get to peel it without exposing the white seed, then you get to make a wish and it will come true :D

Yup it does remind me of my summer holidays in Pangasinan ... ah.. those were the days of innocent childhood...

I will answer this question. Back then my elementary days, I asked my mom why Camachile is called Camachile, as history says, there is indeed a camachile tree that stands infront of the Iglesia ni Cristo chapel in those days. About 1988-1994

Before the area was closed by the NLEX segment, it used to be the last point of disembarkation before entering the expressway. Today, last point is Balintawak. There used to have a bus stop infront of the Camachile tree. It is as busy as Balintawak of today