As you know, Tutubi's stuck in Metro manila for the Holy Week for a change. This is his first time to spend Holy Week in Manila and just the third time he'll miss Holy Week in Paete, Laguna, his hometown.

1. Visita Iglesia in Manila: Visit seven churches according to traditional bisita iglesia itineraries. Here you can see many people walking to churches some barefoot, avoiding riding public transportation, as a form of penitence. (for sure the LRT and MRT trains will stop operating during Holy Thursday, Good Friday, Black Saturday and Easter Sunday and the Pasig River Ferry may also do the same due to lack of people so you're stuck with buses, jeepneys and taxis) 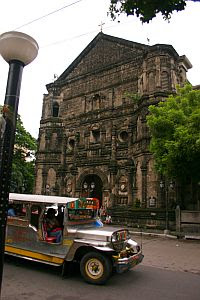 2. See fishes and other marine animals at Manila Ocean Park, open throughout the Holy Week from 9am to 9pm.

3. Complete the 14 Stations of the Cross at Nayong Pilipino in Pasay City (it's been ages singe Tutubi visited the place). Starting April 6 (Holy Monday) up to April 12 (Easter Sunday) from 7:00 a.m. to 7:00 p.m., Nayong Pilipino will be opened to the public. The same is true for Nayong Pilipino Clark.

6. Cool down at Wawa Dam, something refreshing and cheap too, in Montalban, Rizal, just an hour from Tutubi's home. Nearby resorts in Antipolo and other Rizal towns are good too.

7. Visit SM and other open malls on Black Saturday and Easter Sunday for those availing of free air-conditioning to escape the searing summer sun...nagpapalamig lang :P

8. Staycation: stay at home vacation - cheap and comfortable with the air-con at full blast.

Do drop by later which of these activities Tutubi did for Holy Week 2009. One thing's for sure, he won't visit the malls for he's not a mall-rat unlike most Filipinos :P

so, this your first time to spend holy week in manila? for sure you'll enjoy the non-traffic then! yey! ;) driving around metro manila on holy week is like heaven. heheh.

as for me i plan to do number 4 sometime this holy week. been too long since i've visited the old manila area. =)

hey, you might want to try completing the 14 stations at Balai Taal.

Hi Kuya, your blog is one of the best! Keep it up!

Thanks for the heads up! Haven't walked down Nayong Pilipino in a while, this opportunity is not to be missed.

i work in a profession that requires me to come in to work all day of the year, including holy week, so i've been spending holy weeks in the metro for the past couple of years. it could get a bit boring, with nearly all business establishments closed, but the major upside is the fact that metro manila is beyond decongested, with virtually no traffic whatsoever. even chaotic commonwealth avenue is almost like a ghost town. see, its just holy wednesday and already the silence of the city becomes ever more palpable.

kudos to you and this site!and thanks for the tips and activities you gave on this posting. i needed these as i am not going out of town too. i might do the visita iglesia with my kids and family. or maybe just alone. but then again, i am just excited about going downtown manila sans its usual "sceneries."

marco, thanks for the "award" :P

bambit, i drove around manila moments ago but got as far as malate...probably tomorrow ;P

yase1222, good luck on your trip around the metro :P