The Next Boracay on Jessica Soho's Summer Special

Last week Tutubi saw a teaser on TV about an adventure attraction in Cebu that he intends do in his upcoming trip to Cebu (for the nth time). But due to his channel surfing ways, he forgot about it almost missed the entire episode of Kapuso Mo Jessica Soho's Summer Special.

The first segment featured some destinations tagged as alternative summer destinations to Bora, or groomed to be the next big thing as Bora-- very fine white sand beach, resorts and accommodations for every budget and an island of party animals.


If you weren't able to watch the KMJS April 4 episode, here's the summary of suggested destinations plus Tutubi's reviews and comments of the places mentioned-- because he's been to all of them-- and why he disagrees with the suggestion that the places won't be and can't be the next Bora
1. Anawangin Cove

A boat ride ride away from Barangay Pundaquit in San Antonio, Zambales (Also the gateway to Capones Lighthouse) is really picture-perfect place with a cove of fine white sand beach complimented with a backdrop of pine trees (actually agoho trees (Casuarina equisetifolia)), common to Zambales beaches) making the place a fusion of Bora and Baguio combined. It's a backpacker place, much like Bora decades ago, a favorite of trekkers who trek to the place and camp out.

Perfect, but, beware of a lurking danger in Anawangin with the presence of untertows/undercurrents making the beach not suitable for children and family vacations besides the place lacking facilities for such. Tutubi suggest staying at a Pundaquit beach resort (the best one seems to be
Punta de Uian though pricey), just hire a boat to get there and don't forget your life vests!


An exclusive members-only resort development in Pagbilao, Quezon was also visited by Tutubi recently when he saw the resort with people frolicking and riding the jet ski from Silangang Nayon Park & Restaurant. After he left Silangang Nayon, he proceeded to visit the place before going back to Lucena City. 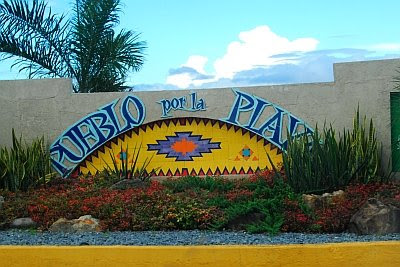 Tutubi's Note: Pueblo Por La Playa has nice multi-colored houses and family-friendly facilities but the beach, again the beach, doesn't compare with Bora's if you're going to tag it as the next one. Tutubi wanted to explore the nearby Pagbilao Grande Island's beaches said to be very good but it will take time. To be able to enter the place, there's a membership fee of PhP300,000.00, plus the annual dues of course, making the place out of reach of ordinary mortals in the Philippines. Tutubi also loves to visit other places rather than to spend vacations regularly in just one place.

A beach resort on a long stretch of fine white sand beach in Nasugbu, Batangas. It shares the beach with the exclusive Terrazas de Punta Fuego, beach resort partnered with Club Punta Fuego (they're different but within a few minutes driving distance from each other). The beach front can only accommodate a few more resorts and so the infestation of beach resorts there won't happen unlike in Bora's four kilometer long stretch. 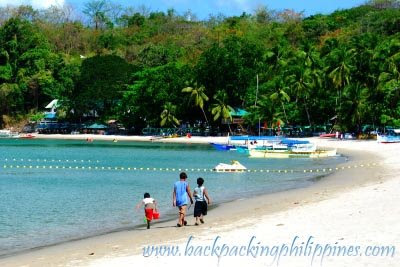 An island group part of Vinzons town of Camarines Norte in Bicol Region. It's about 3 hours by boat from Vinzon's port, Mercedes or even Bagasbas Beach in Daet and about an hour away from Apuao Grande Island. (Note the header, as of posting time, of this blog was taken on Calaguas Island in May 2008) 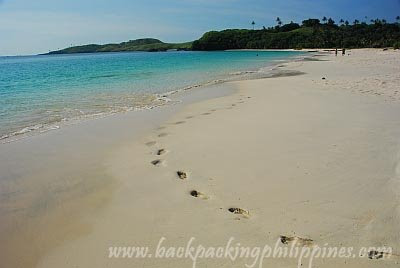 Feedback: The pristine long stretch of super fine white sand beach also perfect for swimming on Calaguas Island's Mahabang Buhangin has what it takes to make Boracay a run for its money. The sand is so fine, as fine as those in Bora, if not finer. It doesn't also feel hot on your feet probably due to its unique chemical composition similar to Boracay's white sand. It doesn't have the notorious green moss that litter Boracay's shoreline on summer mornings.

Calaguas Island as the next Boracay? Tutubi doesn't think so. It's too far from civilization making it fit for adventurous backpackers, the same mold of backpackers who leaked photos of Boracay to the world decades ago that started its ascension to its current place in Philippine tourism, when backpackers were displaced by the usual tourists and turned the paradise into a party-place if not of sex, drugs and booze. Calaguas Island is also not a place for all seasons, Tutubi doesn't recommend going there during the typhoon season lest you get stranded by big waves. He wants to return to the island again someday to find it like it was before: a communion with nature, sand, sun, stars at night, without the trappings of modern civilization for there's no electricity on the island.

Boracay is Boracay, it has a different persona than the places mentioned, and there's absolutely no other place that can rival it at this time for being the place to be seen (even during Holy Week), but that doesn't mean there are no better alternatives to it. It only depends on your own taste and preferences.

Jessica Soho's episode researchers fell short of Bora's salacious charms if KMJS is really serious about the places, including two resorts, in tagging them as "The Next Bora."

About Melvic Brinas, the guy from Daet Tourism officer as contact person for Calaguas Group of Islands, all he can say about him for you readers are these two words: Caveat Emptor!

Please visit the links on this page for the contact numbers, reviews, driving directions and other details

Ooooh I miss the beaches. Only last weekend, my trekking buddies went to Anawangin. It was one of the few places we were planning to go to last year but time ran out. Boracay also holds a special place in my heart because we used to go there every other year for summer break. I usually end up comparing the other beaches we go to with Bora, but I think that this is something that can be deconstructive because we might be trapped into expecting something it's not, when we can simply enjoy a place for what it is.

watson, yeah, people should stop complaining and comparing so as not to be disappointed. Boracay is a nice place if you ask party people, a group in which I don't belong. I was only there last year and don't intend to come back soon...will spend my money exploring other places :P

I remember reading from my friend Jasper's travel blog (http://thebackpackboy.com/) that they were able to stay at Pueblo por la Playa for one night. Lucky them!

From what I've heard from friends & bloggers and seen on photos, Boracay is difficult to beat. At least in some terms. I still have to explore Boracay. One day.... I only hope it hasn't gone totally "destroyed" by then.

Indeed these beaches are potential and already they are world-class destination. I remember that the Bantayan Beach in Cebu is such a pristine sight, parang Bora na konti.

There are a lot of beaches being developed for tourists and I haven't even gone to one of them. I really need to visit home...soon.

Thanks for all the tips.

"Boracay is Boracay, it has a different persona than the places mentioned, and there's absolutely no other place that can rival it at this time for being the place to be seen (even during Holy Week), but that doesn't mean there are no better alternatives to it.">>> i agree. closest to being a busy beach maybe is marinduque but it's sand cant match that of boracay. bantayan island in the other hand is a busy beach but only long holidays like christmas and holy week. sands can match that of boracay.

These are such tempting shots.
'Wish I could be there!' type of shots.
Interesting and informative write up too.

hi..i am really interested to go to calaguas but i have to budget my money because i am still student...i hope u can help...do u know how much i can hire the fishing boat?its a two ride right?and where can i stay in calaguas...thank u

anonymous, read my post on calaguas island, link above, for more info. it's better for you to book a calaguas island tour offered by various tour operators.

Explore and Have Your Magalawa Island, Zambales Experience. Your perfect getaway this summer.

just some correction.. boracay is boracay. bora is different from boracay so please refrain using bora when you mean boracay. thanks