Days before Tutubi's "historic" trip to the "Land Down Under," he was asked by his excited officemate who's going with him what they're going to do in Sydney to which he simply replied: "Let's cross the bridge when we get there."

And on landing in Sydney Airport one chilly Sydney winter morning, hurriedly dropped their bags at the Metro Hotel on Pitt, walked towards Circular Quay and historic The Rocks district of Sydney near Sydney Opera House and crossed the iconic Sydney Harbour Bridge 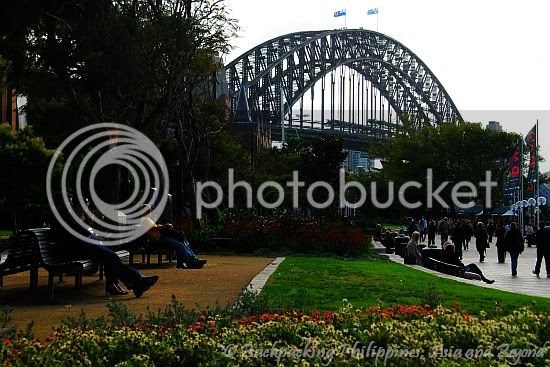 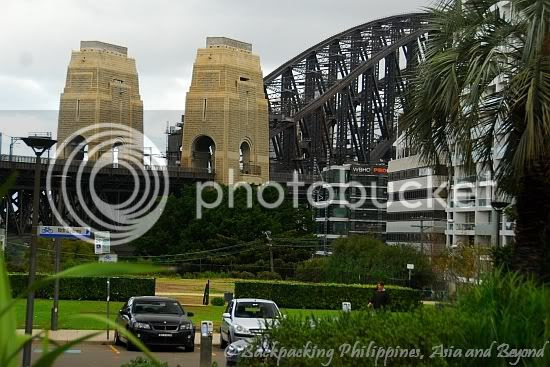 Want to know the way to Cross Sydney Harbour Bridge?

From Circular Quay, you need to walk towards Museum of Contemporary Art, continue towards Argyle St then turn left just before entering Argyle cut (looks like a tunnel) then right up a flight of stairs, cross the street where you'll see the entrance to the pedestrian walkway of the bridge that leads to the other side. Tutubi got there by finding the way as he didn't find the signs leading to the stairs but at least he found it.

If you're quite adventurous and with money to burn, you can also do the more daring BridgeClimb where you can climb the bridge for a fee of course. A lesser adventure by climbing one of the pylons where a view is offered plus a museum (entrace fee/admission price apply) about Sydney Harbour Bridge's history can be viewed. Tutubi opted for the free tour of Sydney Harbour Bridge just by walking across it.

warning: Don't believe online travel guides that crossing the bridge takes only fifteen minutes; Tutubi took about an hour just to cross to the other side-- delayed by taking too many pictures of Circular Quay, Sydney Opera House, Fort Denison and the bridge itself.

Sydney harbour Bridge is listed as one of the "1000 Places Before You Die" book by Patricia Schultz. It has a pedestrian walkway on the eastern lane, a bike lane to the west, a train track and several lanes for vehicles.

This is the start of a new series on Beyond Asia detailing Tutubi's first adventure outside of Asia. Will go back to regular programming later

Labels: 1000 Places To See Before You Die, Australia, Beyond Asia, Sydney

Oh that is one of the things on my wish list (bucket list if you must know). How was the weather?

photo cache, i also have a bucket list--- a very large bucket. weather's fine about 19 degrees, cloudy with slight drizzle for the first five days. didn't have blue skies. but got perfect weather on my last two days but wasn't able to revisit sydney harbour for better pics :(

nomadic pinoy, i pass by New York everyday and i've yet to see that bridge...new york cubao is it. i pass byt everyday San Francisco too...i sometimes see the bridge in Frisco QC :P

very nice shots :) I've never been to Oz before. Looks like it is fall/winter there these days ;)

bw, it's already winter there but there's no snow :P

lovely pics.. i am not sure if i still have the time to go to sydney. naks! ang sarap mangarap ha ha

bing, libre mangarap...ako rin nangarap at nakarating. it's my company who paid for it...been there on a training hehe

Natuloy ka na! :D Haaay, I miss Sydney after looking at your photos. Btw, there's a mini-version of the bridge sa Quiapo ;)