After a night of sound sleep at Legazpi Airport Hotel, Tutubi checked out early to catch his morning flight to Manila.

It was raining hard that morning and with no umbrella on hand, Tutubi requested the security guard of Legazpi Airport Hotel to walk them off to the departure area of the airport about 50 meters away.

After passing through the airport security checks and checking in at the Cebu Pacific flight, an announcement was blurted out at the PA system declaring Tutubi's Legazpi to Manila flight was delayed due to near zero visibility caused by heavy rain. 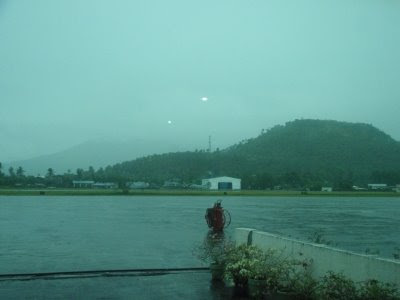 About 2 hours of delay after the should've been ETD, the flight was declared canceled and all passengers were requested to re-check in again for a new plane from Manila to fetch them. No mention of Cebu Pacific fare refund was made. 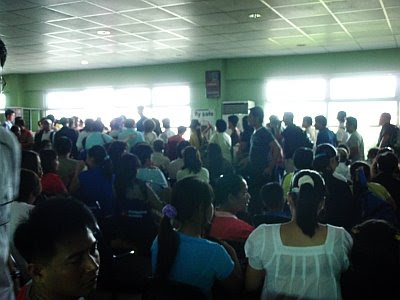 A long queue then formed so fast at the Cebu Pacific counter for re-booking as a chance passenger of the later flight or the promised special flight. 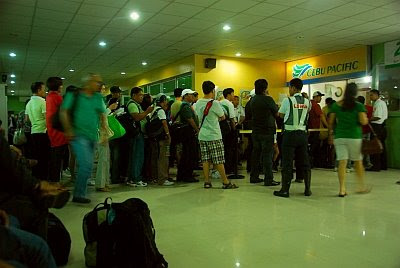 the long queue at the Cebu Pacific counter (Nikon D80)

Tutubi and his companion were able to book at the new special flight at no extra charge since they're not on promo fares. His new ride arrived around 2pm, 6 hours delayed and touched down 3pm at NAIA Terminal 3.

Due to the rains, there's the usual long queue of people waiting for taxis-- metered "yellow cab" and regular-- at the airport terminal so instead of waiting for hours to board a taxi, he hopped on to the NAIA shuttle going to Baclaran, EDSA, MRT, LRT for P20 fare, transferred to the MRT up to North Avenue Station where he got a taxi that took him home.

Tutubi, in all of his travels, experienced just his second flight cancellation experience, the first was with PAL a few years ago, while his delayed flight score is just two-- the first with Air Philippines and the second with Philippine Airlines.

And you still joke around that airlines in the Philippines are always late?

Lastly, Tutubi thinks his flight cancellation was for the better since he's safe rather than risk flying in turbulent weather.


Notes:
Cebu Pacific gives away your preferred seating you chose during online booking if you checked in less than 45 minutes of ETD. Tutubi found this out the hard due to his slow moving companion who thinks they're just walking distance of the airport and decided to tarry.

"9.2 Cancellations and Change of Schedule
At any time after a booking has been made we may change our schedules and/ or cancel, terminate, divert, postpone, reschedule or delay any flight where we reasonably consider this to be justified by circumstances beyond our control or for reasons of safety or security.

In the event of such flight cancellation, we shall at our option, either:

a) rebook you on the next available flight without additional charge; or

b) offer to refund your Ticket"

Yep! Better to be safe than sorry!

thanks for sharing the photos.

chris, just prolonged my stay at the airport. btw, are you the admin of awesome philippines? :P

I think you were bringing both Olympus 1050SW and Nikon D80 on this trip :D

I'd been to Albay Parks and Wildlife once where Lignon Hills can be seen. I'm planning to climb Lignon Hills with my bike probably on next year's holy week.

A lot of people are getting upset to airlines when their flight is canceled due to poor weather condition. But as for me, I'd even be more thankful of it. As they say, it's better safe than sorry...