People living in Quezon City, or those just passing by Metro Manila's largest city's Cubao area, are mostly unaware and indifferent that Cubao used to be the seat of Quezon City government after the city was formed in 1939 by then president Manuel L. Quezon. It was at the northeastern corner of EDSA and Aurora Boulevard where the fledgling city rented a hospital made of wood.

The first mayor then of the city was Tomas Morato, from whom the street filled with restaurants was named after.

Picture of the original Quezon City Hall (from the official website of Quezon City). As posted on QC website, it's at the northeastern corner of EDSA and Aurora Boulevard which is now a vacant lot owned by National Bookstore

The blueprint of the city was master planned by Arch. Juan Arellano, later a National Artist for Architecture, with the four avenues (North, East, West and Timog) (strange, isn't it?) forming a diamond cut into four triangles by EDSA and Quezon Avenue and tipped with the Elliptical Road where the Quezon Memorial Circle stands. 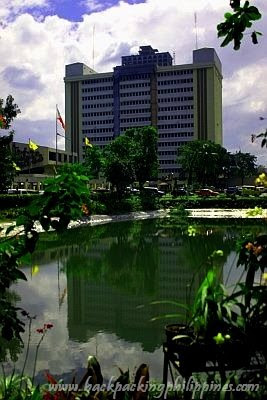 For people applying for business permits, real property taxes (amelyar), birth certificates (as well as marriage, death and other certifications from civil registry), here's information on how to get there.

How to get to Quezon City Hall:

Commuting from Quiapo, Manila, take jeepneys with signboard Fairview or Philcoa and drop off in front of the city hall (on your right) on Elliptical Road (you'll see Quezon Memorial ahead)

Those fortunate enough to have a car, you can get to the City Hall from Makati via northbound EDSA then turn right on East Avenue (take ilalim on reaching Kamuning/Kamias viaduct). You'll see Quezon City Hall on your right immediately after turning right on Elliptical Road (note: there's parking inside the city hall complex)

Hey, that picture with the reflection is just great!

thanks so much for posting this! i took a chance with google on how to get to quezon city hall from manila and came across this. very helpful! :)