The questions most asked by Tutubi to locals of various places he's visited try to uncover a place's native delicacies and specialties, where to find them and how to make them.

This time, he has yet to ask the question to his hosts in Gubat, Sorsogon and yet his question have been answered when they served him two of Gubat's delicacies that turned his ordinary lunch into a Gubat food trip.

First, besides usual dishes known to Tutubi, was a serving a fried small fish, locally called kuyog or cuyog, probably some sort of anchovy, whose taste reminds Tutubi of bangayngay of his childhood in Paete, Laguna. One of his hosts cautioned though that catching the kuyog fish, still small fries, is illegal but people are so fond of the fish they continue to catch them. Fermented kuyog fish is usually paired with cooked pili fruits as side dishes/appetizers/dips. 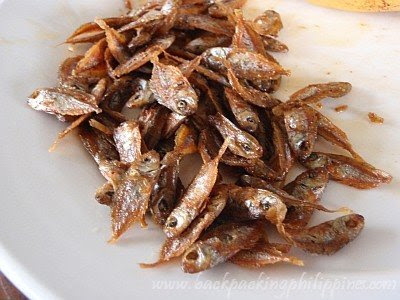 Tutubi's host narrated how the side dish of cooked pili fruit and cuyog is made from boiled ripe pili fruit. The dark skin of the boiled pili fruit is peeled off and the dipped in fermented cuyog sauce, similar to bagoong, accentuated with a dash of calamansi juice. The pungent flavor of the pili combined with the sour and salty kuyog sauce is heavenly to the locals (peninsular Bicolanos and even those from Catanduanes) but is an acquired taste for others. It's very popularly paired with angol fish in coconut milk.

Next was a serving of brown cake made of rice called Hinagum (or hinagom). The rice dessert is also popular in nearby Samar Island, home of the Warays, where the Bicol Peninsula is separated by San Bernandino Strait. Hinagom recipe is simple, it's made from freshly harvested rice that's pounded, roasted in a pan, then pounded again in a mortar mixed with coconut meat and sugar before wrapping in leaves. It tastes quite similar to espasol of Laguna. 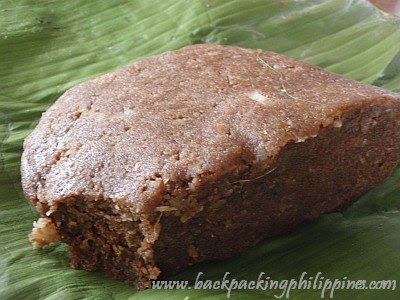 Other Gubat delicacies that can be tried there for a Gubat food trip is binut-ong, a simple recipe of glutinous rice mixed with coconut milk and anise seeds, wrapped in banana leaves and boiled over low fire for about an hour and a half.

The timitim, is some sort of cassava cake made from grated cassava, coconut milk, sugar, vanilla, and pili nuts. The video below, a clip fro m ABS-CBN travel show "Trip na Trip" where they demonstrated how to make the various Gubat, Sorsogon delicacies (shot at Veramaris Resort).

Kinagang, a unique Gubat delicacy made of crayfish. How to make kinagang: remove the shell of the crayfish, mash the meat and mix with strips of coconut meat and leaves of herba buena (a mint variety). Wrap the mixture in higikhik leaves (it's one of the secret of the delicacy or else it will taste differently) then steam.

Too bad, Tutubi wasn't able to taste timitim, binut-ong and kinagang but he hopes to be back in Gubat, Sorsogon someday for this

The worst part about Tutubi's stay in Gubat, Sorsogon was that there's really no restaurant where you can sample their gastronomic treats and culinary treasures except from the home of a Gubatnon. People of Gubat, like most other Filipinos, should really showcase their own native delicacies and unique cuisine as well as develop various tourist attractions to improve tourism in their town.

Most people still think Gubat, is a forest, as the name in Filipino means, but Gubat is actually a progressive town in Sorsogon, now with an ATM of her own by Gubat St. Anthony Cooperative (GSAC), and a lovely Rizal beach that can be developed as a surfing, skimboarding, kitesurfing/kiteboarding, and windsurfing beach if the locals and government officials get their acts together.

Combine culinary treasures with natural attractions and pride of place and you'll have a tourism success story!

Those are delicious looking delicacies!

those names sound as mouth-watering as that fish photo! yuuuum! :)

binut- ong with Milo! yum! am i thinking of the right food?

Hi my father is a Bicolano but I grew up here in Manila. I always wanted to come and visit my relatives in Bicol because I miss the pili and other delicacies of Bicol.

The crispy fried kuyog fish is one of my favorite local delicacy, I like pairing it with tomatoes mixed with soy sauce. With kuyog, I tend to forget my calorie count.