It's an auspicious day for Tutubi. It was raining when he left home but on arriving in Makati, the rain clouds left and let the sun shine on Ayala Avenue.

With the transfer or Cory Aquino's funeral wake from La Salle Greenhills in San Juan to Manila Cathedral to pass by Makati, the expected shower of yellow confetti on the plain-housewife-turned-president who drove away a dictator and re-installed democracy.

It was around 11:30am when Tutubi walked from his office to the "rally" point in order to get a very good vantage point. It's just too bad that he wasn't able to bring his DSLR camera and instead settled for the Olympus Stylus 850SW (a waterproof one, but lacking in optical quality).

Herewith are photos of Cory Aquino's "funeral" on Ayala Avenue, the country's financial center, Tita Cory's last passage on the avenue where the monument of his husband is located.

The crowd of Makati: the last time they converged here was in 2001 that ushered in the reign of now President Gloria Macapagal Arroyo. The president, aided by bootlickers in the House of Representatives, wanted to amend the 1987 Constitution, which is a legacy of Cory Aquino.

Cory Aquino's hearse stopped in front of Philippine Stock Exchange building when 3 Hail Mary's were prayed and the anthemic "Bayan Ko," was sang with hands in the familiar "L" sign (Laban) of the EDSA People Power Revolution of 1986. 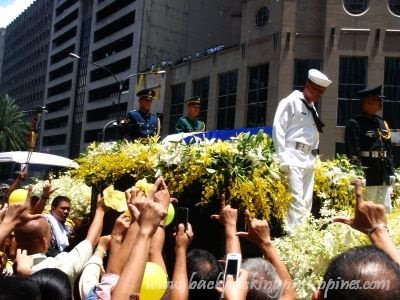 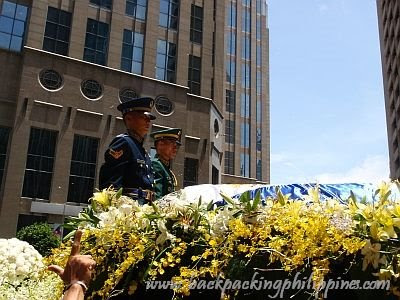 Crowd estimated at around 25,000 people, including foreigners, who came down from the skycrapers and offices before noon and converged at the corner of Ayala Avenue and Paseo De Roxas, where the Ninoy Aquino Monument is located.

The intersection at the center of Makati Central Business District (Makati CBD) is a popular rally site for anti-government demonstrations. 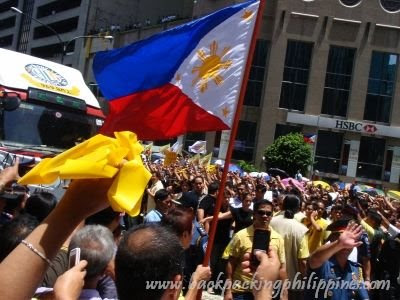 Cory's yellow ribbons in front of the Philippine national flag 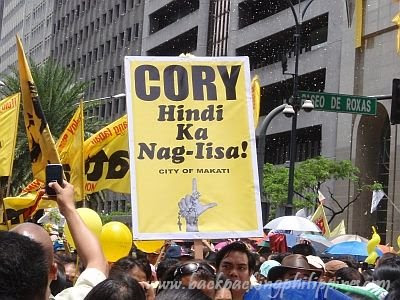 Note:
Cory Aquino was not a perfect president. She has her own mistakes and shortcomings but she also didn't have the lust for power and greed. She could've prolonged her stay in power as she came from a revolutionary government, but instead gifted the Filipino not just the restoration of democracy but also the 1987 Constitution that the present administration of PGMA and her minions are trying to amend to suit their own, and not the Filipino people's ends.

All photos were taken with Tutubi's hand held high, with so little room to adjust. Olympus Stylus 850SW (Imagine how it would've been if he had used his Nikon D80 to shoot this event)

I was so touched by the out pouring of love by the people I have to hold back tears. She truly is loved by all. May she rest in peace.

how lucky of you to be part of history.

Lucky you, you were there. I only saw footage online.

R.O., was there right in the middle of it

mari, yes and now look at the actual funeral...hundreds of thousands even millions worldwide

the crowd simply shows how Cory is loved by the people!

Good coverage of this event.
She meant a lot to her country.