A trip to Dapitan City in Zamboanga del Norte won't really be complete without paying a courtesy visit to the estate of Jose Rizal, Philippine National hero, who once lived on exile in Dapitan.

It was during the period from June 1892 to July 31, 1896 that Jose Rizal spent years of his life as a physician where he treated many eye patients including that of his mother; an engineer, even without formal training, managed to design and build a water system that provided water to Dapitan (that awed modern day engineers due to lack of tools during his time); an educator where he founded a school for boys (one of his students was Jose Caancan who came all the way from Paete, Laguna); a businessman engaged in hemp, copra and log trading; agriculturist by planting various trees in his Talisay estate. All these in addition to being a linguist (fluent in 22 languages), inventor, scientist and artist. 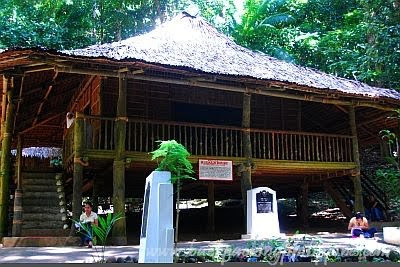 photo of Rizal's house in Dapitan (yeah, NHI chairman Ambeth Ocampo should be informed that those NHI markers obstruct the view). The woman in white, not a nun but a member of a Rizalist sect worshiping Rizal as a God doing, does volunteer work in maintaining the shrine.

Rizal described his life in Dapitan in a letter to his Austrian friend Ferdinand Blumentritt dated Dec. 19, 1893:

"I shall tell you how we live here. I have three houses; one square, another hexagonal, and a third octagonal, all of bamboo, wood and nipa. In the square house we live, my mother, sister Trinidad, a nephew and I; in the octagonal live my boys or some good youngsters whom I teach arithmetic, Spanish and English; and in the hexagonal live my chickens. From my house I hear the murmur of a crystal clear brook which comes from the high rocks ; I see the seashore , the sea where I have small boats, two canoes or barotos, as they say here. I have many fruit trees, mangoes, lanzones, guayabanos, baluno, nangka, etc. I have rabbits, dogs, cats,etc. I rise early - at five - visit my plants, feed the chickens, awaken my people and put them in movement. At half-past seven we breakfast with tea, pastries, cheese, sweetmeats, etc. Later I treat my poor patients who come to my land; I dress, I go to the town in my baroto, treat the people there, and return at 12 when my luncheon awaits me. Then I teach the boys until 4 P.M. and devote the after- noon to agriculture. I spend the night reading and studying." 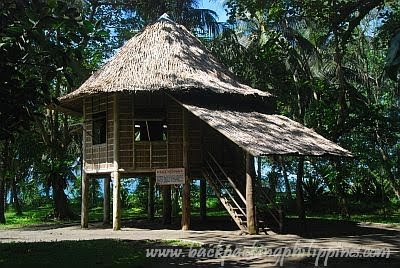 Casa Redonda, the hexagonal house of Rizal where his chickens lived (lucky chickens) 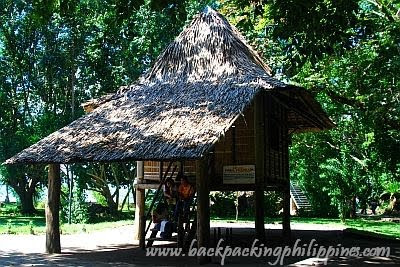 Sept. 21, 1892 Rizal received his lottery winnings, via the mail boat Butuan, for second prize of P20,000.00. His share of the "lotto" winnings was P6,200.00, P2000 of which he gave to his father, P200 to his friend Jose Maria Basa in Hong Kong and the rest he used to buy the land in Talisay that he developed. It should be noted that Jose Rizal had no vices, except playing the lottery.

The aborted duel with a Frenchman named Juan Lardet due to a business deal. Mr. Lardet wrote a Dapitan merchant about the deal that was forwarded to Rizal who was instantly angered as it's an affront to his integrity. The duel didn't materialize due to the intercession of Spanish Captain Carnicero on Mr. Lardet due to his knowledge of Rizal's expertise on martial arts especially fencing and pistol shooting, making the Frenchman the underdog in the field of honor.

Fr. Sanchez, Rizal's favorite teacher at the Ateneo, visited him in another effort to bring him back to the Catholic fold; it again ended in failure. Fr. Sanchez was the only priest to publicly defend the Noli Me Tangere in public.

The Jose Rizal Pastells debate on religion occurred during this time where the Jesuit priest Fr. Pastells tried to win back Rizal to the Catholic faith. In spite of this, Rizal still heard mass at Dapitan Church but with his own variant of enlightened Catholicism.

Pablo Mercado, whose real name was Florencio Namanan, was sent by Recollect Friars in a secret mission to spy on Rizal in order to incriminate him for revolutionary activities. He never succeeded in his mission as Rizal figured him out early on (it's not an assasination attempt on Rizal, but merely an espionage mission)

Due to his earlier successful stint as an eye doctor in Hong Kong, Mr. Taufer accompanied by his stepdaughter Josephine Bracken visited him for an eye operation. Josephine Bracken later became his wife (though they never really had a church wedding nor a civil wedding due to refusal by the friars and civil authorities, Rizal and Josephine had a son who died shortly after birth due to miscarriage).

Perhaps the most significant event that occurred in Dapitan was the visit by Pio Valenzuela (from whom Valenzuela City of Metro Manila was named after), a member of the secret society of the Katipunan founded by Andres Bonifacio, where Rizal was presented the plan of the Katipunan to which he decided not to support arguing that the people should wait for the right time to launch a revolution and avert shedding of blood. He also didn't approve of the Katipunan's plan to rescue him as it would reflect negatively on his word of honor. 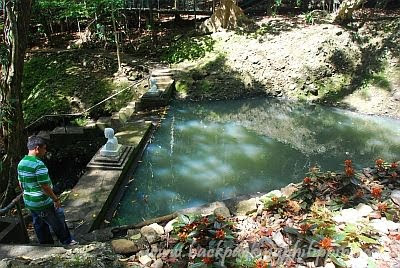 A pool of water that comprise Jose Rizal's aqueduct that supplied potable water to Dapitan, a feat of water works engineering well ahead of his time according to modern day enngineers 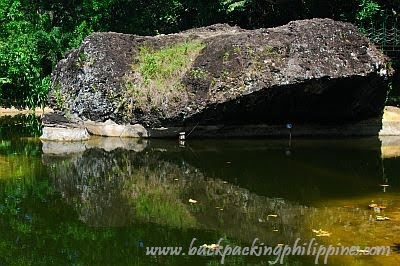 The Mi Retiro Rock, a large rock in Talisay where Rizal enjoyed watching sunsets. He also wrote a poem titled "Mi Retiro" on this rock.

Rizal Shrine is maintained by the National Historical Institute. The Shrine coumpound is always open and provided with a security guard. A museum is also inside the shrine that's closed on Mondays. Volunteer shrine tour guides and photographers are present at the gate. A tour of this shrine is included at Dapitan tour packages and field trips by Buklod and Dakak Park and Beach Resort. Contact number of the shrine to be posted once available. Rizal Shrine entrance fee: None (it's free)

How to get there:
Rizal Shrine is just a short tricycle ride away from "The Shrine City of Dapitan" proper. The closest airport is Dipolog Airport where you ride a tricycle to Dipolog Transport Terminal then a bus to Dapitan City. Travel time is just less than an hour.

Please don't request Tutubi for some sort of analysis and reaction paper to Jose Rizal's life in Dapitan. He doesn't tolerate laziness of some students looking for shortcuts. Jose Rizal won't be proud of you for sure.

Thanks for the brush-up on history.

More than just a virtual walkthrough but an important reading material. I like how the writings were delivered. Nice photos too!

That NHI marker should be moved to a better location...

I love those houses!
Have upgraded my IE to 8-version, seems to be working again here now!
Thx 4 tip.

mari, just one of my advocacies

dodong, thanks for the comment on my writing flow :P

ace, it's airy, perfect for tropical weather. examples of austronesian house architecture with raised floors and steps for stairs

pieterbie, wish i have one of them too

ive been to dapitan also....

Tutubi, I hope this question is not out of line. I am writing a paper on public history regarding the Dapitan site. One thing I can't get from books or from Mr. Cad at the Dapitan site is the cost it would take to travel from the Manila Domestic Airport and then using other modes of transportation to Dapitan. Could you give me a ball park figure? Could you detail the route one would take? Thanks.

hi dr yoder, from manila's airport, either NAIA terminals or the domestic airport, flights to Dipolog city costs about P1.5k (promo) up to P2.5k (estimate), then you transfer to a tricycle at Dipolog airport to the dipolog transport terminal (about P35.00) then a 20 minute bus ride to Dapitan City. I don't know the exact fare but it's probably less than P50.00 for a total one-way travel cost of P2600.00.
btw, i'm also a lurking member of rp-rizal yahoogroups :P

i am very happy that i am know taking rizal subject,,.because i discoverd a lot about Dr.Jose P. Rizal..and it makes me happy.we shoud be glad that RIZAL is our national hero...

Interesting write up but many inaccuracies. Please cross check with other articles.

anonymous, can you point where? also, how did you know i'm wrong and they're right? :P

As if a time machine brought you back to the deep past!