With over 800 species of birds in Australia, indigenous and endemic to the Australian ecosystem, Taronga Zoo's a perfect place for "birdwatching" in Sydney with the zoo's large collection of bird species in huge cages plus an amazing free flight bird show in the afternoon

Tutubi, a frustrated birdwatcher, arrived a little late at the bird show venue due to his return trips to the lair of the evasive tasmanian devil, a nocturnal creature that evaded him like the duck-billed platypus. Arriving late has it's advantage that he was able to position himself standing on the rim of the open amphitheater thus was able to move to get close to the action or a "bird's eye view" of the place. 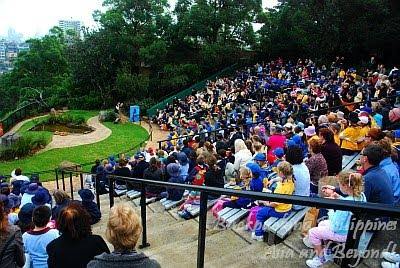 The free flight bird show was an interactive one that required audience participation to volunteer for various simple tasks like standing still at a certain part of the amphitheater or holding high a coin for birds to snatch. One of the first act was a an australian owl that landed on a volunteer girls arm when signaled by the bird trainer/host. 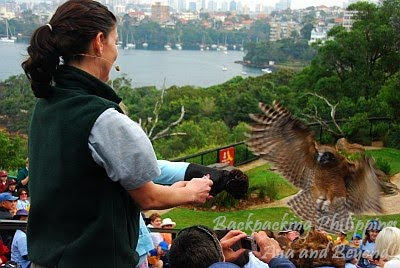 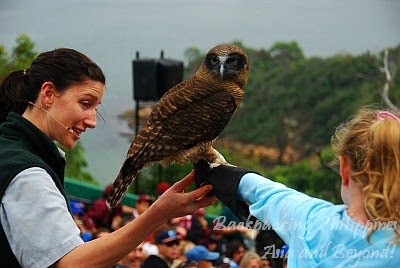 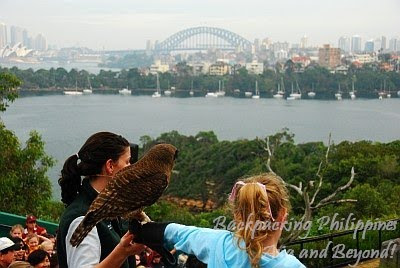 Succeeding acts were fly over by a wedge-tailed eagle while another show by Jojo and Jasper, a pair of galahs (rose-breasted cockatoos), wowed the audience when they snatched coins held by a volunteer but returned them to the volunteer when instructed to do so by the trainer. Other performing stars of the show were andean condors, black-breasted buzzard and black kites. 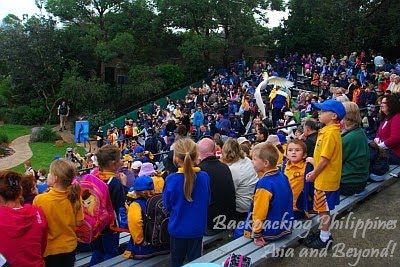 the coin-snatching cockatoo freely flying over the crowd

It's a good thing that Tutubi's strategy to stand on the outer end of the amphitheater enabled him to get close to the trainer and volunteers for close-up photos of the birds in flight.

That's very nice and also what a majestic looking bird. Well, Sydney is one of my future destinations and I am excited to see Australia's indigenous animals.

Great location for a bird show - overlooking the Sydney harbor, the opera house and the equally famous bridge. You do have a great shot of the owl!

nomadic pinoy, the owl and the pretty trainer :P

Wow! The owl looks amazing.. I'd like to have a close encounter with one too. :D

cza, afaik there's nothing like this bird show in pinas but we have so many birds in the wild for serious birdwatching adventure in the wild. some bird species may need to be discovered too

i can imagine these owls sending hogwarts international mail to little wizards in australia. haha.

Hehehe! It's good that you were not eaten by those birds :D

Seriously, I could have wanted to visit similar shows here in the Philippines but I didn't know if we have that here. What I only witnessed once was a dog show in La Paz plaza in Iloilo.

fortuitous faery, you really are a magical creature :P

dodong, i set the ISO to acceptable 400 to get a faster shutter speed since i know lots of movement involved here :P