National Heroes Day Tribute to Emilio Jacinto: The Brains of the Katipunan

The last Monday of August is a non-working holiday in the Philippines in celebration of National Heroes Day.

This day, Tutubi honors a man whose face used to be featured on the old 20 peso bill during the time of Pres. Marcos and also on the old 20 centavo coin: Emilio Jacinto

Emilio Jacinto was the young adviser of Katipunan Supremo Andres Bonifacio and the acknowledged "Brains of the Katipunan" for having prepared many Katipunan documents including the constitution and the Kartilya ng Katipunan. He's known in Katipunan circle as Pingkian.

In February 1898 during the Philippine Revolution, he was wounded in a skirmish with Spanish riflemen in Maimpis (a barrio of Magdalena town), brought to the Catholic Church of Magdalena but was denied refuge and treatment. He was taken instead to Santa Cruz Church where a doctor treated his wound. To evade capture by the Spaniards, he used a pass that belonged to Florentino Reyes, a Filipino spy captured before the Maimpis encounter. 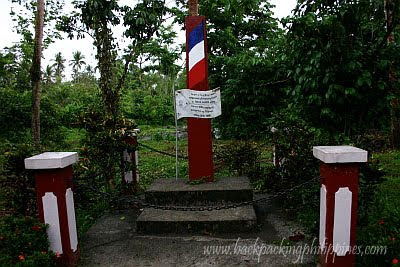 Tutubi chanced upon an old forsaken maker of Emilio Jacinto on the national highway in Magdalena, Laguna commemorating the battle of Emilio Jacinto. Opposite the marker is Bahay ng Laguna, a museum dedicated to the former Laguna governor Felicissimo San Luis. 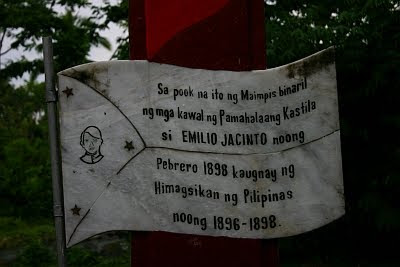 Emilio Jacinto was made the leader of the Katipunan in Laguna where he established his secret headquarters in the town of Majayjay. He died at a young age of 24 due to malaria.

What makes a person a national hero? Legislation did not make one for there's really no Philippine law declaring a person as such; there's only popular acclaim, even in Jose Rizal's case.

Did not know about this marker. Is it located near the church? I only saw the spot where Jacinto's blood stained the floor of the Magdalena Church.

True. We have no clear rules on how to declare a person a national hero or even commemorating an event historical. I agree with historian Teodoro Agoncillo. History should be written several years after the event took place... when emotions and its popularity has desipated and what's left are only facts and historical records.

By the way bro. I lost my phone while commuting in Commonwealth. You can strike out my old number.

bing, even ex-president marcos was barred burial at libingan ng mga bayani, but i concur with the decision makers :P

traveler on foot, it's not near the churchh, it's near the boundary of liliw, near a curve and where you see a religious image on the side of the road. the opposite house is another unnoticed museum i will feature someday. sorry about your cellphone

What makes heroes, indeed.
He didn't live very long, shame to see such an special person die so young.

He's the brain of the Katipunan, but not as popular. But for me, he is a true hero having had great contribution for the revolution...