The Kangaroos of Taronga Zoo

Even if Sydney Wildlife World, a local zoo in Sydney, is just beside Sydney Aquarium in Darling Harbour, Tutubi didn't bother to enter the animal facility due to his plan of taking the ferry the following day in Circular Quay to get to Taronga Zoo across the harbour.

There were many reasons why he decided to visit Taronga Zoo: numerous unique Australian wildlife like kangaroos, koalas, emus, tasmanian devils, wombats, platypuses in open living quarters (even the numerous venomous snakes of Australia) simulating natural habitats and not in cramped cages, but the most compelling of them all is probably the most famous symbol of Australia found even on the country's national emblem-- the kangaroo.

Photos of Kangaroos in Taronga Zoo: 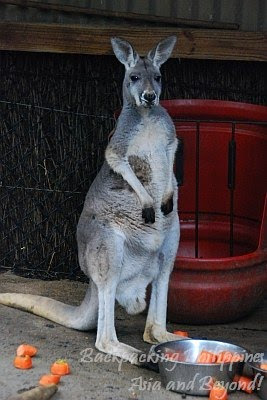 this kangaroo stopped eating carrots and posed for Tutubi 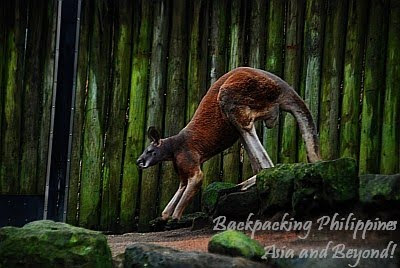 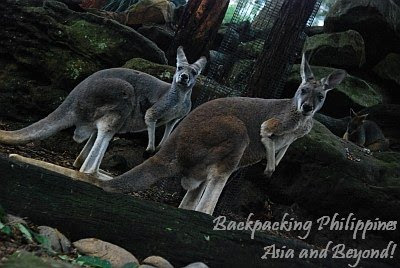 a kangaroo couple looked back at Tutubi for a photo-op 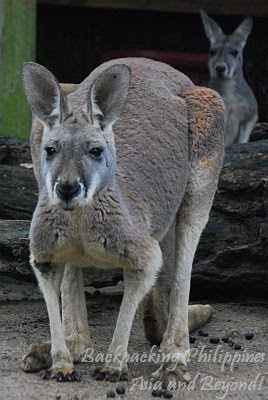 kangaroo in "attack formation" about 3 meters from Tutubi 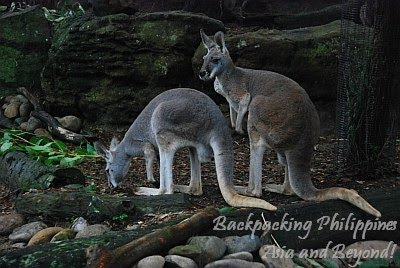 another couple inside the "walk-in" kangaroo enclosure of Taronga Zoo

It's just too bad that Tutubi wasn't able to actually see and photograph a mother kangaroo with a joey in her pocket, probably because Taronga Zookeepers nurture young joeys elsewhere instead of letting kangaroo moms rear them.

Kangaroos, like wallabies, belong to a group of mammals called marsupials distinguished by the females equipped with a pouch, called marsupium, in which they carry their young.

The smaller types of kangaroos are called wallabies

The word Kangaroo came from the aborigine word that means "I don't know." This came about when English explorers asked aborigines about the name of the bizarre animal standing on two legs with a pouch for babies. Since the aborigine didn't understand what the white men were asking, they simply replied "kangaroo."

Should you ask questions that Tutubi doesn't know the answer to, like the evolution of the kangaroo, expect him to reply: kangaroo!

I heard there are people in Australia who actually enjoy eating kangaroo meat. That's quite sad when you think of this animal as their country's most popular symbol (found even in their national emblem as you pointed out).

Wow, some very good photo's of these kangoos!
I guess you must have been able to get nice and close to them or you had a good lens and a clear view.

They are a cute bunch. I think I've seen one in the zoo.

the nomadic pinoy, yeah heard about those kangaroo meat eaters, probably the same as the carabao-meat eaters here

photo cache, if only i can take them home like the cuddly koalas :P

freeze, got too close to those kangaroo jacks that's why aided by clouds that diffused the light that day perfect for kangaroo portraits