Tutubi doesn't have to break the news about the passing of Cory Aquino, he was saddened on hearing the news but he's really expecting it even if he wished it to occur at a much later date.

With an errand he did that took him driving along Quezon Avenue and before going home, he turned the wheels of his car right towards Times St. after passing Great Eastern Hotel (Aberdeen Court) and passed by Cory Aquino's home in West Triangle near The Twin Hearts of Jesus and Mary Parish where he found many people offering prayers.

The problem however was that he has no camera with him in his car, quite rare for him to be without one, except his iPhone 3G but with dying battery managed to snap a few pictures of the peaceful scene at Ninoy's Home. 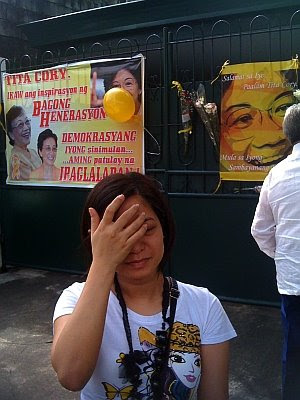 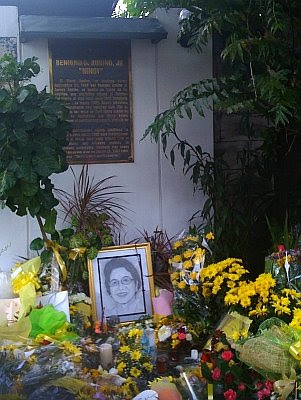 yellow flowers for Cory Aquino. Also visible is the marker for Ninoy Aquino

Before totally heading home, he dropped by Water Mart North EDSA to buy yellow ribbons to tie around his car's side mirrors and antenna.

For foreign readers, Cory Aquino is a former president of the Philippines, was the rallying figure of the bloodless "people power" revolution of 1986 that got rid of authoritarian regime of Pres. Marcos and ushered democracy.

How to get to Times St. Brgy. West Triange, Quezon City:

Commute: From MRT Quezon Avenue Station, walk and ride a jeepney going to Pantranco or Quiapo and request the driver to drop you off in West Triangle particularly the street after passing by Great Eastern Hotel. Walk to the right then turn right again on Times St where it's located about 50 meters from the corner.

From Quiapo, you can ride jeepneys/buses going to Fairview and alight on Quezon Avenue's West Triangle, cross Quezon Avenue using the pedestrian overpass up to Times St where you turn left heading towards the house.

I read about her passing away on Rayts's blog before I actually read it in the paper.
Shame you didn't have an cam on you indeed :-)