"Bumagsak na ang Bataan," Tutubi said when he went to Bataan to attend his officemates' wedding at St. Joseph Cathedral in Balanga with a sidetrip to the historic Mt. Samat, the site of fierce fighting at the onset of World War II and where the Dambana ng kagitingan (Shrine of Valor) stands to remind visitors of the gallant stand of American and Filipino soldiers in World War II.

Mt. Samat was the stronghold of combined American and Filipino forces defending the mountainous peninsula of Bataan against the Japanese from December 1941 until its capitulation on April 9, 1942.

The almost four month long resistance, caught the Japanese by surprise and delayed their war plan thereby saving Australia from the onslaught of the Land of the Rising Sun.

The Fall of Bataan on April 9, 1942 started the harrowing war crime called Bataan Death March where thousands of American and Filipino POWs were forced to march for about 100 kilometers, by foot interrupted by a train ride in cramped cars, for days without food and water to get to Capas, Tarlac. Thousands died during the ordeal and thousands more died at the concentration camp during captivity. 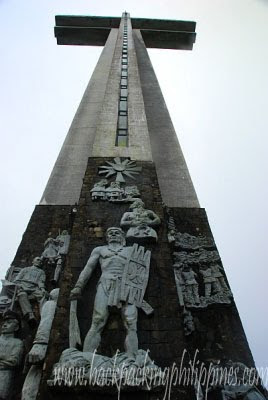 Mt. Samat Shrine, dubbed "Dambana ng Kagitingan (Shrine of Valor)," was built to honor not just the heroic efforts of the World War II soldiers who valiantly fought the Japanese invaders against insurmountable odds but also all other heroes whose heroics and deeds were enshrined like Jose Rizal whose bas relief occupies one side of the Memorial Cross, Juan Luna, Emilio Aguinaldo, Lapu-Lapu, Apolinario Mabini, Emilio Jacinto, Melchora Aquino, Gabriela Silang et al.

Now declared a National Historical Shrine, it was built during the time of Pres. Ferdinand Marcos on top of Mt. Samat, the base of the site of fierce fighting with main feature of a Monument Cross standing 92 meters tall made of concrete, marble and steel. 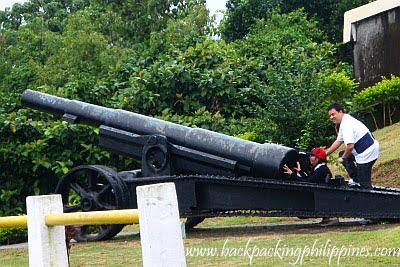 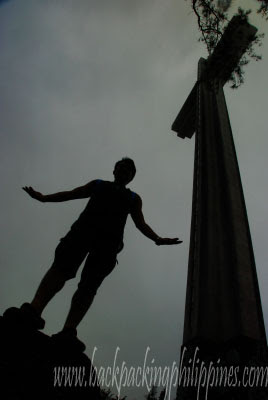 The sad part about the trip was that the rain almost spoiled the trip completely. Tutubi didn't bother to ride the elevator to get to the top of the Monument Cross to get a sweeping view of Bataan peninsula, Manila Bay and even Corregidor Island. A brief photo-op with officemates resulted to a few pictures (with one of his peers did an Oblation-like pose near the cross' base in silhouette). No other pictures were taken as the entire Mt. Samat was covered in rain clouds that even Tutubi's waterproof camera was rendered useless.

Dambana ng Kagitingan deserves a return trip for Tutubi as well as his wish to re-trace the infamous Death March route someday.

Overnight accommodations at Mt. Samat Shrine is offered at the Dambana ng Kagitingan Guesthouse. No information was gathered due to the rains.

There's also a museum inside the shrine but was not visited by Tutubi due to lack of time.

Shrine is open to the public from 8am to 5pm, Tuesdays to Sundays (closed on Mondays, no information on holidays as of posting time). Elevator access to the top of the Cross is closed during lunch break

How to get to Mt. Samat Shrine Bataan:

Driving Directions: From EDSA northbound to Balintawak take NLEX and exit at the SCTEx spur road after passing Dau toll plaza. After getting ticket at SCTex tollgate, choose the road going to Subic and exit at Dinalupihan (Toll fee: PhP88.00) Turn right at the end of the SCTEx exit road and follow road signs leading to Mt. Samat, Balanga or your destination town.

On reaching Pilar, Bataan junction, you'll see direction signs on your right pointing the way to Mt. Samat where you turn right (sign says the historic shrine is 11 kilometers away). Turn left on the road after passing Kilometer 19 Death March Marker

Travel time to Bataan (Mt Samat or Balanga) is around 2.5 to 3 hours from EDSA, Quezon City via NLEX and SCTEx.

Commute to Bataan, the backpacking way is not easy for the route to the historic shrine is not served by public transportation. The nearest point can be reached by Bataan buses is the Pilar, Bataan junction on the national highway where the shrine's 11 kilometers away. You can ride a tricycle at the junction or do some muscle flexing by trekking up the mountain.

Ferries to Bataan are available from SM Mall of Asia complex by MetroStar serving the Pasay to Orion Port ferry route. In Orion, you can ride jeepneys going to Balanga that pass by Pilar and alight at the junction for the jump-off point to Mt. Samat Shrine

Hi, thanks for the very timely info. We're planning to go there on Sept 21. Would you know if they are open on holidays?

denknees, i have no idea yet if it's open on holidays but sept 21 is a monday and the sign at the gate of the shrine said it's only open from tuesdays to sundays. i reviewed my post and i forgot that vital piece of info. updated my post to reflect the mt samat shrine hours.

hi, thanks a lot... too bad it's close on a Monday. Hope i could search for a contact number of the agency taking care of the site. again, thanks very much and more power...

denknees, it's probably the National Historical Institute (NHI) maintaining the site. try your luck there

Nice piece of information, tutubi. I got photos of this place posted at the old My Islands Philippines website. I was here in Feb. 2006 and was able to climb to the elevator. The wait is long kasi and daming turista (foreign and local) therefore mahaba ang pila sa elevator. Pero ang ganda naman kapag nasa taas ka na. I have here one shot there at the top that I used as random header sa website ko: http://travelogue.digitalrebel.ws/banner/banner017.JPG.
In my travel experience, most museum and similar establishment are closing on Mondays for clean up and for employees rest day. So, baka sarado ito on Monday.
If ever you would like to visit here again, consider contacting me. Gusto ko rin bumalik diyan. Mag-car polling or budget polling na lang tayo. Nong nakaraan na pumunta ako diyan, nag-hire lang ako ng tricycle na halos hindi makakaakyat...

Wow, that is one impressive monument!

Nice info and I like the photos especially the last one. It's so dramatic!

i like that last shot, very funny. i'm sure there will be other chances to go there tutubi. you'll find a sunny day next time.

pieterbie, i wasn't able to capture the cross on top of the hill in wide angle...next time

photo cache, glad you like it. a hurriedly taken shot actually