The most famous landmark and tourist attraction of Tacloban, though not really a part of the now highly-urbanized city, is MacArthur Park, now known as Leyte Landing Memorial. It dramatizes the landing of Gen. Douglas MacArthur on Read Beach with larger-than-life bronze statues of the general long with his entourage.

It was on October 20, 1944 when Gen. Douglas MacArthur waded ashore accompanied by then Philippine President Sergio Osmeña, Brig. Gen. Carlos P. Romulo (who'd become president of United Nations General Assembly) and Pres. Osmena's Aide-de-Camp Tony Madrigal (Don Antonio, the father of Senator Jamby Madrigal), to begin the liberation of Leyte Island and of the whole archipelago from the clutches of Imperial Japan. 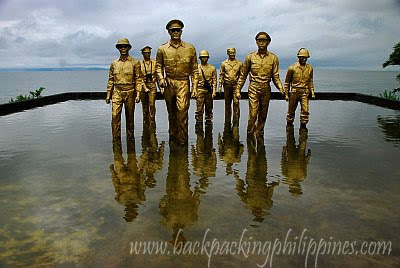 The beachhead in Palo town, a few minutes from Tacloban City, is not really colored red per se nor called as such due to red color of the blood-drenched sand, but a designation of the beach in planning by the US military. There's also Blue Beach in nearby Dulag town and similar conventions of beaches in La Union and Pangasinan in Lingayen Gulf during the landing in Luzon island and Yellow Beach in Zamboanga City. 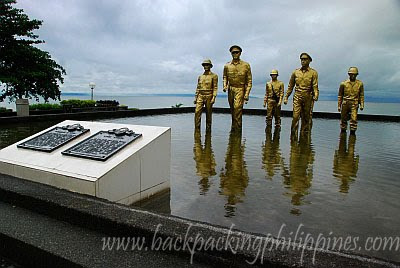 the MacArthur "shrine" with historical markers in view

the markers on the "shrine" reads:

"On this spot, Palo, Leyte, General Douglas MacArthur returned to the
Philippines on 20 October 1944 and personally led the swift drive
against the Japanese forces in the Philippines. President Sergio
Osmena arrived with General MacArthur and proceeded to reorganize, restore and administer the government of the commonwealth of the Philippines. Declared and National Historical Landmark 2004.

Alternate reports from actual observers and historians narrated how the dogmatic general spent five hours and three takes before the (in)famous video clip was recorded with him wading on Red Beach of Palo, Leyte, while the boats and his men on the shore were exposed to the blistering attacks of Kamikaze pilots from Pampanga that gravely put his men in danger because of his landing rehearsals typical of politicians for self-aggrandizement. 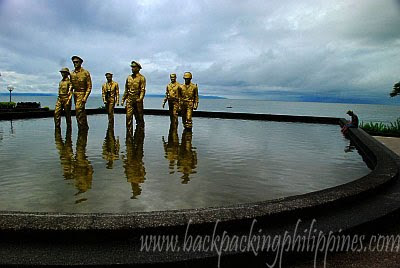 Lastly, does anybody know why MacArthur chose to land on the beaches of Leyte and not anywhere else? Historians know MacArthur initially planned to invade Mindanao particularly Sarangani Bay on December 20, 1944 but was diverted to Leyte two months ahead of schedule. It has something to do with guerillas (the unsung heroes) from Cebu. More on this on a future post.

How to get to MacArthur Park (Leyte Landing Memorial):

Commuting to MacArthur Shrine takes just two rides from Tacloban airport. First, ride a Tacloban bound jeep outside the Tacloban Aiport arrival area. Alight on the area known to the locals as Coca Cola (a park with a Coke factory with prominent Coke, Sprite and Royal giant cans as landmarks), cross the street then transfer to a jeepney bound for Baras (not Marasbaras) that passes by the park.

Those who took RORO buses or ferries to Tacloban can go there by taking a jeepney to Tacloban City center and transfer to Baras-bound jeeps near Tacloban Market, even Robinsons Tacloban mall.

I think this landmark is well made. I like the statues, kelan kaya ako makakarating jan?

Aptly posted on the 20th of this month. If I'm not mistaken, I think you already had posted this photos before somewhere here.
This is the part of the Philippines I've never been yet. It's totally a shame, Leyte is my mother's home province (before they migrated to Mindanao) and I havent' had visited this place before.

photo cache, you can only get there once you find yourself in a plane back to RP hehe...at least I took you there virtually

dodong, i took those pictures last year but waited for Oct 20 to post them...i only implied I'm going there but this is really the first time i posted the pictures :P I foresee myself going back to Tacloban in a few days/weeks

awesome statues..rain or shine or storm, they remain in place forever to remind us how precious or freedom is :)

just recently visited the place at it was so hot that we have to stay in the monument for only a few minutes. we then had our lunch at a beachfront along red beach. awesome place.

Wow terrific site and shot!
Love the reflection of the figures in the pond and the great natural background.

bw, freedom at a terrible cost. at least some nations learned lessons from history to never repeat mistakes from the past

lawstude, i have a pending return trip to tacloban....intend to visit samar

pieterbie, i intentionally took pictures with the water reflections. glad you liked it

Oh, I see. I haven't had followed all of your posts but I do remember your posting about this MacArthur Park. Wala pa palang photo yun and you really waited for this day in October.

Happy Halloween. It's a long weekend...

i target to travel here next year...very nice post..

Great photos and interesting trivia on the MacArthur Park. I assume Carlos Romulo is the small guy? I've never been there but those statues glistening in the sun look great memorials.

dennis, i'm going back to tacloban in a few days ;P

toe, i think so, he's so recognizeable on the landing video as the one who nearly sank in the water :P

MacArthur's second landing was in Lingayen Gulf, between Dagupan and San Fabian.
I visited the beach today. There is a marker there, and I'm guessing that it commemorated the landing of the Red Arrow division, the 32nd Infantry. But the plaque was missing. Vandalized I suspect. Nearby, is a Japanese-Philipino friendship monument, which appears in good shape. I'm not sure if this reflects a change in attitude in the area regarding Americans and Japanese.
However, I think a lot of Americans would be pretty pissed off to learn that the plaque was stolen. We(The U.S.) lost 24 ships in the gulf during the invasion here. We also lost 40,000 troops on our way from the gulf to Manila, fighting the Japanese all the way. I don't think we sacrificed 24 ships and 40,000 men so that some beach resort can charge people $.50 for access to the beach, or to be disrespected by vandals who are left uneducated by the Philippine schools about the sacrifices that our army made to liberate this third world country from Japanese oppression. I also ran into some girl scouts there, and boy, was I impressed with their skill in English! They were from Ifugao, which is up in the mountains past Baguio. Talk about remote. And an area generally thought to be primitive as well as remote. Well, these kids blew my socks off with their proficiency in English. I said, "You must have some really good English teachers in Ifugao." They said "Yes, we do." And they seemed very proud of this, and really glad to have a chance to use their language skills. So guess what? Guess where I'm planning to visit next?
You guessed it: Ifugao. Where girl scouts speak English better than anyone else I have met in the Philippines, except my own kids, whom I have trained myself.
So this was the only bright spot of the day. Good luck, girls! You keep it up!

tom, i've been to both lingayen and dagupan but have yet to visit the markers there...thanks for the report on the vandalized plaque

i hope this month also visit the macarthur shrine park even my place of grandfather.