In front of Tutuban Center mall on C.M. Recto Avenue, Tondo, Manila, situated in a small public park, is a monument in honor of the founder of the secret society of Katipunan on this day marking his coming into this world. 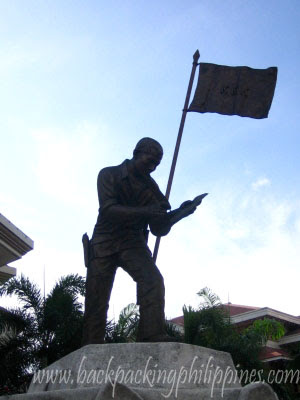 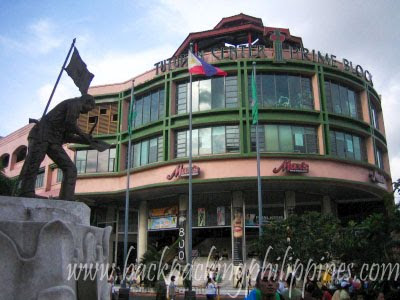 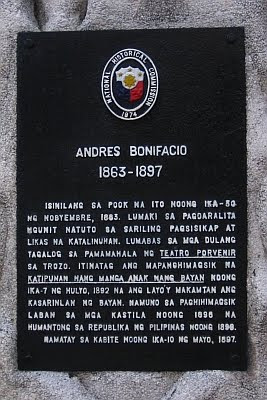 another marker has these Spanish inscriptions:

It's mentioned above the Andres Bonifacio is always falsely featured wearing red trousers, said to be uniform of Katipuneros, but actually not true-- Katipuneros were not stupid to wear red trousers as uniforms for they're easy targets of Spanish mausers in battle.

i haven't noticed this Bonifacio statue in Tutuban. but then i've never been to Tutuban in quite a long time. great shots, by the way.

Off-topic:
Thanx for the invitation for the Malabon event on December 9. I'd really love to go especially that I'll see Tutubi in person then **wink** **wink**. Kaso lang, my wife and I will be leaving for Cotabato on December 9 din. 11:45 ng umaga alis namin. We'll be back on the 20th pa. Sayang... Pero kung meron pang mga ganitong event in the future that you'd like to visit, please invite me again. Baka makakapunta na ako during that time...

hi friend!! thanks for the information..nice work.....
have a nice day!!

about the katipunero uniform.. oo nga naman, ano? this is an interesting piece of information. how did the white shirt and red trousers come about?

luna, don't know anything about his favorite color hehe

dodong, there are other times :P

friendz, thanks for dropping by

carlotta, i don't know. he was also always protrayed with a bolo but he was said to be wearing an overcoact during the cry of balintawak :(