Formerly part of Dapitan City and now the capital of the province of Zamboanga del Norte, is the gateway to the Shrine City of Dapitan where Rizal Shrine, Dakak Beach Resort and the new Gloria de Dapitan theme park is located.

A brief tour of Dipolog City materialized on the way from Dapitan City to Dipolog Airport to catch Tutubi's flight back to Manila.

At the intersection of Estaka and Turno road, there's Dipolog Fountain (sometimes called Estaka-Turno Y junction Fountain), according to the official website of Dipolog City, "located at Estaka-Turno road junction is the Fountain of Blessings. The statutes represent the tri-people of Mindanao, which symbolize the diverse cultures prevailing in Dipolog. The bowl raised to heavens is a gesture of thanksgiving and offering to God Almighty for the generous outpouring of graces and blessings, bountiful harvests and sustained peace and prosperity." 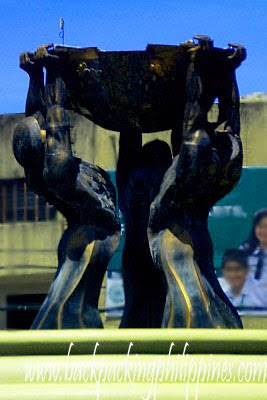 a photo of Dipolog Fountain taken inside a moving van. This fountain would surely look great at night with water and lights but no time to even stop and take a better snapshot

Onwards you'll come across the "Sta. Cruz Marker (Punta Corro) which is the spot where migrating Boholanos from the Visayas landed on and planted the cross for Christianity on May 3, 1905." 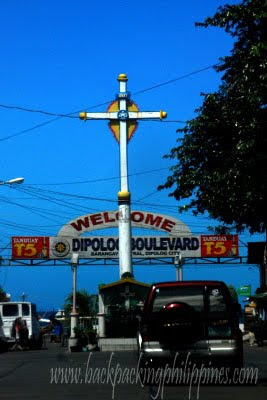 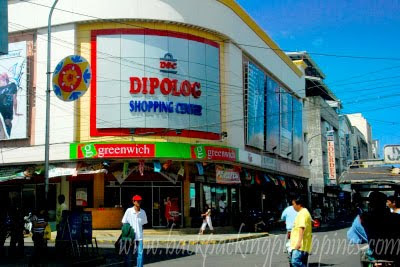 Dipolog Boulevard is a development of coastal park now a favorite haunt of promenaders and fitness enthusiasts. 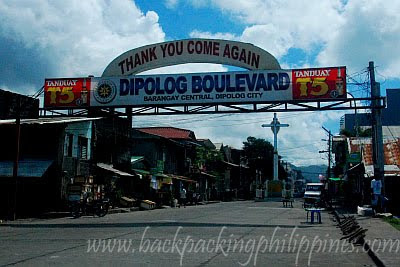 Other places to see in Dipolog that Tutubi wasn't able to visit due to lack of time: Sungkilaw falls, Subanen Village in Cogon Eco Park, Organization of International Spiritual and Cultural Advancement or OISCA Forest Park for trekkers and nature trippers being a mountrain trail and bird sanctuary, the 3003 Steps to Linabo Peak (a holy week trek destination). No information yet on why the local government of Dipolog is marketing the city as Orchid City of the Philippines.

Other tourism activities in Dipolog include the annual Sinulog sa Dipolog every 3rd Saturday of January with the usual street dancing for the Sto. Niño, Katkat Sakripisyo at Linabo Peak in April, and the Pagsalabuk Festival in May marked by harvest rituals of the Subanens, Feast of St. Vincent Ferrer during 3rd Saturday of May, Araw ng Dipolog marked July 1 to 6, Feast of the Lady of the Holy Rosary in October, and the nightly shows during Pasko sa Dipolog in December. Take note also of Araw ng Zamboanga del Norte.

Dipolog can be reached by plane from Manila via Dipolog Airport and by ferry via the Dapitan Seaport. Buses from other parts of Mindanao e.g. Davao City (via Butuan City), Cagayan de Oro City (CDO) and Zamboanga City are available.

drive-by Photos of Dipolog City taken inside a cruising van and may appear a tad blurry or color-skewed.

Related Posts and Nearby Places in Dipolog:

boracay lover, the theme park i saw was not yet finished when i was there but it's more like a mall setting with a carousel, don't know about other rides...just heard on the news that jalosjos now opened it...will probably ask my contacts there one of these days

It's so sayang that you missed some of the important places right there in Zamboanga. You should come back there to visit those places...

I'll wait for the Dipolog pasalubong shopping next post ;)

me naiisip ako when dipolog is mentioned.. but i have not been there.

im so proud to be dipolognon..guys theres so much things un discovered in my place..i hope all of u can explore it personally.. its not just the stuff that makes us different but we the people itself remains the beauty. see ya in dipolog. i miss my only love. Dipolog.

I miss my birthplace very much. I want to see that theme park in Dapitan and Dakak again where i worked last 1989