As blogged on an earlier post, Tutubi went to Binondo particularly on Ongpin St. in Manila Chinatown on Chinese New Year (also Valentines day). He didn't bring his car to Binondo just to avoid heavy traffic and parking woes typical in Binondo area.

Some photos of Lunar New Year celebration in Manila Chinatown: 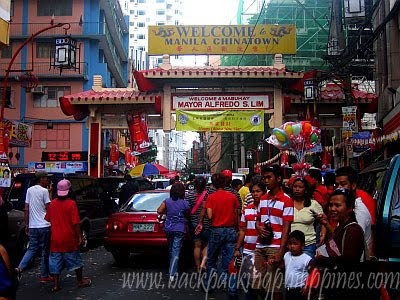 the welcome arch of Manila Chinatown on Ongpin St 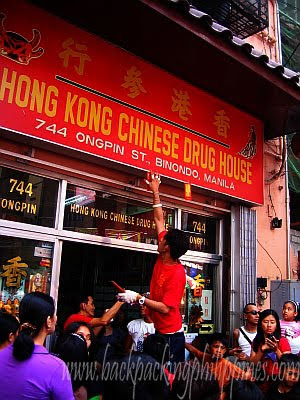 the hanging of the ang pao, red envelopes, given on Lunar New Year and other festivities on the door of business establishments. this one's Hong Kong Chinese Drug House on Ongpin St. 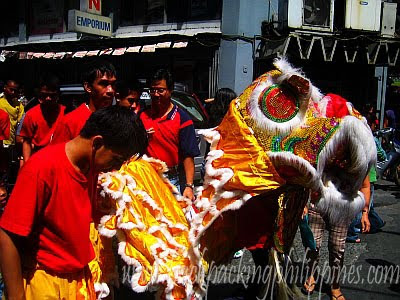 after dancing in front and inside the chinese drug store, the dragons will get the ang pao hung on the door, all to the beat of drums and noise of firecrackers 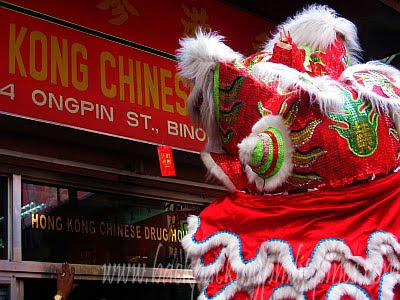 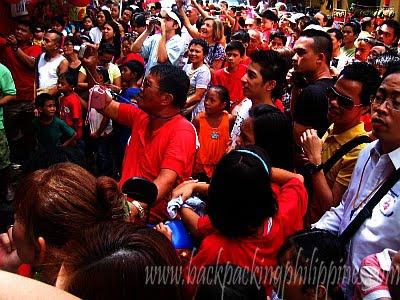 People wear red, the color of Valentines Day...err...lucky color for the Chinese/Tsinoys 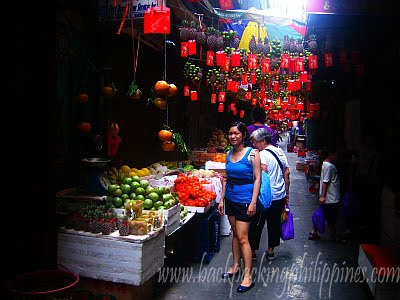 even nearby Carvajal Street, a narrow alley where you can buy exotic fruits have lots of ang pao hanging overhead It took Tutubi only less than two hours on Ongpin to take a few pictures then hurried to New Po Heng Lumpia House on Quintin Paredes St (Rosario) where he again partook of, what else, but the house specialty-- lumpia.

The day was capped with a visit to nearby Divisoria for a few things then hurried home to celebrate valentines day.

Few surprises of the trip were accidentally catching Old Manila Walks conducting the famous Big Binondo Food Wok at New Po Heng Lumpia House and also a group of bloggers led by Dong Ho including Chyng who's a new blog friend of Tutubi.

Nice meeting you both though it's a very brief encounter. Wouldn't have known if not for Ivan noticing the presence of Tutubi.

Nice photos here. I wish I can join your "walk" on next occassions. i think okay lang if you use your point-and-shoot camera instead of the SLR. SLR is bulky and can get so inconvenient at times especially in crowded areas. Point-and-shoot camera is smaller that you can just carry it with you inside your pocket. Ako, if I don't use my SLR, I use my mobile phone camera...

chyng, initially thought you were part of Ivan's tour and didn't know Dom was there. I sent him a text that i'm going to Binondo but received no reply from him. Didn't know Ivan was there for his tour finale

Well... I was not in Binondo on Valentine's Day... too many tourists on that day ;-)
I was in Binondo on the Saturday...it is just easier to take pictures the day before Chinese New Year...it is exactly the same events but with half the amount of tourists and photographers... which is much better :-)

Another advantage...I could really concentrate on LOVE during Valentine's Day :-)

Sorry... Salibanda series is delayed for a few days :-0

sidney, so that's why not too many people and photographers that time. looking forward to see familiar faces in your salibanda series ;P

wow. red is the color of that day. glad you met my good travel buddy dongho as well as ivan man dy whom i met last year. hope to meet you one of these days. :)

Tito B, andun ka rin pala. Was there for only 2 hours just to stalk the dragon dancers and eat at Shin Din Kha. Anyway, Kung Hei Fat Choi!

lawstude, met ivan many moons ago and just one of the few persons who can really recognize a face in the crowd. i'll be sending invites to an event on july 24 and 25 in paete, laguna. hope you guys will be there :P

laga[og], about two hours din lang gaya mo but opted to go to Po Heng Lumpia where i stumbled into Ivan's Big Binondo Wok tour and the group of Dom...Dom and I wouldn't have met if not for Ivan who mentioned that i was there...next time tayo naman meet :P

hello. i was with dong ho, chyng and other fellow bloggers in po heng last sunday! actually,'twas chyng
who introduced me to your site and i swear i'll frequent here as i've already linked you in my blogroll. =)

docgelo, you're welcome here. sorry, you left Po Heng in a jiffy. How's Seng Guang Xi temple? passed by a few times there but have no pictures of the chinese temple. will link you up too