One of those souvenir items of Baguio that made it famous in the past, the "iconic" barrel man of Baguio, wood carvings of a man hiding inside a barrel, with a spring contraption that pops up a phallic symbol whenever the barrel is removed to display the naked man's "masculinity."

It has been some time since Tutubi saw these ingenious carvings made only in the Cordilleras, that even wood carvers from his hometown Paete, Laguna has yet to come out with a creation that they can symbolize their own like what the barrel man did for Baguio City (some people think of Machete but it falls short of being a symbol of Paete woodcarving) 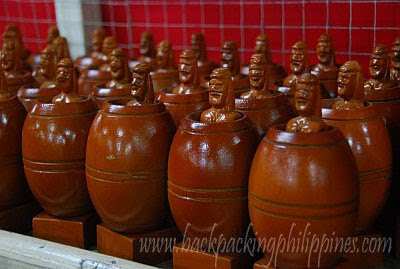 Some call it a nice souvenir, some call it art, a few tag it as disgusting, but Tutubi just say it's funny, even for first-timers clueless of what's hidden inside the barrel.

Where to buy the Baguio barrel man woodcarving? They're practically everywhere in Baguio City's souvenir shops, wood carving/handicrafts stores, and pasalubong centers. How much? Price depends on the size as usual.

In Manila, Tutubi used to find them at Balikbayan handicrafts in Quiapos Ille de Tulle (Ilalim ng tulay) near Quinta Market and some other Filipino cultural stores (probably SM Kultura but not sure).

I gave one to a white neighbor, when I got back here in the US, as a present. She cracked up when she lifted the barrel. Of course, I don't give it to just anybody; I have to be selective of who I give it to.

I've always wanted one of those to display in the house. Who can get me one?

mari, it depends on who you give it to...some conservatives will deride it but most people will have fun with it.

photo cache, I can snag one for you if I find one, I'm thinking of buying one myself once i get the house space to place all my travel mementos :P

i got this as a gift many years ago--it's funny. i used it a book end.:p

luna, i used to have one too but had it broken a long time ago.

sidney, there is a female counterpart of the barrel man, endearingly called barrel barbie, a girl inside the barrel but i've yet to see one. unlike a man with the phallous, i don't know about the woman version :P

Haha, revealing masculinity, that is just about universal. Here they used to have a monk that revealed all when you pressed his head.
Slightly touchy just lately, seeing that the roman catholic bishop of our province had to resign last week after a revelation that he had raped his underaged nephew repeatedly.

pieterbie, interesting, wonder if we can "exchange gifts" hehe but like sidney, i prefer the other kind :P

i remembered the first time i went to baguio and i was unaware of this. i got shocked! i was just a high school student then. unforgettable.

hehe.. i had some for pasalubong to my officemates many years ago. It was a hit :)