Friday nights used to be "gimik" nights for a bottle of beer or two at nearby bars in Makati, Ortigas and even as far as SM Mall of Asia for Tutubi and his officemates but lately those nights became history as they switched from toxic ways to the detoxification rituals like yoga classes on Friday nights.

Free yoga classes were offered by Tutubi's company to employees every Friday night as a way to de-stress the already stressed-out employees after a week of pressure-filled work. 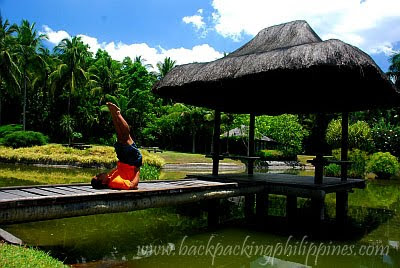 a yoga pose performed at a nice farm with detoxifying regimen of vegetarian cuisine in Lipa City, Batangas (still unposted, that's why)

On the first day of free yoga classes, many joined out of curiosity, but not Tutubi due to prior commitment, some came with yoga mats, many with 6x2 feet tarpaulins in lieu of the yoga mats that normally cost P300 each.

After a recent company trip to a nice farm in Lipa City where another yoga class was offered as part of the detoxification ritual ang healthy lifestyle promotion, Tutubi got hooked due to improvements of his chronic back pain that's been hounding him caused mainly by his sedentary work and lifestyle (lack of travel is more like it).

Months after the free yoga classes were offered, only a handful of regulars attend the sessions, the curious ones now gone, with many varied reasons: Tutubi due sto his back pains, his boss to manage his stress and relax, another to aid in scoliosis "treatment," while another curious case for improved sex life due to an article posted on the Internet claiming yoga improves sex life.

For whatever reason, why not try out yoga for a change?

i've been planning to enroll in a yoga class but other things like shopping, dinner, get in the way. my sister has been practicing yoga for years, probably the reason why she remains slim.:p

thanks for this reminder...tomorrow is a holiday, i hope i'd get motivated and check out yoga classes at Edsa Shangrila.

luna, diet + yoga for weight control? hmmm for sure the yoga sessions at edsa shangri-la's not for penny-pinchers like me. there are yoga classes in UP village quezon city, quite near my place but I think I can manage on my own on ordinary days for now :P

Yes you are right that yoga will give all kinds of happiness to us, which we can't get from any other source.

i haven't tried yoga. ok, to be honest, i'm not as good as what i preach about healthy living. i only take daily walking and few weekend household chores to keep my muscle cells for the very least, active. but i'm open to trying new things when i find time and chance.

any recommended yoga class near makati area? i've been planning to do yoga

Hmmmm... If you yoga can help me out shed off more of my weight, I'll gladly practice it... ;)

I should try yoga so I'd be mentally and physically fit.

very nice incentive and program. but i'd rather have free massage :D

i am not that flexible, ok na muna sakin ang gym :) pero who knows? maybe someday.

i love yoga! i used to do a daily routine of the basic yoga movements. it's an exhilarating feeling to do. but why did i stop? 24 hours is not enough that's why.

but one day, i'll be back with the routine!

This is really a great idea! I was thinking of visit yoga classes too, but there are none during summertime :(