A return visit to the historic site of the battle between the natives led by Lapu-lapu and the Portuguese explorer in the service of Spain Ferdinand Magellan where Magellan met his death, mostly due to his ineptness as a general.

Tutubi again visited the place on the request of his peer who wanted to see the famous site of the "battle of mactan".

A coral stone obelisk Erected in 1866 in honor of Hernando de Magallanes). It bears the words “Glorias Españolas (Glory to Spain)." 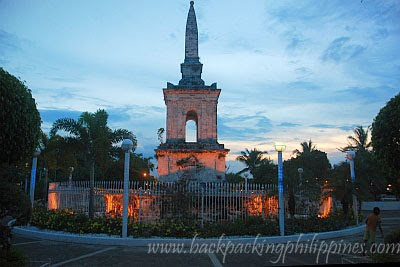 The Lapu-lapu Monument, made of bronze, at dusk... 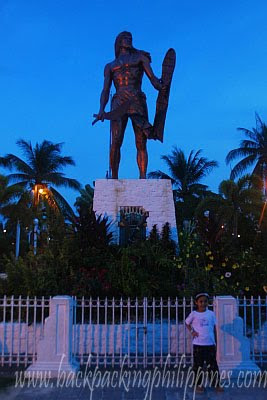 a closer view of the bronze monument... 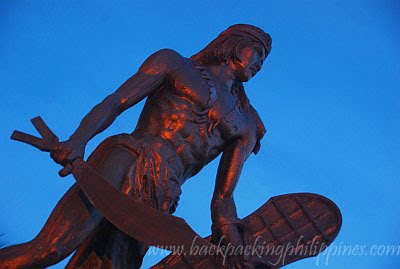 the Mactan Shrine mural and historical marker. The Battle of Mactan mural wrongly depict Lapu-lapu in combat with Magellan. The marker states "Here, on 27 April 1521 Lapulapu and his men repulsed the Spanish invaders, killing their leader ferdinand Magellan thus Lapulapu became the first Filipino to have repelled European aggresion." 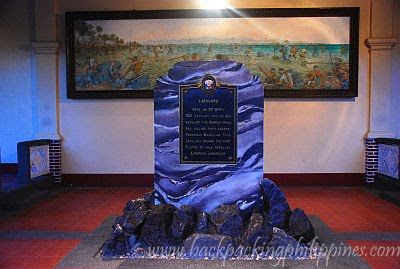 How did Ferdinand Magellan die? So many historical myths and hoaxes abound here but it's not really Lapu-lapu who killed him but a poisoned arrow to the leg. It was probably Lapu-lapu who dealt the final blow. He was killed due to his "stupidity" to charge at an enemy he didn't have any information on (remember Sun Tzu's Art of War?), and on the prodding of Rajah Humabon, an enemy of Lapu-lapu.

Rajah Humabon, who converted to Christianity earlier, later poisoned his Christian friends. What was left of Magellan's expedition later circumnavigated the world.

How to get to Mactan Shrine / Lapu-lapu Monument, Lapu-lapu City:

Commuting from the Mactan-Cebu International Airport, you can flag a taxi to take you there directly or a jeepney, popularly called multicab, with signboard Punta Engaño. Tutubi also observed jeepneys with So-ong Maribago signboards passed by the place from Mandaue Highway. The Shrine is near Shangri-la Mactan Resort and Spa and the the famous Sutukil seafood restaurants. No information on jeepney fares but the taxi fare may be about P250 from downtown Cebu City.

Directions to Mactan shrine? It's just a straight drive from Mandaue City via Marcelo Fernan Bridge then right to M.L. Quezon Highway all the way to the shrine.

i've been here before. and my family were creating stories on where in the lake they had the fight. but what i remember about this place is are the eateries beside it. anong tawag dun? yung parang sashimi ng cebu?

tin-tin, the eateries beside it is the famous SUTUKIL...there's lots of sugba, tuwa and kilaw there... :P

An interesting thing if you get the chance read up on how American text books teach the event in the U.S. as they have Lapu-Lapu down as a canabal for some reason. I was talking to a Fil-Am I know who couldn't believe they had not only written it as "FACT" but were also teaching kids that it was true.