First seen by Tutubi on TV with Diane Castillejo and Marc Nelson trying out the Philippines' first Skywalk Extreme on Studio 23 show Sports Unlimited on top of Crown Regency Hotel and Towers in Cebu City's Fuente Osmena, the adventure tourism facility was tried out by Tutubi recently after months of "planning" that eventually materialized along with two of his peers who were able to synchronize their hectic work schedules just to go there together.

After a tireful day working followed by a hearty dinner at Conching's Native Chicken and Fastfood near SM City Cebu, Tutubi and his peers hied off to Crown Regency Hotel to unwind and check out the adventure place they only used to see on tv. 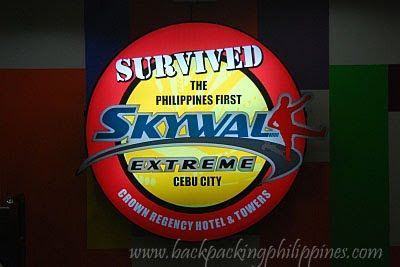 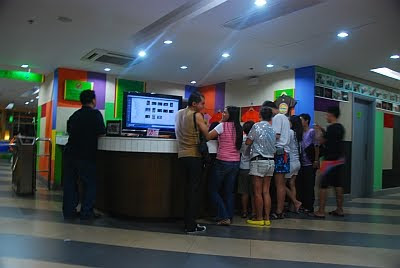 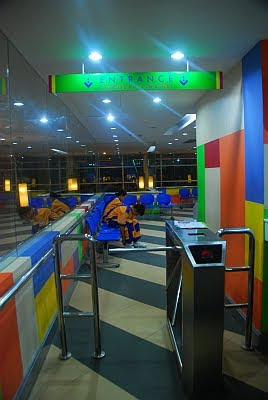 the turnstile area of the facility, the farthest your camera can go before you store them in your free lockers

Cameras are not allowed while you're doing the SKywalk or Edge Coaster ride, like similar touristy places, they ban cameras not just for safety but for...you know why...and have official photographers, with pathetic photography skills, to take your pictures that you can buy for PhP200 per print or P750 for everything stored in a CD.

The Edge Coaster Ride is a ride around the edge of Crown Regency Hotel and Towers where you can see the panoramic view of Cebu City, day or night, with the full view of the city below you-- not for people afraid of heights! 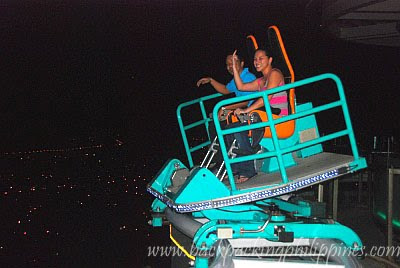 a stolen shot of Edge Coaster Riders on the 38th floor


The Skywalk Extreme lets you walk around a platform circling the building about 6 feet wide, made of glass so you can see objects below, while you're attached to safety harnesses. A photographer takes your pictures around several scripted poses. 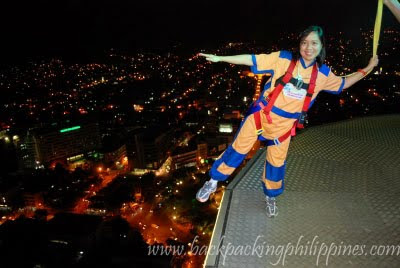 Skywalk Extreme: a pretty thrill-seeker holding on to dear life while striking a pose with Cebu nightscape as a backdrop.

What's so funny was that that Tutubi met two friends from the Mentor group who manages their company's team-building programs but were unaware that there's such a facility at Crown Regency Hotel and Towers that they didn't know even if they were at the hotel the night before.

Tutubi merely narrated a long list of adventure places in the country but cannot divulge his identity to be the author of this travel blog...so much for the primacy of privacy over publicity :(

Separate entrance fees and rides. Discounts offered for students or for those availing of other promos. Day tour rate of PhP888 inclusive of entrance fee, 1 ride, 4d movie and spa( 1 hour massage)

for updated information or group tours, you may get more information from Sky Adventure's official website or calling their contact numbers for inquiries.

i've been dying to try this! malapit na...:p

Luna, good luck to you hehe i'm looking for a new adventure thing to do in cebu...

i really almost do that on my last trip to cebu, sayang talaga hehehe. maybe next time.

we were in Cebu last year and we didn't try this one. I thought it's expensive kasi. syanag. ganun lang pala ka-cheap. next time

the rates are pretty much affordable. my friends say the skywalk adventure is a must-try and i will one of these days.. is there any other extreme activity to do in cebu?

I am still not brave enough to do that. I can relate to your sentiments about privacy. :)

I think this is awesome ! Love to try this. Not being able to take the camera sucks though. Baka lalo mas maraming pupunta if cameras are allowed .

anonymous, it's a touristy place and not for budget travellers. not that really an adventure for me though :(

I hav altophobia, pro bahala na c Batman, I will try it. Another thing that interests me is the Karting at Mabolo. I couldn't help but wonder if pwde bang subukan, even if I dnt know how to drive.

great informative post...i am going to cebu dis july and will definitely try dis. thanks and more power. =)