One of those virtually unknown victories of the Filipinos against the vastly superior invading army of the Americans (the others were the Battle of Paye (San Mateo Rizal), Battle of Catubig (Samar), Battle of Makahambus Hill (Cagayan de Oro), Battle of Pulang Lupa (Marinduque) that occurred on September 17, 1900 at the village of Mabitac, then a barrio of the town of Siniloan.

Tutubi stumbled on the colorful tableau, located near the Mabitac Church (Our Lady of Candelaria Parish Church), depicting the battle quite some time ago but posted the photos just now in time for the 110th anniversary of the encounter. 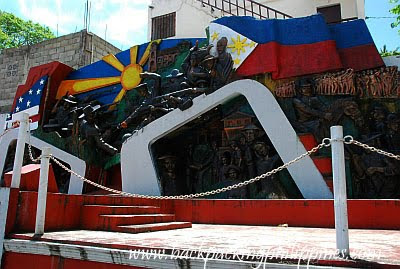 It was here where Filipino soldiers, who used mastery of terrain and employed guerilla tactics and under the leadership of Gen. Juan Cailles and Lt. Col. Fidel Sario, held back a contingent of soldiers under Col. Benjamin Cheatham upon orders of Gen. Henry Lawton. The Americans suffered numerous casualties even if supported by a Gatling gun-armed gun boat in Laguna de Bay. 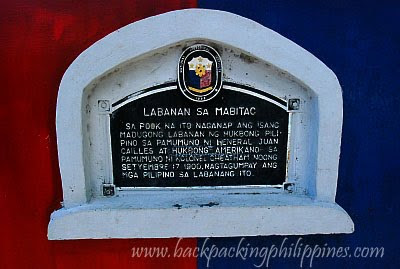 In the aftermath of the battle, Gen. Cailles, in contrast to American propaganda that he was a barbaric and murderous man, allowed Col. Cheatham to retrieve the bodies of slain American soldiers, in contrast to the disrespect the victorious Americans did to the dead bodies of Gen. Gregorio Del Pilar after the bloody Battle of Tirad Pass. 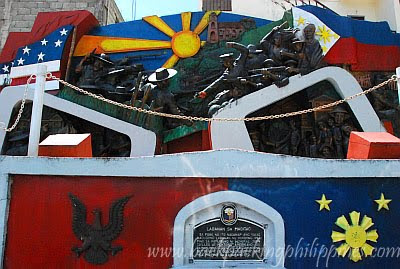 This post is written in memory of forgotten heroes of the Philippine-American War (formerly and erroneously called the Philippine Insurrection against the United States of America), not just the leaders but the hundreds of those killed, wounded, or suffered at the senseless war that befell these islands called the Philippines, long before Vietnam, Iraq and Afghanistan.

Gen. Henry Ware Lawton: Then a captain, was one of those responsible for the surrender of the Apache Indian warrior Geronimo. It's such an ironic twist of fate that as he was instrumental in capturing Apache Indian Geronimo, yet he died from sniper fire by a sharpshooter under the command of Gen. Licerio Geronimo during the Battle of Paye in San Mateo, Morong (now called province of Rizal). The City of Lawton, Oklahoma and the former name of Liwasang Bonifacio, Plaza Lawton, bear his name.

Col. Benjamin Cheatham: later served as a general during World War I in Europe, rose to that rank of Major General. Died in 1944 and buried at Arlington National Cemetery.

Gen. Juan Cailles: originally from Nasugbu, Batangas from a Filipino father and mother of Indian descent, leader of revolutionary forces in Laguna during the Philippine-American War later appointed by Aguinaldo as military governor of Laguna, served as governor of Laguna where he served multiple, non-contiguous terms and appointed representative of Mountain Province in the Philippine Legislature. Died of heart attack in 1951.

Lt. Col. Fidel Sario: no confirmation yet if indeed a native of Paete, Laguna with one of major street named after him. Died from bullet wounds incurred during the Battle of Mabitac. Waiting for more information from the National Historical Commission of the Philippines.

wow. thank you for sharing this piece of philippine history. will you be posting about the other battles?

carlotta, i think so. but i need to visit the site of the actual battles for some sort of pride of place :P

that was quite educational. Didn't realize that Pinoys actuall won battles against the Americans. Thanks for sharing

very educational post. i tend to learn a lot from your posts.

Interesting. I have highschool friends from Mabitac but we never really paid much attention to some interesting spots, except for the plenty of steps to reach the church. By the way, I have asked my family and friends about old favorites-recos. I'll let you know once we figure out.

bw, yes, there are others i've mentioned but yet to visit the battle sites.

traveler on foot, i thought you're taking your car in going there. didn't realize you're using public transportation. You can drop by there then take a tricycle later to Siniloan public market where the jeepney terminals to Tanay, Sta. Cruz (where you can drop by Pangil, Pakil, paete, Kalayaan, Lumban, Pagsanjan) even Real and Infanta-bound jeepneys.

witsandnuts, been to siniloan again and found WAPS Bakery on Pandeno St. nice vegetarian pizza there for just P200 family size. good find for me

I have highschool friends from Mabitac but we never really paid much attention to some interesting spots, except for the plenty of steps to reach the church. By the way, I have asked my family and friends about old favorites-recos. I'll let you know once we figure out.