Have you taken Philippine Airlines recently and looked at your Mabuhay Miles earned? Tutubi did took PAL on his recent trip to Cebu but only updated his Mabuhay Miles account to reflect the trip's earned miles and this is what he discovered. 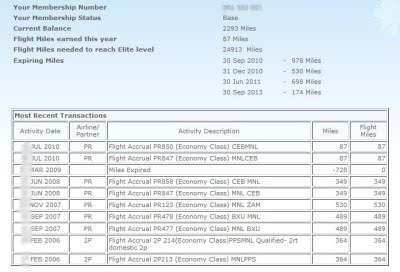 There are missing flights here, one's the Manila - KL (malaysia) flight he took in 2004, "sayang" but he forgot to claim and redeem his miles back then, plus his first airplane ride in 2002

PAL must really be in hard times, Tutubi used to think PAL means Plane Always Late, replaced by Pilots Already Left then the most recent notice of strike of flight attendants that can ground PAL's operations to a halt, sending another very bad signal to the international tourism and business community.

Anyway, Tutubi's just monitoring his Mabuhay Miles earned but does not have the intention to redeem them due to the simple fact that buying promo tickets is way much cheaper than paying taxes in redeeming free flights. He wanted to get the Mabuhay Miles card just so he can use the Mabuhay lounge at NAIA Terminal 2 (The Centennial Terminal used exclusively by PAL. There's also free wifi Internet at NAIA Terminal 2 that he doesn't need due to his preference for Sun Broadband and/or Globe Tattoo)

Tutubi has some expiring miles, but not enought to merit the attention of people buying airline miles in exchange for cash.

true! because of their "promos" either you earn 1 mile or 25% if you're lucky on your flights with them. it's almost hard to get to the next status level also because of these.

i also remember taking at least two flights 1-2 years back (to Vancouver) that didn't earn anything because of the same reason.

i've tried a number of times the past year to redeem but even with 6 months lead time, i'm having a hard time getting a schedule available for redemption, and if you're lucky to redeem, you will have to pay hefty tax.

I was able to use my earned miles only for one local trip many years ago.

That's sad. I'm flying with them pa naman this weekend :( Could the fare class be a factor? Like if it's a promo fare, you can still earn miles, but just a fraction of the miles you get if you bought a full fare ticket? It's really disappointing if you paid full fare and just got 87 miles!

jasper, so instead of redeeming their rewards, i'd rather not hehe

witsandnuts, good for you, ako wala as in NADA

nina, probably fare class but i got the actual miles credited to me two years ago on economy, unlike now they credited only a one-fourth of the actual miles traveled :( the worst thing is if your flight got canceled/delayed inca se the strike of the flight attendants occur

Earning miles is always on top of my head whenever I buy a ticket so I make sure that the particular sub-class is eligible (by checking an airline's website or calling directly).

Many airlines these days are quite stingy when you buy deeply discounted tickets, giving you only half, quarter or even no air miles at all.

I'm happy that my Marco Polo membership with Cathay Pacific has been rewarding - free tickets and that occasional free upgrade.

Your miles for the Manila - Cebu flight before was 349 miles. My flight for my Manila - Bangkok flight last Friday was 342 miles. Yup, they're cutting down the miles nga :(

nina, you actually re-visited this page to post your own experience hehe now you know. At least you got free flights from PAL in the past due to your earned miles.

Never been to philippines though, but this is a very good info.

Generally I find most reward cards here in the Philippines a waste of time and money. I had a reward card for SM last year with a fair few points on it but I couldn't even find where to redeem them. Like in the UK I just don't use any of them and that's what I have done here from now on its just clutter in the wallet.

matt, on SM advantage, you can immediately redeem your points at the cashier when paying for your purchanse. I think it's P1 for every 200 points, you can also inquire your balance from the cashier :P