One of Tutubi's fondest childhood memories were the days he spent fishing at dawn in Laguna de Bay with his late maternal grandfather, Dada Julian, where they collected shrimps trapped in simple contractions made of small plants and bushes as well caught the small, tasty yet pricey ayungin (silver perch), using improvised fishing rods with small shrimps as baits. 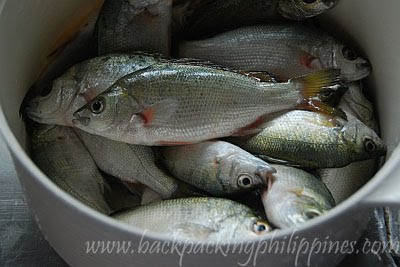 Ayungin (Scientific name: Leiopotherapon plumbeus), a freshwater fish species endemic in the Philippines, is omnivorous and has a silver color and small scales. It used to be plentiful in Laguna Lake and other freshwater bodies but overfishing by local fishermen coupled with the slow demise of the once pristine lake have now made it scarce. It is said to be the tastiest freshwater fish in the Philippines (the most expensive fish is the ludong, caught in the shores off Cagayan) is endemic to Laguna de Bay and was introduced to San Pablo City's Sampaloc Lake in the 1950s, then later to Taal Lake in the 70s.

Today, seeing ayungin in the public market of Paete is a rare sight, Tutubi buys them as they're unloaded fresh by fishermen on the shores of Laguna de Bay, a place locals call Wawa, at the point where Paete River (creek) meets Laguna Lake.

In Rizal province, particularly in the town of Binangonan, silver perch is caught commercially then made into dried fish (daing na ayungin) whose taste can rival the famous danggit of Cebu. It costs about P200/kilo in Rizal and Laguna and can go as high as P500 per kilo in Manila.

How to eat Ayungin, kamayan style:

Hold the fish with one hand then remove the upper and lower fins. Using your fingers, rub both sides as if you're pinching the fish from tail to head to remove the scales and expose the meat. Partake of the meat and roe, if present. Be careful of small fish bones (para di ma-tinik)

The ayungin is the Philippine national hero's favorite fish where Jose Rizal reportedly partook the fish, served in different ways, with hefty servings of rice. This was also narrated in his acerbic novel Noli Me Tangere where he wrote "the ayungin is good for sinigang; leave the biya for the escabeche, the dalag and the buan-buan for pesa."

Rizal has a very good reason why the ayungin is his favorite fish!

pieterbie, come on over and serve ayungin here for you :P

tutubi.. we have ayungin also in taal lake. i think it was the same ayungin of laguna de bay. i miss this fish specially its egg:D

thanks for that flavorful history lesson!

eric, maybe you're not from a coastal town of laguna hehe

deng, ayungin was introduced to taal in the 70s as mentioned in the post below. tawilis was not introduced in laguna though for exchange hehe

good to the taste but beware of the fish bones hehe... they're hard and sharp!

my lolo used to cook paksiw na ayungin seasoned with dilaw-pula (luyang dilaw). i haven't tasted this fish for quite a very very long time now.

this is a very healthy alternative to paksiw na pata hahaha!

Interesting! I studied in Laguna for four years but I don't think I ever encountered that fish. I wonder if they have those in the Lung Center Sunday market.

Thanks for the suggestion!

sarah, it's not the usual fish you'll find in canteens and quite rare these days in public market. one of the several native fishes of laguna de bay before the advent of the tilapia, bangus, bighead carp and the dreaded janitor fish

masarap ang isda lalo na pag ginatan. I could eat a bundle of this ;)

how to identify the gender of ayungin fish?

asteeg, i don't know. usually females are larger than males. the most definite one i know is that the some females have eggs :P