Just another example of lack of brain power exhibited by most government agencies was this just finished Dia Del Galeon Festival at Pier 13, South Harbor, Manila.

Tutubi got wind of the coming replica of the Spanish Galleon Andalucia to dock at Pier 13 much earlier but his tight schedule and work load won't permit him to take a leave of absence on a weekday to visit and board the galleon and instead tried his luck on the last day, a Saturday, where he expected many people to also try their luck in boarding the galleon. 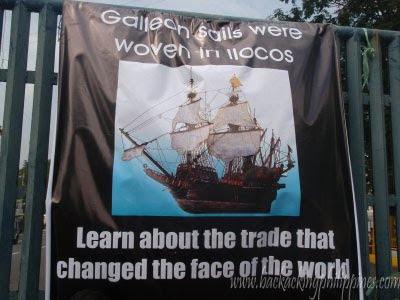 He was right! There were too many already queued as early as dawn, including a friend who lined up at 8am and yet the utter lack of system in entertaining excited guests, many of them children, who dared not to break the line just to ensure they'll get a glimpse of the ship made of wood and sails made of cloth woven in Ilocos, left the venue without even a glimpse of the galleon.

Tutubi merely took a few pictures of the tarpaulin banner with the galleon on it and the crowd at the gates of Eva Macapagal Super Terminal, then went to Quiapo to eat at Globe Lumpia House on Raon (now Gonzalo Puyat St.) as well as buy electronics parts, tools and stuff. 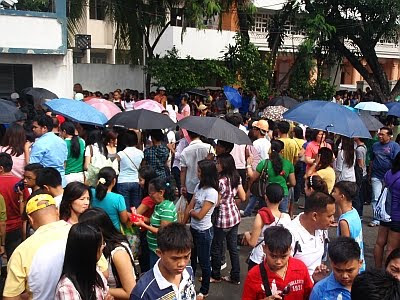 The long queue of people waited for hours just to see the galleon, many of them went home, hungry, tired yet no galleon in sight, thanks to the (dis)organizers

To the National Commission of Culture and the Arts (NCCA) and other (dis)organizers of this event, "Kudos" to you! Just to affirm how really good you are in handling events like this. No system was used in managing the expectations of the crowd, particularly on the last day, when it's expected people to come in droves and yet you never thought of contingency measures, merely did nothing...nada...none!

Next time, if the schedule won't permit at least the whole weekend, at least try to make the galleon dock at a location where people like Tutubi, if boarding it is impossible, at least the public can see and take pictures of the galleon say Manila's Baywalk, or the CCP complex. Isn't that hard to do or your brains just don't have the capacity to process or come out of ideas like it? Last Saturday's crowd also would've appreciated it if they're allowed to come near the galleon...
Tutubi's conclusion is indeed true, people in government are just too "brilliant" for events like this...

my friend and i went there on friday at 2pm but we weren't able to get in coz around 245 the guards told us that they're closing the place already. and to think malapit na kami dun sa gate! tsk. texted another friend who planned to go there saturday to be there as early as 6am. well, she did and got in by 11 na.

Many came to visit, very few got onboard, a lot more didn't and there are people lined up for hours who did not even catch a glimpse of the ship! How frustrating! Where was the galleon docked?

We were one of the few who were lucky to get inside. But it took as 8 long hours to have a glimpse of the Galleon. It is really "dis-organized"

We were one of the few who were lucky to get inside. But it took as 8 long hours to have a glimpse of the Galleon. It is really "dis-organized"

carlotta, hope the galleon andalucia returns in 2011 and the NCCA gets their acts together

bertN, Pier 13 south harbor...better if they docked at CCP complex but that's Pasay City so there may be politics involved hehe

pinoy adventurista, lucky for you unlike me :( better luck next time

We got into the pier, but could only see the boat's flag.

My review (and story) of the event here: http://smallhands.multiply.com/reviews/item/26

We wanted to see the galleon but knowing how NCCA organized events in the past, we know it will be frustrating.

Sila lang kasi nakakalam ng schedule ng events nila and usually the public is given a thin chance to take part in their events.