If you're coming from Quezon province or even Bicol region going to Manila, a popular pasalubong can be El Mare Special Buko Pie or the famous chicken empanada that can be bought at El Mare along Maharlika highway (left side if going to Manila). 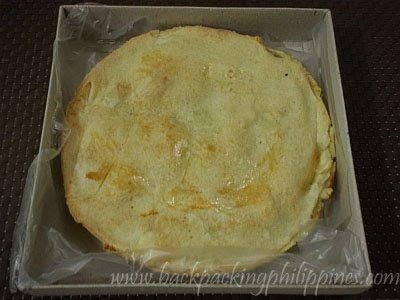 El Mare Buko Pie has tender strips of buko, with thickness of about 1.5 inches, is the best buko pie in this side of Laguna rivaled only by the ubiquitous Collete's Buko Pie which also came from San Pablo City. It has better packaging than the Original Buko Pie of Los Baños, Laguna but personaly, Tutubi still prefers the latter, followed by G&B Buko Pie of Nueva Vizcaya, Letty's Buko Pie and Sheila's Buko Pie both from Los Baños.

El Mare chicken empanada though, at PhP20.00/piece is a winner and perfect pasalubong to friends and family with its slightly crunchy shell and tasty filling. (The problem here's that Tutubi and friends gobbled up the chicken empanada in the car before he can take even sloppy pictures of them like the buko pie.) 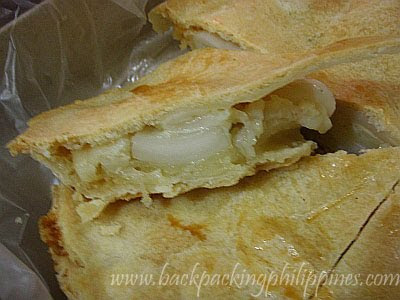 Will post something about the best buko pies in the Philippines one of these days along with GPS coordinates very useful for those with GPS or if you want to know the exact store locations via Wikimapia or Google Earth.

I'd like a whole pie of that buko pie right now. I wish they would have frozen buko pie for export to the US.

Buko pie, for the sake of your foreign readers, is a pie made from coconut fruit meat while Chicken empanada is fried chicken meat with carrots, raisins and peas, etc in a half circle thin bread that is eventually deep fried in cooking oil.

photo cache, why not try to bake buko pie yourself, try the best buko pie recipe you can find then start your own Original Buko Pie of California (or whereever you want it to be)...i'll post it here :P

Mary, thanks for this. i forgot to explain what buko pies are to my foreign readers lurking here :P