Tutubi's personal encounter with Oriang occured at the Nakpil-Bautista house turned museum in Quiapo, Manila where you can see Gregoria de Jesus' memorabilia plus a short biography of the heroine posted on a wall in one of the museum's rooms. 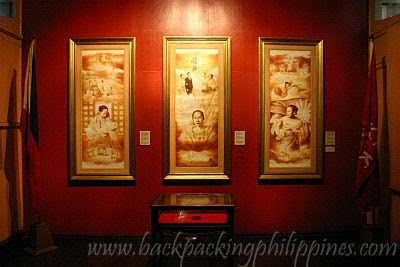 Andres' courtship of Oryang lasted only six months and it's no secret history that the parents of Oryang did not approve of her affair with Andres Bonifacio, a mason and widower whose first wife was a leper. Oryang's parents tried to separate the two even to the point of keeping her against her will in their house, but as history shows, they ended up together.

as posted on the wall of Bahay Nakpil-Bautista house:

"Gregoria de Jesus and Andres Bonifacio were married in March 1893 in Binondo Church. The simple Catholic ceremony took place at the insistence of Oriang's parents and was witnessed by Restituto Javier and his wife, Benita Rodriguez.

The following week, at the home of their godparents, the couple said their wedding vows again, this time in Katipunan rites. A celebratory dinner took place attended by close friends. Among the guests were, Pio Valenzuela, Santiago Turiano, Ramon Basa, Marina Dizon, Josefa and Trining Rizal.

That same night, Oriang was admitted into the Katipunan. She became the first woamn to be full-pledged member and chose the code name "Lakambini" meaning muse or first lady."

It is noteworthy that they claimed Andres Bonifacio and Gregoria de Jesus were married in Binondo Church but no actual church records were found to corroborate this claim that's why there's a suspicion that they were married under assumed names.

When Andres Bonifacio was arrested by Aguinaldo's men in the mountains of Cavite led by Col. Agapito Bonzon (or Yntong Bonzon), Yntong attempted to rape her on several occasions. (noted historian Ambeth Ocampo postulated in his book that Gregoria de Jesus was indeed raped if you read between the lines of the official transcripts of Bonifacio's trial).

With the execution of her husband Andres Bonifacio leaving her widowed, Oriang later married Julio Nakpil, another Katipunero and gifted with eight children. Her family lived in a a house in Quiapo owned by Dr. Ariston Bautista and his wife Petrona Nakpil that is now turned into a museum called Bahay Nakpil-Bautista on Bautista St., Quiapo, Manila.

Take note of the eight counsel translated as “Fear history, for there's no secret that will remain secret.”

Cavite, then, was not so kind to Andres Bonifacio: Emilio Aguinaldo, Daniel Tirona (who insulted him after the rigged election in Tejeros) and the most evil of them all-- Col. Yntong Bonzon, who divested Oryang of her personal belongings, including her wedding ring, and forced her to go up a room to rape her. Whether raped or just attempted, Col. Yntong Bonzon never paid for the crime, proof that the culture of impunity of the powers that be already existed then as it is now.

We dropped by this place several times whenever we are in this side of Quiapo. Iba yung feeling sa loob ng bahay... provincial. Different from the Quiapo outside.

True, Bonifacio and Oryang's lova story is so tragic. Bonifacio was killed May 10, a day after Oryang's birthday... ang lungkot.

I wish history books read like this, it makes historical figures relatable and therefore very real. This from someone who never paid much attention during Sibika and Hekasi. :) Thanks for the awesome post; I'll drop by the museum next time I go to Quiapo.

This is the first time I read that gregoria de jesus was raped by aguinaldo's men. What a tragic story.

and history remembered them as heroes