From Candon City, Tutubi tried to find the way to Santiago Cove in Santiago town but unreliable locals couldn't point him in the right direction. Tutubi's Garmin Nuvi GPS navigator was also useless in the area as it is unmapped (if Tutubi was able to find it, he'll update the map himself like what he's now doing to places he has visited)

Due to the problem encountered, he opted to go straight to the next Ilocos Sur "tourist spot" on his list: Apatot Beach, San Esteban town. This time, was able to find the right road to turn to with locals who directed him to the two beach resorts plus the modern lighthouse beside a barangay hall. 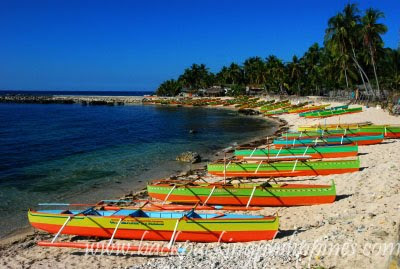 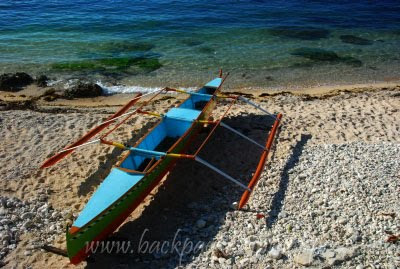 Apatot Beach's sand up close, is not really fine white but rocky at most. the water has very visible green algae too, irritating to swimmers and beach bummers

Tutubi's verdict:
Listed by Ilocos Sur Tourism office as a come-on for tourists, Tutubi finds it ordinary and not worth your time if you come from faraway Manila. It's a nice picnic place for locals though where the usual palce to stay at nearby beach resorts and while away time with the videoke machine at full blast.

There are only two beach resorts on Apatot Beach seen by Tutubi with
typical facilities and amenities. No phone numbers posted on the resort
walls, no official websites and published room rates, cottage fees,
entrance fees and overnight accommodations. Probably due to the fact
that they cater mostly locals. No swimming pools sighted.

For history buffs, this cove in San Esteban, Ilocos was the site of a
submarine surfacing during the latter part of World War II to unload
arms and supplies for the United States Army Forces in the Philippines
- Northern Luzon (USAFIP, NL. Remember in an earlier post, the Tagudin
Town Hall served as USAFIP, NL hospital).

The old historical marker that was washed away states: "
San Esteban Landing Site
Twice surfacing at Santiago Cove on November 21, 1944, the
USS GAR landed on this beach. Commandos of the Army of the United States
with equipment, arms, ammunition and supplies led by Capts. William
Vaughn and William Farell were Lts. Fred Behan and Donald Jamison with
two other Americans and Larry Guzman with other G Filipinos of the First
Filipino regiment. The landing was effected by USAFIP-NL under Col.
Russell W. Volkmann with other paramilitary and guerilla units. By order
of Volkmann, Jamison and Maj. Ferdinand E. Marcos sneaked through the
cordon of Gen. Tomoyuki Yamashita to an air strip in Isabela and flew to
Camp Spencer”.

Tutubi would have believed the story completely but there's mention of
Ferdinand Marcos as a war hero. Take note, no offense to many Ilocano
brothers who still put the Marcoses on a high pedestal, Ferdinand Marcos
was president with a very well documented dictatorship and falsely
documented exploits of war heroism. His medals of heroism during World
War II were all fake custom-made to glorify himself. Such vainglory!
Tutubi's glad the historical marker was washed away. It should've been
replaced with a properly verified marker by historical scholars of the
National Historical Commission of the Philippines (NHCP, formerly NHI).

i like the photos of the boats;
i don't know but i always like pictures of boats nicely captured.

I think Apatot beach has its pros in the sense of it historical value, but based from your review, it is quite under developed and the probably not commercial. I think for people looking into dwelling in a more quiet type of beach, this is suited. Otherwise, I am positive other beaches in the area are way better.

thepinaysolobackpacker, sa malayo parang ok nga pero sa malapit hindi. but if i live there, it's a nice pretty quiet place, something i prefer :P

cheap flights philippines, forgot to mention above that i prefer undeveloped beaches and not the crowded ones :P

unlike you who sit on your ass

nick, yeah he was in the war but not as he claimed to be...heroism with vainglory...and yeah, i sit on my ass, like all normal people do

Tutubi,
Did Pres. Marcos fight w/ you during the war?

RJE, nope. wasn't born yet. but historians, with authentic documents and firsthand accounts disproved marcos's claim to the medals. yes, he was in the war but his medals were fake. he even tried to pass himself as the hero of the battle of bessang pass to which many WWII veterans swore he was in nueva vizcaya. The whole world knows Marcos' medals were fake