Today would have been Carmela Vizconde's 38th birthday. How did Tutubi learned of it? She has no Facebook account to update but he simply found out when he visited Manila Memorial Park Holy Cross in Novaliches, Quezon City and found something...

The graves of the three victims -- Estrellita Vizconde, Ma. Carmela Vizconde and Anne Marie Vizconde -- of the grizzly crime of June 30, 1991 where the three were brutally murdered inside their home. Ma. Carmela was also raped before she was stabbed multiple times. 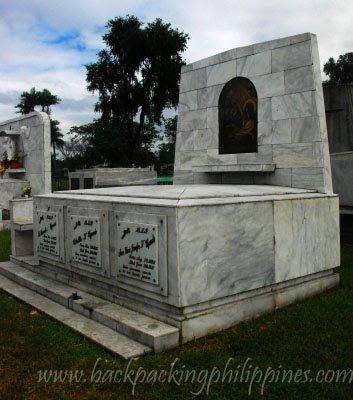 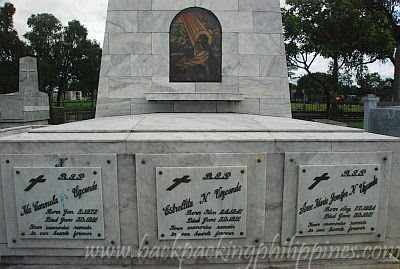 Picture of the graves of the three victims in gray marble with stained glass located near the central lagoon and chapel of Holy Cross Memorial Park (near the P. Cruz gate of Holy Cross)


A few days before Christmas, Hubert Webb and company were acquitted by the Supreme Court who ignored the testimony of star witness Jessica Alfaro and gave more weight to the alibi of Hubert Webb that he's in the US when the crime took place.

Lots of media coverage on this one even with Ramon Tulfo of the Philippine Daily Inquirer vouching for the truth of Hubert's alibi while a weeping Lauro Vizconde, the patriarch who was in the States at the time of the crime, was shown inconsolable.

Did Hubert Webb really not commit the crime? Reading parts of the dissenting opinions of the 4 Supreme Court justices where one mentioned that Hubert Webb could be in the US at the time but it's also not impossible for him to come home, commit the crime, then fly back.

One of the justices' opinion also claimed the original passport was never presented as evidence, not even the boarding pass, but the prosecution didn't focus on it's authenticity and the defense only presented the immigration officer, identified as Ferdinand Sampol, who testified he was the one who stamped the passport (how easy was it to produce fake green passports and departure stamps in 1991, unlike the present e-passport? Mr. Ferdinand Sampol now is reportedly hounded by human trafficking allegations according to Justice Secretary Leila de Lima).

If the 7 Supreme Court justices dismissed Jessica Alfaro's testimony like the original trial court justice who saw her sincerity "prima facie" during the entire trial (thus the convention), how about the testimony of the former househelp of the Webb's who testified she washed the bloodied shirt of Hubert the morning after the crime?

If we're also to believe that "flight is an indication of guilt," then why are the two remaining suspects Artemio Ventura and Joey Filart still in hiding (Joey Filart was already verified to be a real person hiding in the US according to the present NBI and DOJ)

If Hubert Webb and company didn't really commit the gruesome rape-murder, then they've really lost 15 years of their prime. They're guilt was never really proven beyond reasonable doubt when even the semen sample taken from Carmela was lost, something that could have really proved Hubert Webb did or did not rape the young woman by using DNA testing. The logbook of the security agency manning the BF subdivision gate was also "coincidentally" lost and was not presented as evidence.

Even if re-investigation of the case pointed back to them, they can't be tried again due to the "double jeopardy" rule but can apply to the fugitives Joey Filart and Artemio Ventura. But at least there'll be closure and the public will know the truth.

Who really raped Carmela Vizconde? Who killed all victims of Vizconde Massacre? It's one classic case of one witness vs one alibi, similar to the case, yet different ruling by the SC, for the Abadilla 5.

...And Justice For All...Err...Justice for the Vizcondes remain elusive and may forever be!

I hope the webbs and all those who were acquitted would help Mr. Lauro Vizcode look for those inhumane bastards/beasts who raped-murdered these ladies..