First of the Tour of Ilocos Sur series...

The southernmost town of the province of Ilocos Sur that straddles La Union province possess a timekeeping tradition used by ancient men using shadows cast by the sun to tell time.

The two sundials were constructed in the town of Tagudin by Father Juan Sorolla in 1848. One is located inside the 100 year old Saint Augustine School compound and the other stands in front of Tagudin town hall. 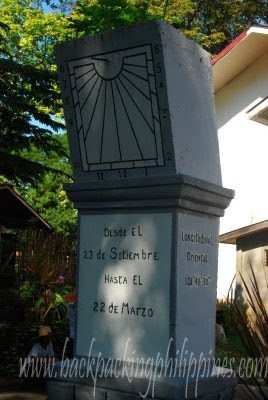 claimed to be the first sundial in the Philippines, Tutubi had to ask permission from the principal of St. Augustine School to see the sundial inside the campus (na-opis si Tutubi). You can't tell the time from this sundial as it's shadowed by a tree 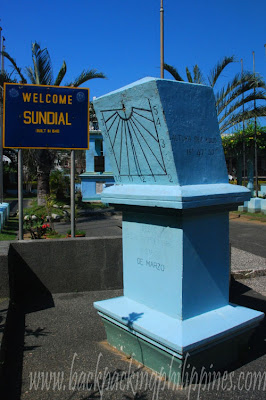 the second sundial in Tagudin is just on the town square right in front of Tagudin town hall. You can see it's almost 12nn when Tutubi visited the historic town

The Church of St. Augustine, made of brick and stone and earthquake baroque style started construction in 1796 and finished in 1832. The belfry, detached from the main church typical of earthquake baroque architecture was built in 1881. The church convent is now a school run by the Immaculate Conception of Mary Sisters. 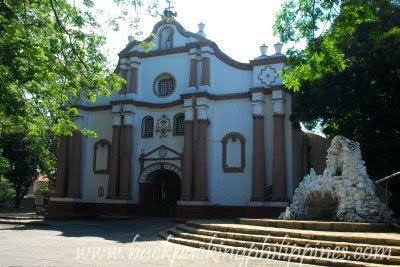 as seen from the sundial picture above, it's high noon when Tutubi passed by, not a good time to take pics but just to document...the bell tower not in view 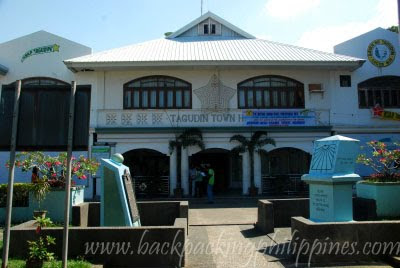 The base hospital was transferred to this town on 27 May 1945. Bringing it closer to the frontline where the battle were tremendously heavy. Headquarters was installed at the municipal hall while big tents set up on the town plaza and on the market site as well as the big residential houses bordering the town plaza were utilized as hospital wards. Manned at the height of the campaign by 881 military and civilian personnel, this hospital was biggest installation of its kind in the country during the Philippine liberation campaign."

a list of world war II veterans is engraved on a commemorative plaque also in the plaza where the names of officers and enlisted personnel and soldiers at the former military hospital. (Tutubi can send you high-res copies of the honor roll upon request)

Other interesting places in Tagudin, Ilocos Sur for verification if they're really interesting as no information can be found even on the official website of Tagudin (such a shame, similar problem to most towns and cities of the Philippines)

1. Becques Beach, said to be good but has to be visited to confirm
2. Baracbac Falls, a waterfalls in Brgy. Baracbac
3. Farola Lighthouse in barangay Farola (is this an old spanish lighthouse?)
4. The 200m long Ambalayat Hanging Bridge in Brgy. Ambalayat

Tagudin Sundial GPS coordinates: N16 56 01.8 E120 26 42.0
Tagudin, Ilocos Sur was not yet included on OpenStreetMap when Tutubi visited. He was able to add the two major roads to the map of Tagudin as well as the Tagudin Municipal Hall, St. Augustine School, the two sundials, and the town plaza.

we missed the tagudin sundial during our road trip to ilocos sur. Ganun pla istura nya. thank you for sharing.

I am still new in travel article writing and your blogs inspire me most. I was in Vigan last October 14, 2010 on a field trip. How I wish I had also visited Tagudin.

traveler on foo and edsan, there's always another time to go back and explore other places part of the "not the usual" Ilocos tour :P

ayan na ang inaantay ko na series! cool! I ddn't even know there's a sundial there if it weren't for your post.

I was expecting a rather different sundial. Yung parang sa Flintstones: round, flat faced clock.

"...they're really interesting as no information can be found..."

the tourism department we expect to promote places of interest and in the Philippines again proves its (in)competence.

the pinaysolobackpacker, i think i'm going back to ilocos sur soon. will have the opportunity to visit other places like santiago cove, bateria watchtower and others...

traveler on foot, hehe i have my own expectations but not the crude, prehistoric sundial made of rocks...you want me to rant again against those DOT incompetent and/or lazy people?