For people who can't fly out of Manila to witness Cebu's Sinulog festival, Kalibo's Ati-atihan Festival or Iloilo's Dinagyang Festival (4th sunday of January), herewith are your alternatives that's easier to reach and lighter on your pocket:

January 9 (Sunday): Feast of the Black Nazarene in Quiapo, Manila

On the third Sunday of January (January 16, 2011), here are festivities that coincide with the Sinulog and Ati-atihan with the all too familiar street dancing in colorful costumes, some patterned after the hugely popular Mardi Gras of Rio de Janeiro, Brazil.

Caracol Festival in Makati City. "Parade" route starts at the Gabriela Silang Parking at the corner of Makati Avenue and Ayala Avenue (Opposite Makati Shangri-la Hotel and the Peninsula Manila) and the performing
stage built at the corner of Ayala Avenue and Paseo de Roxas (Good vantage points from Ninoy Aquino Monument, The Enterprise Center, Insular Life Building and BPI Building). (Warning: This doesn't start on time though as experienced by Tutubi last year, so much for the premier city of the Philippines but with lousy organizers. Festival dance contest lasts deep into the night with mostly students from Makati's
schools as performers) 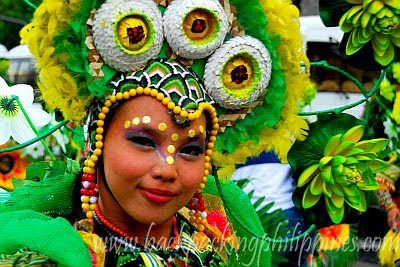 Recommend also the Salibanda of Paete, Laguna (Tutubi's hometown) where water splashing is done to festivity fun hunters and devotees. It's just a 2 hour drive away from Trinoma Mall in Quezon City via the scenic Antipolo, Baras, Tanay, Teresa Rizal route. Salibanda parade starts at 12nn from Paete Church, goes around town then proceeds to Wawa Park on the lake shore of Laguna de Bay in the afternoon for a fluvial parade of the Sto. Niño.

Should you know of the actual festival schedules and street dancing festival parade route (map desired), please hit the comment along with the proper attribution)

Will try to experience Caracol this year!

chyng, hehe my bad...will update later. thanks for the heads up :P

Sinulog is one of the best mardigras in the Philippines.