A Glimpse of Sulyap Gallery Cafe: A Restaurant in San Pablo, Laguna

A trip to a place for Tutubi won't be complete without looking for nice places to eat that's not the usual fastfood restaurants in every corner of almost every town, even with the advent of SM City San Pablo, he wanted a different kind of experience.

He got this wish during his second "official" visit to the City of Seven Lakes when he was asked by his contact on his wish on where to eat and promptly replied "I want to catch a glimpse of Sulyap Cafe and they took him there.

Sulyap Cafe stands at the site of the former school inside Cocoland in San Pablo, 2 minutes from Sambat Intersection (hmmm, such a redundant name, Sambat means intersection or junction in Tagalog, many places called Sambat in Sta. Cruz and Pagsanjan towns for example.) 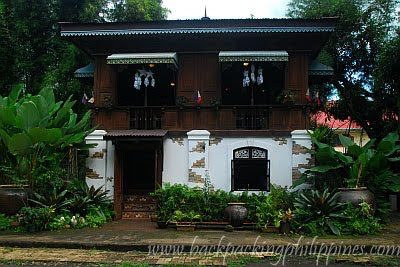 Sulyap Gallery Cafe is an ancestral house from Real, Quezon sold by its owner then transplanted to its present home. 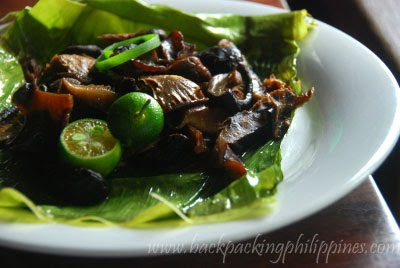 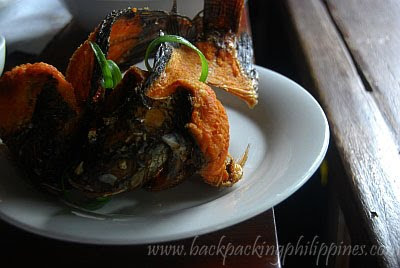 Crispy tilapia in oyster sauce. The tilapia is fried, well done with no salt; the oyster sauce with spices for dipping. 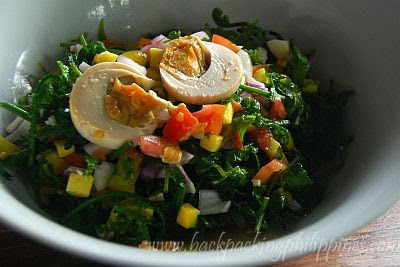 ensaladang pako (edible fern salad using fresh fiddlehead fern abundant on the slopes of Mt. Banahaw and Sierra Madre mountain range). The fern was fresh and crispy with the great balance of the saltiness of the itlog na maalat (salted egg) and sourness of the vinaigrette-like dressing. (a similar take of this exists at Chef Mau restaurant, Liliw, Laguna, another favorite place of Tutubi) 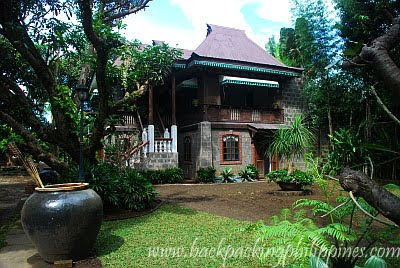 The newly relocated bahay na bato soon to be turned into an inn/bed and breakfast for those looking for overnight accommodations. That will surely compete directly with the nearby Casa San Pablo bed and breakfast.

Other Recommended dishes:
Kulawong Puso ng Saging
Kulawong Talong with flavor of smoked coconut meat similar to the minanok recipe of Paete, Laguna and nearby places.

No reservations required but limited space available around 8 tables. Call Sulyap's contact numbers to be sure.

Kusina Salud
Cafe Lago, on the lakeshore of Sampaloc Lake
El Mare Bulalo on the national highway (opposite the El Mare Buko Pie and Chicken Empanada and pasalubong shop)

Where to eat in San Pablo on the cheap, there's
Clydenjosh Luto sa Lawa for cheap meryenda plus the "al fresco" grills (barbeque, isaw, betamax and other street food) on the lakeshore promenade near the park.

wow. we should visit Sulyap. I also want to create something like that... a sancturay where friends can stay and relax.

Hi,
I was recently in Philippines for 3 weeks holidays and enjoyed the country a lot. It'll be fun to go thru your posts to get another version. :)

the house is magnificent.

i dont get it why people order burgers when you're in places like that?

traveler on foor, also planning of acquiring my own vacation home for relaxation someday...mauna ka, i'll visit you :P

nisha, glad you like my country. will return the favor soon :P

photo cache, don't ask me hehe i held back on my thoughts when i learned what he ordered :P

Exciting food an interesting story make your blog REAL. Thanks a lot!

luigi, it's as real aas it can get. i don't have sponsored posts, advertorials nor hidden affiliations here that's why you'll see occasional thumbs down or bashing :P

am a big fan of good food and nice places to eat them, I really think that this seems to be a trend of nice places where houses are turned into restaurants where you really feel the sincereness of the ambiance. I haven't been to much restaurants of the same type, but this reminded me of Pamana back in Tagaytay. Cozy place and great food.