5 Years After: The Unforgettable Palawan Beach

It's like shooting an episode of QTV 11's "I Survived" when Tutubi went back to Palawan and the first thing he did was visit the beach where the so called Palawan Tragedy occurred that almost extinguished his passion for travel and adventure.

After five years since he nearly lost his life in an undeveloped and unmarked beach in Barangay Kamuning, (not Inagawan as earlier posted), he found the place still the same, as if trapped in time, with the dangerous portion of the deserted beach still looking innocuous sans danger markers.

First in the "reminiscing tour" was a pitstop in front of Blue Sky Sport and Beach Resort, where the group left all of their lifevests, except one, due to the apparently harmless beach. The then German owner of the resort was the one who lent his pick up truck to transport the already pale and not breathing Rolan to the nearest clinic. The resort is reported now owned by a relative of Puerto Princesa mayor Hagedorn. 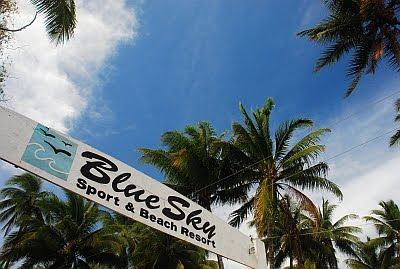 The Inagawan Satellite Clinic where Rolan was rushed after the incident. He was eventually transported to Adventist Hospital in Puerto Princesa City proper where he was officially declared dead. 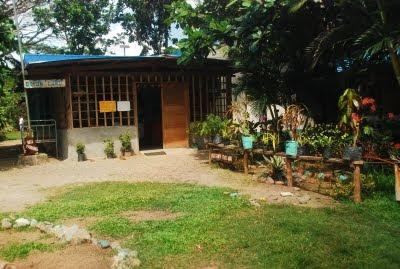 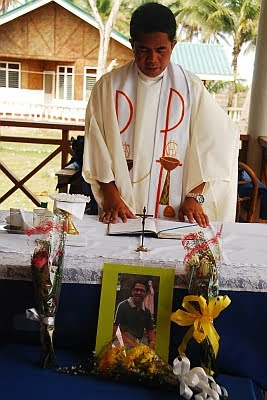 Seeing the exact spot where he almost drowned, the shouts of his three other friends rang in his ear while images of waves trying to swallow him filled his mind, reminiscent of the last scenes of the movie "The Perfect Storm." 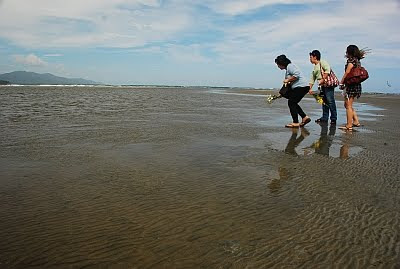 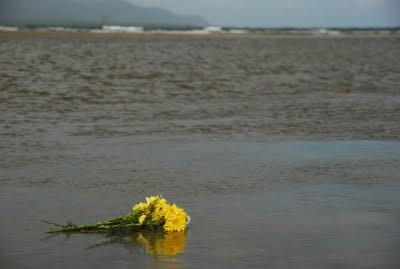 flowers for a dearly departed friend, someone who's like a brother to Tutubi, who's always there to remind him to be careful knowing his adventurous tendencies 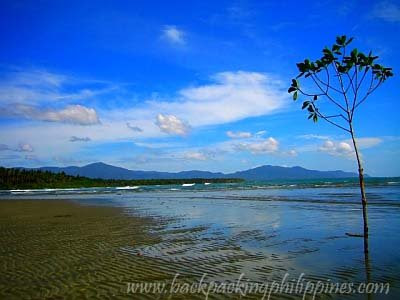 The solitary bakawan (mangrove tree) is now gone but the beach remained the same-- unmarked, undeveloped and waiting to claim its next unsuspecting victim-- something Tutubi feels bitter about the local officials who should be the one putting danger markers even on the roadside if not buoys on the water-- such indifference!

that is a sad story. i agree that locals should be more proactive in identifying danger zones in their areas as part of promoting tourism. i remember in my college days when we went to bataan for a student council seminar (i already forgot the exact place but a remember driving by strands resort) and went swimming. I noticed that the waves were a bit tall and the under pull current of the wave as it retreats back to the sea was strong. As i was not a very good swimmer I contented myself on just jumping up and down on the sea floor facing the beach, letting the waves carry me. Then suddenly i realized that i was already on tiptoes. i struggled to move back to the beach. I saw 3 of my buddies thrashing in the water. Someone shouted for help and i reached out to grab him. The others grab onto the other and manage to come near us and they grabbed onto me. They were all 5 footers and i was a six footer so i had the height advantage. The water was up to my chins already and i was already on tiptoes.I could not move as their arms were all around me. I was thinking if i loose my foothold on the sand we are all gonna die. To gain momentum i sank to allow my toes to dig in the sand then pushed forward. In between gulps of sea water i shouted for my buddies "kampay pre ndi ko kaya!". i dont know how long that was but when i was able to walk flat on my feet on the seafloor i sighed. My buddies scrambled up the beach to the cottages. I lay on the beach panting. After a few minutes I went back to the sea, a bit more wise. My buddies never did thanked me but thats ok. I later learned that the the sea floor slopes sharply a few meters from the shore. When i asked the locals about the dangers of the beach they said with indifference " nangunguha talaga yang dagat na yan taon-taon". wow. Well the morals of the story? one..if youre going swimming learn to swim, and make sure your buddies know how to swim also, if not just build sand castles. two..ask around, there's bound to be a friendly local somewhere who would warn of dangers. three..swim with caution. now when i go to beaches, i bring along a diving mask. i look underwater and see if the seafloor is flat. i have become wary and tell others if i feel an undercurrent.

@ Tutubi.. having a courage to go back to that place is not an easy since it reminds you on how you struggled for your life 5 years ago and Rolan was also blessed to have a friend like you who always remember him.
@ Anonymous - Thanks for sharing your story and for the precautionary measures have to take before going into swimming.

Thanks for sharing your story. It inspired me to look at what is in front of me and face the problems of reality.