An old cake house tucked away in Quezon City's West Triangle area that's been making cakes and other delicious goodies since 1946, Estrel's cake House is an institution that's patronized by people that even taxi drivers know the place when you mention you're going to there.

Tutubi's favorite is Estrel's food for the gods, something introduced to him by a friend years ago but now he's featuring what really made the bakeshop at the corner of Scout Tobias and Scout Limbaga withstood the challenges of several popular and ubiquitous cake houses in more than 5 decades of existence: the caramel cake. 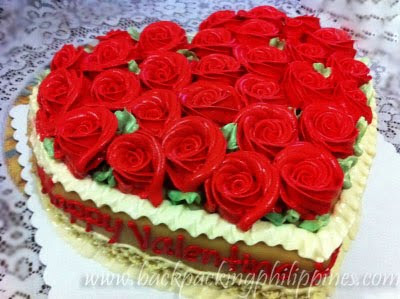 A popular twist for Estrel's caramel cakes is the heart-shaped cakes adorned with red roses, popular not only during Valentines day as an alternative gift against uber-expensive roses and flowers taken advantage by flower-traders in a commercialized Valentines day celebration.

Estrel's cakes are not too sweet, something Tutubi loves, and the chiffon cake is fluffy not stiff plus it has no preservatives making shelf-life limited to only two days (suggest you consume it immediately after buying).

To place orders, you can call Estrel's Cake contact number then schedule the pick up in the Scouts area of Quezon City, about 10 minutes from Tutubi's home. You can only buy caramel cakes in slices (price: P100.00), food for the gods (P380/box) and other goodies at the store. Other items are on per order basis.

How to get to Estrel's?
Project 2&3 jeeps that have Timog on their signboard pass by Timog Avenue then get off at the corner of Scout Tobias (landmark: McDonalds) then walk two corners.

Directions for those with cars, as most of Estrel's customers have, head to Timog Avenue from EDSA then turn when you see McDonalds. You'll see the popular cake house on your left at the corner of Scout Limbaga.

Estrel's is open from Monday to Sunday from 8am to around 7pm, call for your order then pay on pick-up, no deliveries.

As always, this is not a sponsored post. Tutubi paid P900.00, not cheap, for the rose-decorated heart-shaped cake of Estrel's. Besides, Estrel's doesn't need the advertisement :P

This cake is a much better idea than flowers. :)

witsandnuts, yeah, you can eat it unlike uber-expensive flowers on valentines day. spend your money elsewhere or give flowers on other days... being practical in these times is practical :P

bw, masarap talaga...not too sweet but spoils quickly due to lack of preservatives. it's also quite near my place :P

sidney, happy valentines too. yeah, long time no see,my friend. been more of a father than a traveler these days

just to get this, i would be willing to celebrate v-day.

hoped yours was fun.

I grew up in QC but didn't know about this ngayon lang. Anne even spent a part of her childhood in Examiner near Times pero d nya rin daw alam to.

We have something similar here in San Mateo called Prima Blend. Thank you for sharing daan kami jan sa Estrel's.