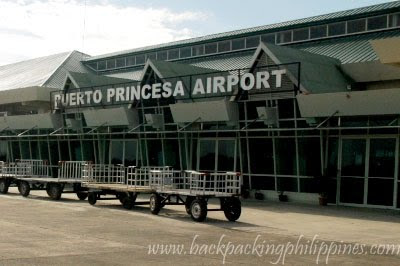 Flights to Puerto Princesa from Manila are available via Philippine Airlines (PAL), Cebu Pacific, ZestAir and SEAIR. Cebu to Puerto Princesa flights also served by some of the mentioned airlines. (please visit the airlines' official websites for the latest flight information)

As of this time, there's only one airport x-ray machine for security and checking of hand-carried and checked-in baggage.

A small convenience store for snacks and last-minute pasalubong shopping is inside the waiting lounge. There are eateries and restaurants outside the airport terminal for those who need more than a sugar fix. 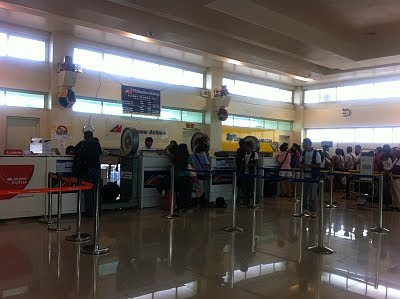 the departure check-in counters of PAL, Cebu Pacific and AirPhil Express. Not shown are those of ZestAir and SEAIR

There's a small conveyor belt at the arrival area while porters abound to assist in carrying your heavy luggage.

Vans for hire are available at the airport or through accredited travel agencies and tour operators (like Amika Travel and Tours, very near Tutubi's "homestay" accommodations in Palawan)

Tricycles are parked inside the airport to take you anywhere in the city proper or via special trips beyond the city proper, even city tours (e.g. Mitra's Ranch on a hilltop, Baker's Hill and the butterfly garden)

Outside the airport on Rizal Avenue, Puerto Princesa's main road, multicabs and jeepneys ply different routes but the central transport terminal in Palawan is in San Jose New Market (there you can ride jeepneys to Sabang if you're looking for public transportation to the Palawan Underground River), vans for hire to El Nido plus cheap souvenirs and t-shirts, much cheaper than those at Tiangge Tiangge pasalubong and Souvenir and buses to other towns of Palawan.

To get to San Jose New Market from Puerto Princesa City center, you can ride tricycles (fare: around PhP15.00/pax) or a multicab with signboard New Market (fare: PhP12.00)

The Sabang to Puerto Princesa jeepney first trip schedule is at 7am and last trip at 2pm.

Welcome to Puerto Princesa City, one of the cleanest and greenest cities of the Philippines!

related post:
How to get to El Nido from Sabang
Airport Terminal Fees

anonymous,from sabang to honda bay, just ride the jeepneys back to Puerto Princesa city proper and drop off on the road to Honda Bay, then ride a tricycle or walk from there

Hi Tutubi! Thanks for sharing these information. Would you happen to know if the terminal fee in PP Airport is still Php40 as of this date? Can't seem to find when this entry was created. I'm trying to work on my projected expenses. :)

Ha! My bad :D thanks for the reply.

Hi!Just like to ask if you know the last trip from Puerto Princesa to Sabang..we're planning to go straight to Sabang when we arrive at Puerto Princesa and do the UG tour the following morning..

anonymous, click the how to get to el nido from sabang above. it has the info you're looking for :P

We'll be in Palawan this month.. We'll be heading to San Jose Terminal after we check out El Nido on the 27th, in the afternoon. Our flight back to Cebu is scheduled the next day around noon. Can you suggest us a place to stay for the night that's cheap but decent enough?

hi,will b n palawan 4 3days/2nights. pls. suggest wht things 2 do. w/c is better 2 stay @ p.princesa hotels then have tour 4 d nxt 2 days in sabang or go direct 2 sabang then head back p.princesa on our last day?

hello, is there a cheap way to travel from el nido to sabang? thanks..

traveljunkie, how to get to sabang from el nido? two rides. bus to puerto but drop off at the junction to sabang then the jeepney to sabang

hello, will be staying at Daluyon in Sabang beach and want to go island hopping at Honda Bay. how far is Sabang to where we take boat to do the Honda Bay island hopping?. saw post on how to get from Sabang to Puerto princesa but no estimated time. thank you!

anonymous, on this post there's an estimated time of 2 hours... :(