Probably the best beach in Ilocos Sur in terms of sand quality, as Tutubi has seen almost all of them, with fine white sand but quite short actually to be developed with numerous beach resorts. Estimated to be slightly more than a kilometer in length, Tutubi saw several cottages, probably for rent, to beach bummers and family picnics and outings, plus an obviously upscale beach resort, reportedly owned by Ilocos Sur Congressman Singson, on the southern end of the crescent moon-shaped beach in Sabangan Cove, Santiago Bay, sometimes called Santiago Cove, in Ilocos Sur. 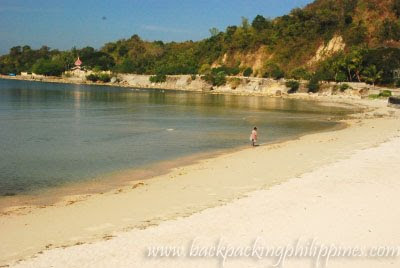 a hidden treasure of Ilocos Sur, a white sand beach without the crowds 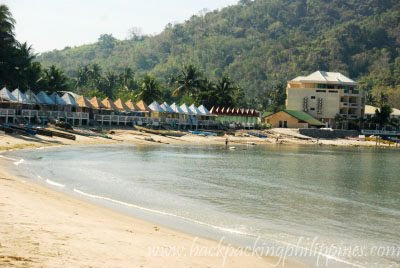 Not too many people on the beach, something Tutubi loves, but probably also due to the time when Tutubi passed by, almost 10 in the morning. No other information on other beach resorts (besides Ilocos Marina Resort Club that Tutubi can't even find official website and contact telephone numbers), overnight accommodations, suitable dive sites and snorkling grounds, island-hopping and other signs of commercial activity, if there's any. 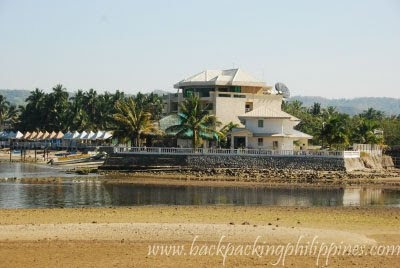 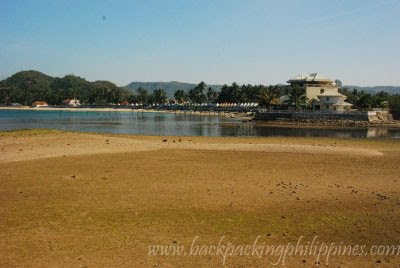 Tutubi recommends this...he's sure that you'll come to love it as it's also less than an hour south of Vigan City. He'll love to stay here longer to swim and stay longer the next time, instead of merely taking a few pictures before going away, as he found it relaxing and not littered with people peddling items, hawking wares or offering "sex on the beach." He loves taking pictures of sunsets and sometimes sunrises, if his inherently lazy bones don't stop him from waking up early.

There you go, Tutubi posted something good about a beach without bashing the crowded and most popular beach down south! :P

---
Sabangan Cove, Santiago Bay, Santiago, Ilocos Sur
Coordinates: 17°17'17"N 120°26'1"E
How to get there: Ride a tricycle from Santiago Church or Santiago Public Market on the national highway. The access road, near the public market, going west (left if you're going to Vigan after passing Santiago town plaza), has directions and signs leading to the place (Santiago Cove).

Tutubi found this lovely beach during his second trip to Ilocos Sur with the aid of Wikimapia and with the coordinates entered into his Garmin Nuvi 1300 GPS navigator.

thanks. i dont think i've ever seen this eachy featured somwhere before.

that's a nice looking resort. If its own by Cong. Singson then the place should be safe ;)

Are they offering sunset beach wedding..and how much the cost of the resort per night

Are they offering sunset beach wedding...how much the cost of the resorts per night.

ive seen and stayed here. my friend own a beach house in santiago cove. we went swimming even at night and it safe. in the mornings, we walked up the southern part to see the fishermen's catch to see what we could grill or cook for lunch. FRESH CATCHES!!! it was really exciting and i plan to bring my family there to see it for themselves