As already hinted on the previous blog post, Tutubi joined his company summer outing at the still under construction "heritage resort" of Las Casas Filipinas de Acuzar where he treated his family to a weekend in the luxury resort merely two weeks after he treated them in Tagaytay.

The location shoot of some of GMA7's soap operas in Pictures: 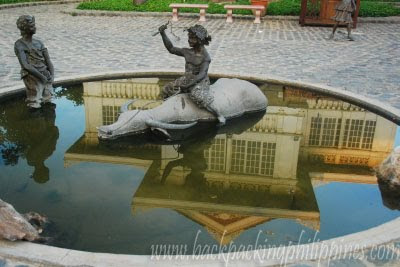 Casa Jaen, an old mansion from Jaen, Nueva Ecija, visible on the "reflecting pool" in front of the old house 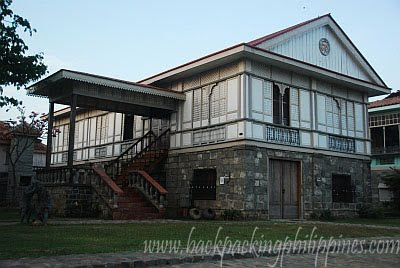 Casa Meycauayan, Tutubi's weekend getaway home, is an old house from Meycauayan, Bulacan with three rooms on the second floor. 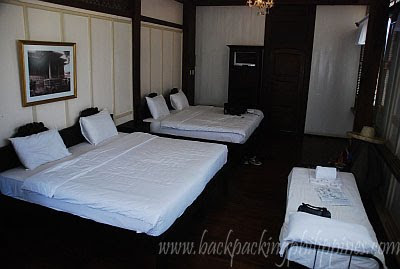 Tutubi's room with 2 King sized beds and two extra beds. No idea about the room rates but Tutubi merely paid PhP1425.00/night price for each of his 4 extra persons 1. For those with children, there's no highchair for your babies/toddlers at the restaurant.
2. Avoid ordering beef dishes. Tutubi ordered bulalo for lunch on his first day and it was a disappointment. No marrowy goodness and the beef was almost rubber-like. The beef mechado for dinner later was both tender and rubbery i.e. inconsistent.
3. Their escabeche maya-maya was a winner with large servings good for 3-4 persons (recommended) and life-saver due to the disappointing. bulalo. Usual dishes on the menu costs PhP300 and up and good for 3-4 persons. Nothing to rave about other food here, just so-so.
4. Daing na Bangus during breakfast was just fried milkfish, not even marinated with the usual vinegar, salt, pepper and garlic.
4. Buffet food for company summer outing was too limited. Company size of 40 persons and yet the prepared food was not enough for 40 pax. This happened in 3 out of four buffet meals which should have been all-you-can-eat (a primary requirement in all of his company outings) that turned out to be eat-what-your-officemates-were-not-able-to-eat; breakfast didn't turn out like that when some skipped breakfast and merely stayed in bed longer due to hangovers or lost sleep.

Cultural show during dinner where guests were serenaded with Kundimans and fold dances. benefit of the community tha provided jobs to local highly evident. The local artist, from Paete, Laguna, turned out to be a classmate of Tutubi's septuagenarian father. 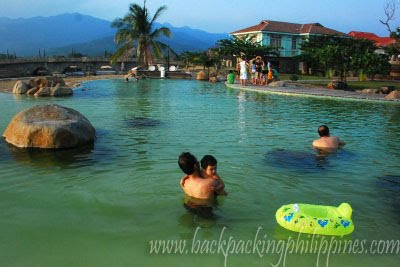 the swimming pool with green water and rocks simulating a "sapa" of one's childhood.

La Piscina, the resort's swimming pool made like a stream with rocks is only four-feet deep, good for families and toddlers, but Tutubi prefers something deeper and probably an infinity pool.

The nearby beach of Bagac has fine gray sand but the waters may be a dangerous when waves come. Depth of beach water falls drastically after a few meters, evident from the color of the water from light blue to dark blue.

Bathrooms equipped with hot and cold showers and bathtub, quite roomy but slippery wooden flooring (you're in an old house with no original modern bathroom amenities, remember?)

Safety deposit boxes in rooms but no instructions were posted on how to set the PIN, thus Tutubi didn't bother to use it.

No in-room telephone lines installed, it's difficult if you need help for room service, you need to go out to the front office, quite a walk (or a mobile phone call away), but what if it's too hot or it's raining?

Staff were courteous though as the resort is managed by Genesis Hotels but there was no dedicated account officer/coordinator to handle Tutubi's company's needs, something sorely lacking and a regular at all hotels and resorts he's visited involving company events. What if you're having your dream wedding/debut there? Tutubi's officemates had to coordinate with front office who were also busy attending to other guests (from MacroAsia) and some daytrip tourists.

Check-in and Check out hassles:

Imagine Tutubi got delayed in leaving the resort due to unusual problems encountered by his other officemates e.g. overused towels and missing bathroom mats that his officemates denied, probably due to improper inventory. This is the first time Tutubi encountered problems like this...again-- overused towels, only at Las Casas Filipinas de Acuzar!

Honestly, Tutubi enjoyed his stay at las Casas Filipinas de Acuzar simply because he was with his family in such a luxurious place, but the "heritage resort" lacks the feel of other high-end resorts that Tutubi has visited, despite his being a budget traveler. The resort though is still under construction where probably more towns will lose priceless old heritage houses to be transplanted here.

This is a perfect place for a summer getaway! what are the rates?

faith, rates are posted on las casas' official website. quite pricey though. will also ask for day tour rates

so you can choose an ancestral house to be your place for the night? other than the pool what other day activities can be had when you visit?

photo cache, not my choice, i was booked there by my officemates. the other option is the hotel, a replica of an Escolta hotel...will post pictures later...other activities? videoke up to 10pm only, billiards, large LCD TVs in each house but shared with other rooms, pretty boring actually. i can't stay there beyond 1 day, besides, it's expensive and I didn't like the food at the restaurant.

i enjoy my stay there although we only have a day tour. they have new houses like the house of mother of dr. jose rizal in binan laguna is now here in las casas.