Just for your information on where to eat in Sabang, Palawan, Robert's Restaurant and Rooms on Sabang Beach offers all-you-ca-eat buffet for weary visitors to Palawan Underground River.

Tutubi and friends found the offer on the beachfront ok with several Filipino dishes offered against ordering on the menu ala carte which takes time and more expensive than the already available lunch buffet meal at a price of PhP200.00. 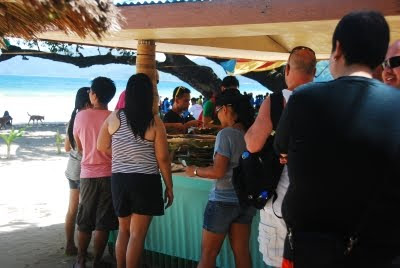 there originally was one buffet table with a long queue of hungry tourists, including foreigners but another table was put up to accommodate other people including Tutubi's group. 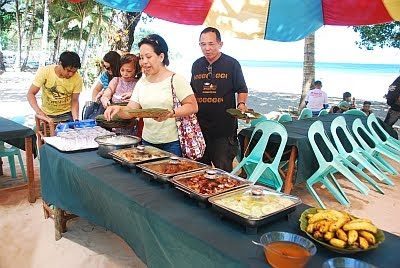 served on the buffet table was rice all you can, binagol soup (recipe much like chicken tinola but using coconut water instead of water), three native dishes inlcuding grilled liempo, chicken adobo (better than the usual adobo, with the right contrast of salty, sour and spicy tastes), cucumber salad, bananas and a bottle of soda.

With lunch set on the beachfront of Sabang and only for PhP200.00, it's already a good deal for a touristy place.

I would like to post a comment in regards to Robert Eatery. We are 8 people in a group to see the underground river on November 15, 2011. We had our lunch at this eatery at 12 noon while waiting for our scheduled departure for the river.The food was ok for its buffet, but the selection is kind of limited.Most of the time it runs out due to the number of guest. Food can be rated at 4 on a scale of 10.Its what you see and its what you eat, unless you go for the orders inside.Reason is it was part of the lunch package that you get when you go on a tour. Also its where the tour company somehow contracted to bring its guest. One very important part that I want to bring out is the restroom facility located at the back of the restaurant.Though it is maintained regularly on its cleanliness, or washed it most of the time, the commode is not up to tourist standard.Just imagine yourself sitting down on a foot high stool,no seat, just the bare stool to used and most of all no available tissue if you didnt bring one.I consider this to be filthy, and below par, below tourist standard. This is a reflection of the Sabang tourist industry and I would like to take this opportunity to reach out to the Health Department of Sabang municaplity or to the Provincial Health Department of Palawan to closely look at this issue for the sake of the tourist industry in Palawan. Something need to be done about this.The inclusion of the Underground River to the list of Wonderful Places on earth is something to consider about in relation to the sanitation of eatery and restaurant along Sabang beach.The rise of future tourist will surely affect the image of Palawan as a whole when you look at how this rest room facilities are built and maintained. No matter how beautiful a place is if there is one thing that tarnish its images, the negative views will always be the matter to be the talk of the town. This is an example right now that I want to bring out. Hopefully something will be done about this. /