A true-blooded Paetenian, Tutubi was a "Batang Sampaloc" for 10 years, where he and his siblings hopped from one "room for rent" starting from one on Algeciras St. near the PNR train tracks where the PNR train became the alarm clock with loud horns and "earthquake."

From Sampaloc, Tutubi transferred to Reten near P. Noval, Miguelin, Sulucan (near the twin churches of Bustillos), Lardizabal (near Legarda) then "leveled up" to several "apartments for rent." On Prudencio St. From Sampaloc near Balic-balic, he transferred to Makati near Rizal Village, lived for a short time in Pasig City near Kapitolyo then finally to his present home in Quezon City. 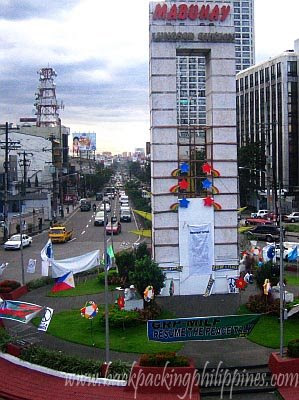 The Mabuhay Rotonda marks the boundary of Manila and Quezon City. At the back is España, Sampaloc, Manila going to Quiapo

This is just one of a series of posts on Jose Rizal in time for the celebration of his 150th birthday on June 19.

History Behind The Rizaliana Streets of Sampaloc, Manila

You may view a Map of Sampaloc Manila here for your reference.


Named after Padre Florentino in Rizal’s second novel El Filibusterismo. Padre Florentino was priest and a friend to some of the novel’s characters. On P. Florentino street stands the transmission tower of Philippine Long Distance Telephone (PLDT) near Welcome Rotonda (now Mabuhay Rotonda).

An erroneously spelled street named after Francisco Pi y Margall, a "friend" of Rizal, and president (for only more than a month) of the short-lived Spanish Republic of 1873. Pi y Margall advocated autonomy for Spain's colonies including the Philippines as well as other "radical" ideas at the time.

The rural town of Mindanao where Jose Rizal was exiled, built a home, school from his lottery prize, and "married" Josephine Bracken, now called the Shrine City of Dapitan, part of Zamboanga del Norte. Dapitan hosts several of the 27 places with historical ties to Jose Rizal listed in the Lakbay Rizal (Rizal@150 Heritage)

One of the pseudonyms of Jose Rizal (Laong Laan meaning in English: Ever Prepared). In a letter to Marcelo H. Del Pilar in 1890, Jose Rizal wrote:

“In my boyhood it was my strong belief that I would not reach the age of thirty, and I do not know why I used to think in that way. For two months now almost every night I dream of nothing but of friends and relatives who are dead. I even dreamed once that I was descending a path leading into the depths of persons seated and dressed in white, with white faces, quiet, and encircled in white light. There I saw two members of my family, one now already dead and the other still living. Even though I do not believe in such things and though my body is very strong and I have not sickness of any kind, nonetheless I prepare myself for death, arranging what I have to leave and disposing myself for any eventuality. Laong Laan (Ever Prepared) is my real name.”

Laon Laan is a one-way street going north while Dapitan allows the opposite south-bound direction going to Quiapo. These two streets are where the Quiapo - Dapitan jeepneys ply their route. Near the ends of these two roads, you can find Dapitan Arcade, where you can buy housewares and native products at bargain prices.

From high school days with the studies of Noli Me Tangere and El Filibusterismo mandated by the Rizal law (principally authored by Sen. Claro M. Recto and fought by the bishops and priests of the Catholic Church like the now raging RH Bill), Maria Clara was the love of the character Crisostomo Ibarra of Noli Me Tangere.

Other minor streets of Sampaloc with Rizaliana links are Basilio, Sisa, Ibarra and Crisostomo all from the national hero's first novel while Simoun, from the vengeful Don Simoun of Rizal's second novel who's actually Ibarra disguised as a jeweler from Cuba.

The next streets parallel to Maria Clara are Calamba, after Jose Rizal's hometown and birthplace. On Calamba, sandwiched by Sisa and Instruccion Streets is the Nuestra Señora del Perpetuo Socorro Parish (Our Lady of Perpertual Help Parish). Makiling is named after the mystical mountain near Calamba and cited in some of Rizal's works. 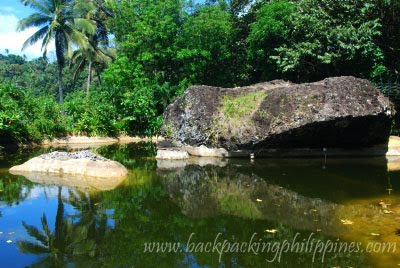 picture of Mi Retiro Rock in Dapitan where the eponimously titled poem was written. The rock provides a good view of dapitan harbor from Jose Rizal's estate in Talisay, Dapitan.

After Rizal's best friend Prof. Ferdinand Blumentritt to whom Rizal exchanged many letters. His mastery of the Tagalog language made Rizal write him, along with a Tagalog book on arithmetic, that marked the beginning of their beautiful friendship.

Another one of Jose Rizal's pen names, it means "untouchable" from the Tagalog "di masalang" now used as one word. At the intersection of this street with Maria Clara and along Dos Castillas Street stands Dangwa (Manila Flower Market) where fresh flowers from Baguio City are unloaded weekly by Dangwa Bus Company (thus the name Dangwa Flower Market). The other segment hosts several shops selling "chop-chop" parts of antique, or rather, heritage houses.

Morayta Street, now called Nicanor Reyes where Far Eastern University (FEU) is located, was named after University of Madrid (Universidad de Madrid) professor of history Miguel Morayta. It was through Prof. Morayta that Rizal became a freemason under the Gran Oriente de Español, where he adopted Dimasalang as his Masonic name.

Near Morayta and University of Sto. Tomas (UST) are the streets of P. Noval (Padre Noval, where you can ride the PVP Liner bus to Ayala Avenue in Makati), P. Campa (Padre Campa), and P. Paredes.

Lastly, España Boulevard, Sampaloc, Manila's main street is not named with Jose Rizal in mind but it's a condition stipulated on the deed of donation of a portion of Dominican land of UST that the street fronting the oldest university in Asia be named Espana.

España therefore is one of the those streets of Manila that stupid, historically-challenged, heritage-agnostic politicians of Manila cannot change lest the street reverts to Dominican hands.

I read Noli Me Tangere and recognized a lot of the street names taken from the book.
I too lived in Prudencio until I was about 8 years old. I visited last year and I didn't recognize the place. It's been over 40 years since I've seen the area, so it was quite a shock.
Heidi

Interesting! I grew up in Sampaloc and all those Rizaliana streets were my turf but for whatever reason, I never associated them with Rizal. They were just street names to me.

There is also a street in Sampaloc called Josefina, named after Josephine Bracken. This is perhaps the Philippines' only gesture of remembrance or tribute to Rizal's dulce extranjera.