For quite some time, Tutubi wanted to visit the chess-themed restaurant of Pan de Amerikana in Marikina to play chess on its centerpiece giant chessboard but his plan, always don't materialize as it's quite far from his home in Quezon City.

Pan de Amerikana, however, opened a newer branch on Katipunan Avenue in Quezon (in addition to it's branches in Greenhills, San Juan and Makati Avenue) where it used an upside down house that attracts the attention of passersby to the Quezon City road dotted with restaurants and gardening/landscaping stores.

Tutubi went to Pan de Amerikana with his family for a hearty lunch of Marikina dishes e.g. everlasting, waknatoy and other Filipino specialties and also to check out the inverted house interiors. 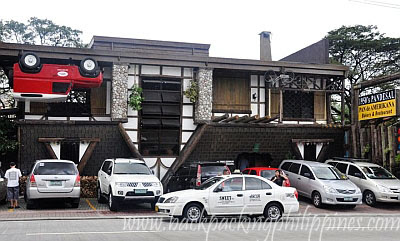 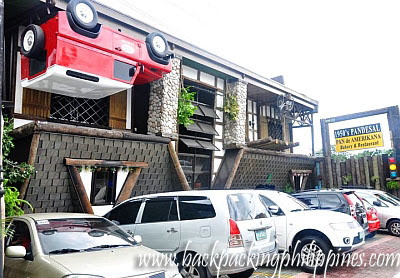 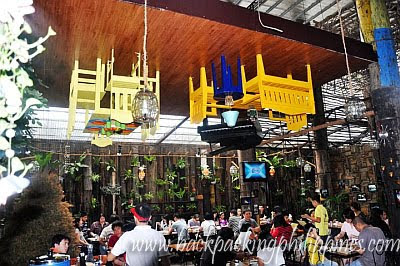 The star of the bakery/restaurant is Pan de Amerikana's giant pandesal that's as big as a loaf: 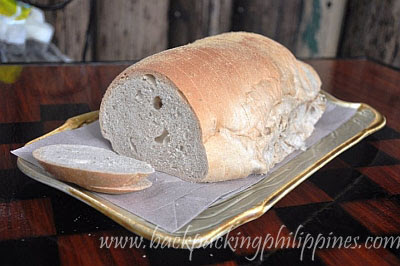 Food: nothing to rave about, rather ordinary but not bad also. The only lowdown was the banana con yelo with not so tender saba.
Price: unbelievably almost carideria price with dishes as low as PhP60 per order
Ambiance: nice inverted house setting, lots of chess tables and chess aficionados hanging out. No air-conditioning but the airy design and high ceiling makes up to effect wind circulation and ventilation of the place.

How to get to Pan De Amerikana:

Tutubi is not aware of any public transporation that passes directly on the segment of Katipunan is it's near a "rich" enclave. take taxis either from Cubao, MRT or Ortigas Station. For directions to Pan de Amerikana, from Makati, it's a straight drive on EDSA going to Quezon City, turn right to White Plains then left to Katipunan. Pan de Amerikana comes before Petron to your left and you won't reach the intersection of Boni Serrano.

I'm quite amazed with the interior design of the restaurant. Having an inverted living room on its inside, I think it's unique. With bread's name-Pan de Amerikana, is it American Bread in English?

I'm astounded by this, including the car and the tables and chairs. very unique, also funny. I wonder how they managed the car to place upside down; impressive.

cagayan de oro2011, american bread in english is right. don't know the history behind the name even if they're main product is the pandesal which is not american

nonoy, the car has no interiors, only working lights so it's just chassis...

I wonder who planned and designed it. Must be a good draftsman or an architect. I would want to go in and dine.