Inijakan Island or simply Inijakan, part of General Island in Cantilan, Surigao del Sur is a private resort and refuge of the true hero of EDSA-- Gen. Charles Hotchkiss (who was then a major when he defied then President Ferdinand Marcos' orders to attack the rebels holed up in the military camps during EDSA People Power revolution).

Tutubi was able to gain entrance to the private property built out of a cove on Inijakan Island (or General Island) through an employee of Cantilan Bank. He was able to spend several hours, ate a full meal mostly of kilawin and grilled fish, before hurrying back to Cantilan town proper before dark. 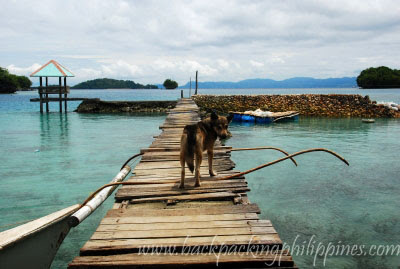 the wharf of Inijakan closely guarded by a dog

A breakwater or seawall was built to close the cove to prevent fishes inside from going out of the sea. Fishes reportedly seen were barracudas (supposed to be deep water predators), small flying fishes, lobsters and even the expensive and endangered mameng (napoleon wrasse). Lush forest lines the shore with wild plants, monkeys (philippine macaques), trees and birds can be seen flying around. 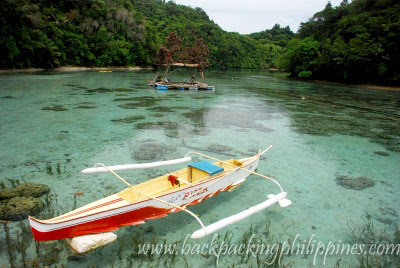 a racing boat parked at the green lagoon of Inijakan. 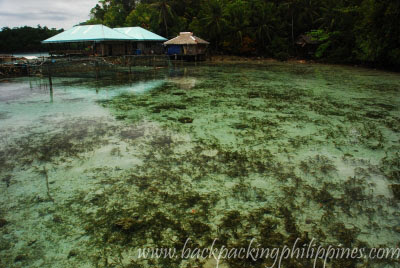 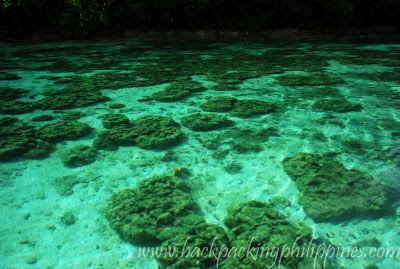 many corals can be seen without getting wet but signs of dying and coral bleaching are visible. The man-made seawall that prevents water and waves from reaching them may have contributed to the death of corals. 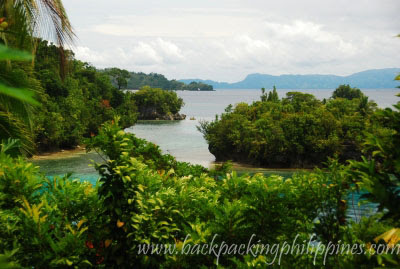 the view from the highest part of Inijakan, where a chapel stands. There supposed to be a beautiful Ayoke Island nearby but was not able to visit by Tutubi. He wanted to see and taste a kolo fruit there

Also located on General Island is the reportedly enchanted Lake Danao where the tide is opposite that of the sea i.e. high tide when the sea is low tide and vice versa. A few minutes trek is needed to reach the lake but again, due to lack of time and clothes, was not even attempted by Tutubi.

As mentioned earlier, this is a private resort/hideaway of the Hotchkiss family of Cantilan but it's open to daytrippers, particularly wedding pictorials (prenups) for engaged couples. Tutubi has no information on contact numbers and rates though but you can try asking from people of Cantilan.