Food historians said that the truly Filipino food devoid of any foreign influences is the kilawin (kilaw or kinilaw) where the food is not actually cooked but soaked in vinegar and spices. It's also the local food particularly liked by Tutubi's friends from France that they intend to duplicate at home later.

Nope, this is not the actual Kinilaw Festival celebrated annually on October 2 in Surigao City. This is the "fiesta" prepared by Tutubi's friends from Cantilan while in Inijakan: a kilawin feast with the freshest ingredients

Tutubi just watched as his friends took out the goodies they bought from Cantilan public market and the others gathered fresh seaweed, called lato, also to make kinilaw, the almost equivalent of the ceviche of central and south America, which uses lemon instead of vinegar. 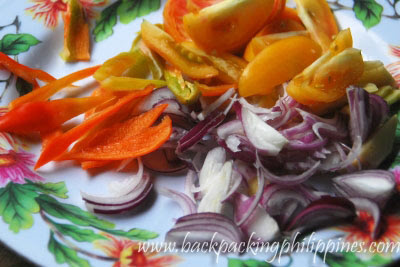 the freshest ingredients of a kilawin recipe: onions, ginger, garlic, bell pepper and chili pepper. In some parts of Mindanao, coconut milk is added to the recipe 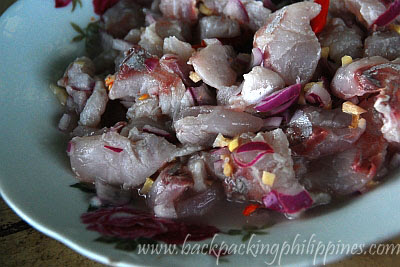 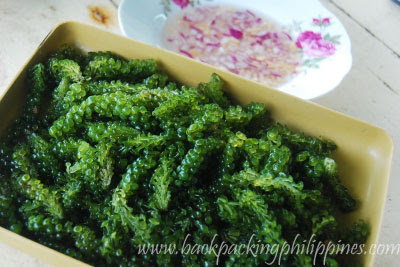 freshly-gathered seaweed, locally called lato. You eat it by dunking the green thing in spiced vinegar

Now, what are the secrets of the best kilawin recipe? The best way "how to make Kilawin" is to use the freshest ingredients, the right vinegar that's not too sour (tip: don't use commercially available vinegar, try the local ones), prepare it fresh, consume immediately (don't let it stand for more than an hour, and lastly, prepare it with love!

The lato is called umibudo (sea grapes) in Japan and is very common in Okinawa salads.

I miss the seaweed kilawin.. they have them in Jap restaurants here but not quite tasty as ours.